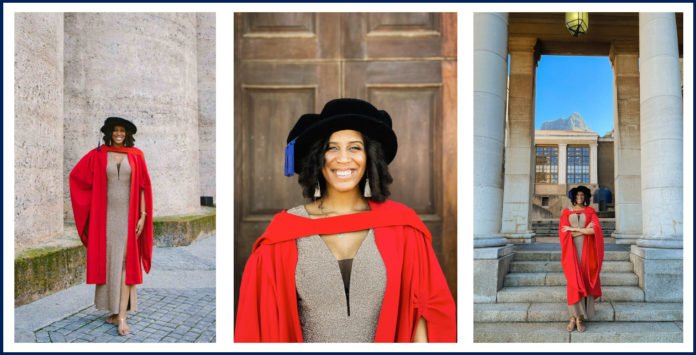 With her doctoral thesis, Dr Simone Peters aims to show an alternative narrative of ‘coloured’* identities, specifically ‘coloured’ men. Dr. Peters’ research, “Researching Race, Space and Masculinities in Bishop Lavis: A critical ethnographic study” was published earlier this year. The Daily Vox spoke to Peters about her work and the shifting narrative on “coloured” communities.

Origins of the study

Peters recently graduated from the University of Cape Town with her thesis. She identifies as coloured. In her research, she wanted to make sense of coloured people’s experiences and identity, especially coloured men, in a post-Apartheid South Africa. The term coloured is complex and people should have the scope to navigate using the term as it is a personal journey, Peters said. She focused primarily on masculinity studies. In her readings, she found a lack of studies on coloured men in academia.

Peters said the research mostly showed a coloured masculinity which didn’t look very different to black masculinity. Instead, she said: “I wanted to know how are coloured men researched and how they are spoken about.”

Peters said white academics who only study gangsterism tend to give a narrow view of coloured masculinities. She wanted to challenge this and show a variety of narratives, especially as a coloured person who grew up on the Cape Flats.

“We need an upward mobility of coloured people into academia, so that we can write about our communities,” said Peters.

Read more: Calling myself “Coloured” gives me the ability to choose new meanings for myself

In her study, Peters found the stereotypes around coloured people are harmful and adversely affect young coloured men. When speaking to young coloured men, she found that they were aware of how people would clutch their bags, as they walked past them in affluent Cape Town areas. The men said they are being judged on how they look, when all they are doing is taking a walk to get an ice-cream on a day out.

“Our communities are complex and there is more than one perception of our communities. Bishop Lavis is not just crime-ridden, kids are outside playing marbles, and people are living and thriving in these communities,” said Peters.

Peters found that the negative stereotyping has socio-economic effects too. Men do not want to join gangs, and they try to seek out opportunities. However, when someone hears they are from a coloured area, there is a perception that they must be involved or connected to crime. Criminal activity is confined to small enclaves in coloured communities, and these stereotypes have existed since colonial and apartheid eras, Peters said.

From her work she found that coloured people are constantly trying to navigate spaces. They do this by masking how they speak so as not to be stereotyped. She said we need to get to a point where intelligence should not be measured by your accent.

“We are not taught about how the KhoiKhoi fought wars and won against colonists. All we are taught at school level is that Krotoa was a drunkard, which is wrong,” said Peters. Krotoa was a multilingual Khoi woman diplomat, who brokered peace deals in the first KhoiKhoi and Dutch wars. Recently Stellenbosch University announced they would be renaming the W Wilcocks building of the university the Krotoa building.

“We also need to be taught about coloured Apartheid struggle heroes like Ashley Kriel and not only at tertiary level like me when I first read about him,” Peters said.

Peters said when speaking to older people in Bishop Lavis who fought in the struggle, she found they have been silenced in the larger historical framework of South Africa’s liberation. “There is no interrogation into things like the dialect of Kaaps, which is a language of resilience and resistance, as opposed to it being the language of lazy, illiterate people,” she said.

Read more: UWC to develop the first dictionary of Kaaps

Peters said you cannot research masculinity without violence coming up. She said the men spoke about how they see women as nurturers. They also spoke of instances where they were pressured into being violent by women, to show their love and  to earn respect. In her study she saw a move away from men using violence to get respect. However, given the high levels of gender-based violence in South Africa- there needs to be a deeper understanding of violence from men, she said.

“There needs to be early interventions to decrease violence and eradicate it, so men ultimately behave differently,” Peters said.

Read more: The Construction Of Masculinities, The Rule Of Law And Gender-Based Violence

*A note from Dr Simone Peters: “‘Coloured’ in her research refers to a group of heterogeneous people who are of mixed ancestry. ‘Coloureds’ are also referred to as ‘mixed-raced’. In her thesis she acknowledge that this racial group is a social construct and contested term, brought about by the apartheid state, which is why the term is place in inverted commas.”