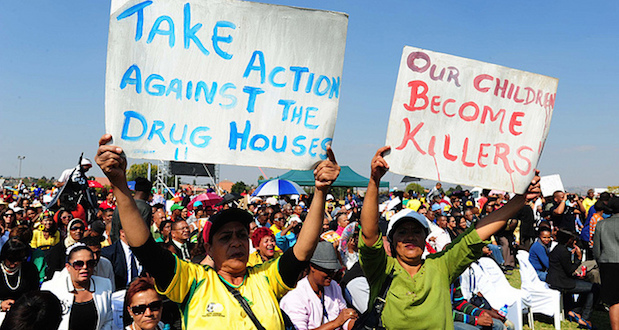 A recent study conducted by the Soul City Institute for Social Justice has revealed a few harrowing stats when it comes to drugs and South Africa. Researcher, Bongiwe Ndondo, outlined these facts at a presentation of a literature review that took her four months to complete.

Did you know, for example, that South African drug usage is double that of the worldwide norm? Or that current information suggests that illegal drug consumption costs the South African economy 6.4% of South Africa’s gross domestic product, which is about R136 billion per year?

Around 3000 South Africans have been jailed for drug trafficking around the world, and most of them are women. #DrugsAndYoungWomen

The National Drug Master Plan uses the term “drug” to refer to a variety of substances, including both prescription and non-prescription medication, alcohol, tobacco, inhalants/volatile solvents, and other dependence-forming substances. According to Ndondo’s research, the main drugs abused in South Africa are cannabis, meth, heroin and cocaine, accounting for 86% of all cases treated for drug abuse in South Africa in 2012.

Dr David Bayever, deputy chairman of the Central Drug Authority (CDA), called drug use, misuse and addiction a “bio-, psycho-, socioconomic problem,” and emphasised the importance of community support when it comes to how drug addicts are treated. “Substance abuse disorders are a form of mental illness. Addiction is a health condition. We need to support addicts, not stigmatise them. The only time drug users had control was the very first time they used it.

“People who use drugs are looking for something recreational to change the way that they feel. We need to ask why they want to change how they feel, and look at broader societal issues such as poverty and unemployment, as a cause.”

Bayever said that rehabilitation should not be seen as the final solution when it comes to helping drug addicts, and that focus should be place on assisting individuals to be reintegrated into society. He highlighted the role that the justice system also plays a role in the way that they treat drug users. “Locking a person up for smoking a stompie is only opening them up to a network of people in prison who will expose them to more drugs.”

Rehab doesn’t just fix an issue after 6-8 weeks. There needs to be a continuum of care- reintroduction into society, community capacitation.

Despite the fact that much research has been done, there remain a few grey areas when it comes to drug statistics in South Africa, particularly when it comes to a provincial breakdown of drug use. According to Ndondo, this is due to a lack of data from all regions, which becomes complex based on a few factors. One of the key issues, Bayever notes, is the fact that the same drugs can have different names in different regions. “Woonga, oonga, sugars and nyaope are all the same substance,” he offered as an example.