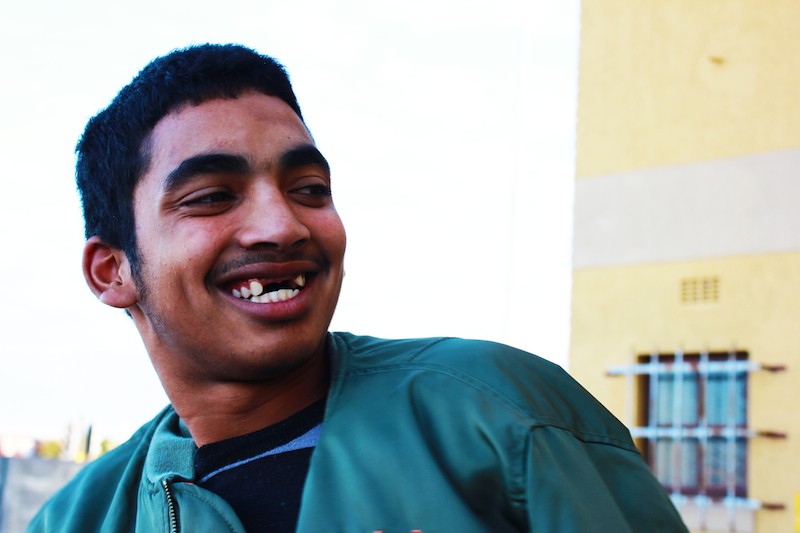 In 2014, youth on the Cape Flats are waging a different war to those who died on June 16, 1976.Â According to the provincial Department of Community Safety,Â 47% of South Africaâ€™s drug related crimes in the country were carried out in the Western Cape in the past year.Â Itâ€™s estimated that a quarter million people in the province use crystal methamphetamine or tik, and 36% of these were teenagers. Is this the freedom the youth of â€™76 imagined? Report by RAâ€™EESA PATHER.Â I was in Grade 6 when I first used tik. In Grade 9, I started using heroin, and after the end of Grade 10 I got expelled and I got taken out of Windsor High School and I was put into Lotus River High School. I would say it was influence and that whole â€˜wanting to be coolâ€™ thing. The whole gangsterism thing always had my interest. To me they were cool, and they had more control. I didnâ€™t have a father figure to guide me, but Iâ€™m not going to blame it on that. It was my choice that I turned out the way I am.

Apartheid is also a big thing. Thatâ€™s when the number gangs were born, thatâ€™s how it spiralled out of control. As a coloured person, you see a white person driving a nice car and then you have that hatred, and that same hatred relates back to that time of apartheid. I still feel its still apartheid. Lots of my friends, lots of the people I know still feel that the white person is better and they need to do whatever it takes to be better than the white person. And now itâ€™s the other way around, the majority of coloured people are still just stagnant. I promise you, thereâ€™s small children thatâ€™s 14 or 15 walking around with guns right now. They think itâ€™s coolâ€¦ they donâ€™t realise they doing something thatâ€™s to their detriment. I was doing marijuana. I started when I was 15. Doing drugs affects your brain, no-one can cope on drugs. Itâ€™s impacted my life badâ€¦ if I didnâ€™t have money I used to steal from people. I think young coloured people donâ€™t know they as good as everyone else, because they never found their passion. I found mine, I want to be with the sea cadets, so I have something I can work towards. Coloured people still feel a bit left out. Drugs is like a status thing especially in the coloured communities. If you donâ€™t do it, then youâ€™re not that popular. They donâ€™t feel like they have opportunities. When you look at the news you donâ€™t see coloured people.

The people who protested in apartheid will think they did nothing, that the protests that they did was for nothing, because the coloureds of today never adhered to it. Itâ€™s not democracy when thereâ€™s gangs and drugs, they just want to kill people and take drugs.

I never celebrate Youth Day, itâ€™s just like a holiday. Back then it was a struggle, now we have freedom. Itâ€™s normal, I feel normal that Iâ€™m going to be here [in rehab] for Youth Day. Iâ€™ve been on tik for five years. I did it because of depression and bad friends. My hopes for the future, are to stay clean, stay positive and have a stable job. When I was using, I lost a lot of things family-wise and friends-wise. I was thrown out of the house, and it made me more mad. I started using more. We havenâ€™t really come a long way since apartheid. All the gangsters are now dying, but the young ones are coming up to take their place. They think itâ€™s cool. Then, they were fighting for us, but now they fighting for turf and drugs. For gangsters, thatâ€™s their way of making money. Itâ€™s easy for them because the majority of the people is on drugs already. Iâ€™ve been doing drugs for about five years. I started with friends to experiment and it when wrong from there. Nowadays drugs are out of control, most of the people, even elderly people abuse drugs. For the youth there is hope, if they have something to do they can get out of it. It affected my studies, my work, my relationship with the family. I stopped going to classes. Itâ€™s all the young guys committing crimeâ€¦ the older guys influence them. They feel lonely and they feel left out. I just want to better my future for me and for my family, and not disappoint them.

I think people who fought for our freedom would be disappointed because they would think itâ€™s all for nothing. But they didnâ€™t fight for nothing, we wouldnâ€™t have the opportunities we have now if it wasnâ€™t for them. I think we waste those opportunities because we donâ€™t actually realise what they did, we werenâ€™t there but from all the stuff we hear from elderly people, it is things that couldâ€™ve happened to us also if they didnâ€™t do what they had to do. Iâ€™ve been doing drugs for eight years, I started with dagga [marijuana]. I just wanted to fit in with my friends. My mother, we donâ€™t have a relationship today after Iâ€™ve been taking drugs. My mother threw me out, I had nowhere to go, so I joined a gang. Afterwards, they left behind because I couldnâ€™t dress like them and all of that stuff. You need to show yourself, what youâ€™re capable of.Â  I used to steal phones and sell it off for them. We young people are lonely, and we canâ€™t stand by ourselves so we need another brother to stand with us. But nowadays, they donâ€™t stand with you. I was stabbed in my head at the robots by another gang, and they just left me.

At they end of the day they fought for us during apartheid, and weâ€™re thankful, but itâ€™s about what you going to do out of it. Iâ€™m not proud of what Iâ€™ve been doing, Iâ€™m not where Iâ€™m supposed to be. I want to be a fireman, I want to save people because Iâ€™m also a person. You know what they told us in class: It doesnâ€™t mean because you stay in Mitchellâ€™s Plain, you must act like the people who stays in Mitchellâ€™s Plain. You can be like you want to be. People always blame the place, itâ€™s not the place, itâ€™s you yourself. I want to thank them, those people who fought for us during apartheid, wherever they are for fighting for our rights and for having the strength and the knowledge to stand up for us. Iâ€™ve been using drugs three years now, since I was 15 years old. I started with dagga first by school, then I was in foster care by my aunty and when I turned 18, I moved to my mother in Manenberg. I mixed with wrong people, the gangs there, and I started using this drug tik. I smoked tik there, for the whole 3 months I was there. After that I moved to my father in Delft, and I smoked, and I drinkedâ€¦ I did everything. My father kicked me out to my mother, and then she kicked me out. I was smoking, drinking, everything. It affected my life very bad, I didnâ€™t have a house to stay for six months, I used to steal stuff, lots of stuff. I learned that I musnâ€™t take the wrong road again, I must stay focused. I want to set myself a goal, and I want to reach that goal.

I think young people of today â€“ Iâ€™m talking for myself too â€“ I thought it was something normal we can do, but it hit me hard. I think people have forgotten the sacrifices other people made for them during apartheid, because they donâ€™t read the books, the history of it. The children of today they donâ€™t care about reading and seeing stuff about the apartheid and the history of the time. I donâ€™t think they would make the same decisions if they knew how people had fought for them. Youth Day is like a normal day, people just look at it like a normal holiday.