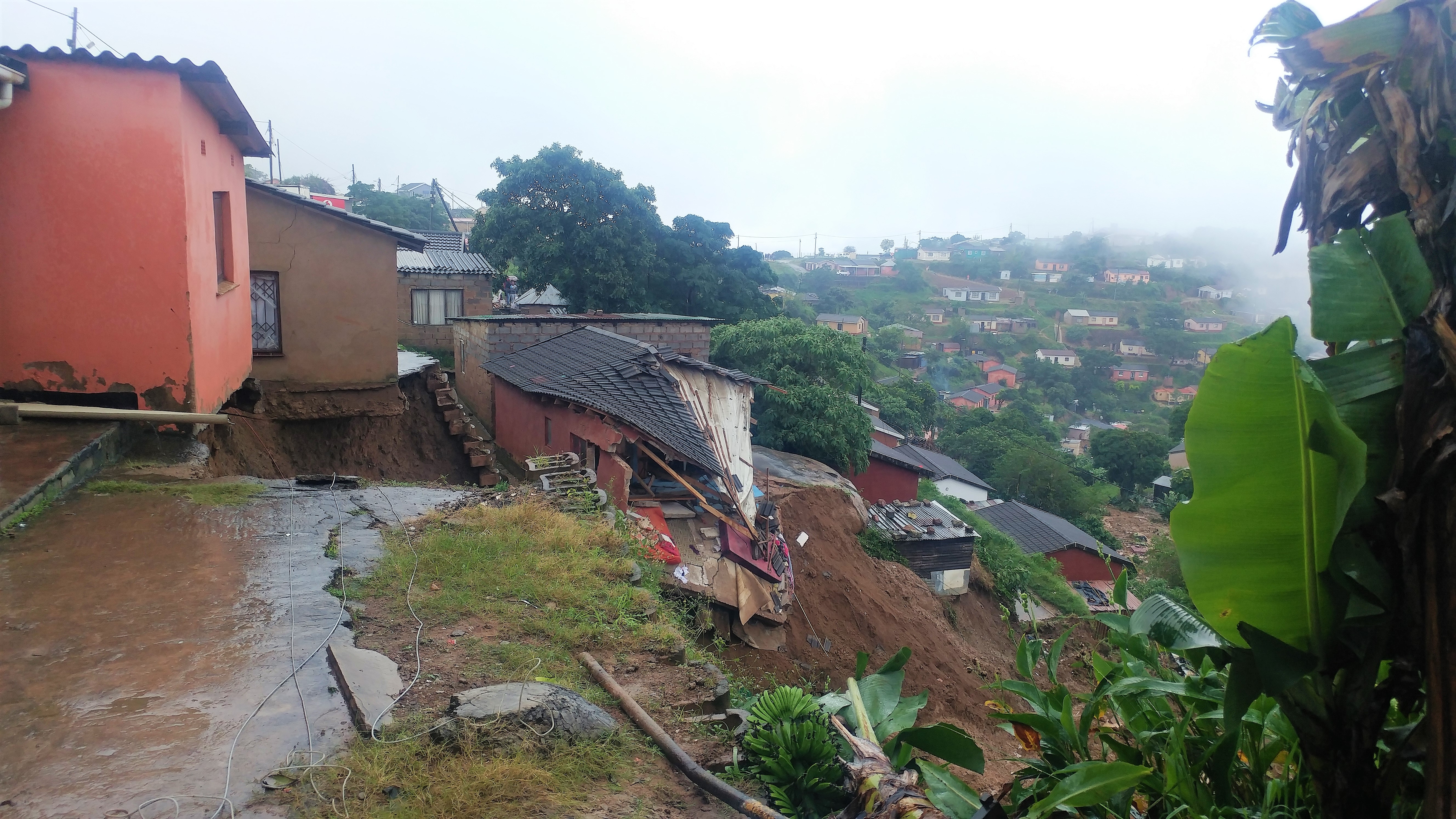 Torrential rains have wreaked havoc in Durban this week, claiming lives and leaving hundreds of families devastated and destitute after homes were swept away by gushing water.

On Tuesday, reports of deaths and injuries emerged on the media following gusting wind and strong incessant rain which started on Monday.

Heavy downpours in KZN over the Easter weekend caused the collapse of a Pentecostal Church in Empangeni, claiming 13 lives.

The deadly rain has seen road accidents, mudslides, landslides and death. When the Daily Vox visited Reservoir Hills in Durban on Tuesday, community members were seated outside watching a river gushing behind what’s left of the houses; some left with only the clothes they had on.

Committee member Mbongeni Jali said people had been up from 12am, when the river which cuts between kwamaMsuthu Informal Settlement started sweeping houses away.

“We are left with nothing, we don’t know what we would do if the rain persists. We have children and they haven’t eaten, no one has. We are all in a devastation mode” Jali said.

Members of this community said their future looks bleak due to the kind of damage that was caused.

Mdumiseni Jwara* sat with his family inside an empty house eating bread and soup. He said this was all they had and doesn’t know what he will give the children as the day goes by.

“My kids are here, they couldn’t go to school because we have nothing. The food we are eating now is all we have and I don’t know what I will give them this afternoon,” he said.

Jali said the community was still waiting for disaster management to come and address them on the way forward.

In uMlazi H section, rescue services with the help of the community had to search for a family that was trapped under rubble following a landslide which collapsed a small house, trapping those inside. Ten-year old Mnotho Mlotshwa was one of the people in the collapsed house, and was declared dead after being buried by rubble.

A neighbour who asked not to be named said to The Daily Vox everything happened in a blink of an eye and the community was still reeling in shock.

“We are all still shocked because everything happened fast. Even if anyone wanted to save them, we wouldn’t have been able to because the way the house collapsed shows that the foundation had become too weak already,” she said.

The neighbour added that this was a cause for great concern.

“We have children that we often leave in these houses when we go to work. What of the storm comes back again and find them by themselves? These houses have proved to be weak from the foundation and can collapse anytime. We are still going to lose more families,” she said.

A video of the collapsed uMlazi house made rounds on social media, with many sending prayers to the victims.

Meanwhile, the KwaZulu-Natal department of cooperative governance and traditional affairs (Cogta) and the eThekwini municipality said in a joint statement that the death toll on Tuesday morning stood at 32, but was expected to rise.

“Most deaths are from Chatsworth, uMlazi, New Germany where two kids below seven years got killed,” a spokesperson said in the statement.

The MEC for Cogta said in an interview with eNCA on Wednesday that the death toll had risen to 51.

The damage on infrastructure has been estimated to be around millions but the provincial government said the correct figures would only be known once the assessments on the ground were concluded.

“At this stage the focus remains on recovery and provision of relief efforts while assessments of damages are underway. We will know the figures when these assessments have been completed,” the government said.