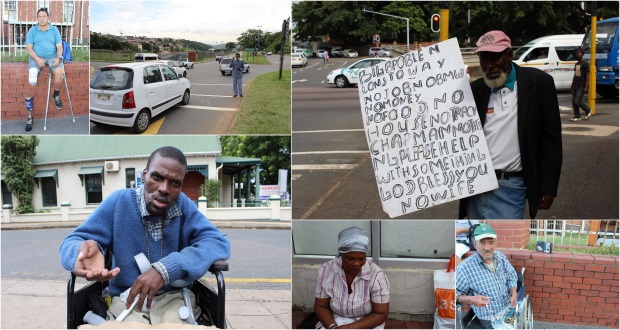 Alongside the tall city buildings, fancy-dressed city dwellers and flashy cars, the homelessÂ are the bitter end of the inequality scale. It’s easy for most of us to discard them as lazy people, criminals and drug addicts without knowing the first thing about them. As QINISO MBILI found out, they have different stories and reasons behind their presence on the streets.Â Nkosinathi Dladla, 36, beggar
I grew up in KwaNyuswa, herding various familiesâ€™ cattle. I never went to school. My sister and I ran away from home when we were teenagers [because] my mother and grandmother had been abusing us. I last saw my sister then but I hear she also lives the sort of life that I live. In 2006, I started getting sick and was admitted to hospital for six months. I found out I had TB, chronic lung disease and Iâ€™m HIV positive. Ever since 2006, I have been in and out of hospital. I spent the whole of 2014 in hospital. Even when I was discharged I was not happy as I had nowhere to go. Life is very hard for me; I have never had an ID book and this means I cannot get a grant.

The life I live is not conducive for a sickly person. As the sun sets I become the easiest target on the street for other homeless people to do as they like to me. My sickness means that I quickly run out of breath and this wheelchair is manual, I have to push my own self and I can only push so much before I run out of breath. Whenever I have to go fetch my medication at hospital, I have to pay the other beggars to push me. They take advantage of me. This is the streets; residents of it have no heart. I have to sleep on the wheelchair every night because I fear that they will steal it. All I wish for is a place to stay and an ID book. My mother is mentally sick and an alcoholic. Last year I went to her house and she kicked me out, as sick as I was. I am begging because I literally have no choice and it wrenches my heart to see passers by looking at me with disgust. I canâ€™t even remember what happiness feels like. Haroon Dorkin, 58, beggar
I was a quality controller at a company called Pinetex and was retrenched 18 months ago. I tried looking for other jobs but I couldnâ€™t find any. I sleep at a shelter which requires me to pay every day. Now I canâ€™t just sit and do nothing during the day because when the night arrives, I will have to find a place in which to sleep. Sometimes my brother pays my rent but I canâ€™t depend solely on him.

It is very hard to live in the streets, sometimes the police will come here and arrest you, they demand R50 bail and you will find that I donâ€™t even have that. Sometimes I only go home with R20 and on a good day, it will be around R100. One day I left with R300 after a single driver had given me R200, I didnâ€™t know how to say thank you. I am now waiting to turn 60 so I can get my pension and go away from the streets. Itâ€™s very hard to stand here and beg for money. Nothing is guaranteed. Fred Van Gund, 58, homeless
I used to be in the army. In 1984 I was shot twice in my leg and once in the hip. We were at a war in Angola; it was a bush battle between South Africa and the “terrorists”. I healed from the shooting and went back to serve in the army until retiring in 2008. Without [my] knowledge, I was developing cancer because of the shooting and only discovered this in 2005. In 2013 I was told I had to be amputated or I would die. The hardest thing about being disabled and homeless is that sometimes you have to ask for help from people. Besides that I hate asking for help, the streets are not a place in which you can rely on people for things.

I get a grant and I am able to afford living in the shelter but the shelter is only open to me during the night. During the day, I just wander around the beach. After I retired from the army, I became a manager at one of the shelters here in Durban but the owners defrauded me of my money when I was in hospital and I got broke. I have two sons – one is a civil engineer in Australia and the other is a doctor in Canada. I last saw them when I was in hospital. They both have their families to take care of and I donâ€™t want to bother them by asking for anything. Fano â€œTracy Chapmanâ€ Nxumalo, 59, beggar
I live in Clermont with my son. I was in prison from 1978 to 1984, I do not want to say what the charges were but there were three of them. My other son was killed last year in a mob justice attack; he had been a nyaope addict. They took him right in front of me to beat him to death, I didnâ€™t cry much because he had been a stress even to me. I have never worked before, I have been begging here in the street since 1992. I do it because itâ€™s better than crime.

I was born in the most rural parts of Nongoma and I never went to school, my parents never emphasised it and I would just herd cattle. In jail, I became a member of the 26 gang. I have tried to change my life since getting out of jail but some of the habits are very hard to lose. Even now I sometimes gamble by shuffling cards and throwing dice; sometimes I am able to win so much that I donâ€™t come begging for a few days. My life has become a mess and I blame my parents because as a child there was no way I could have known that school was important. I spent the best years of my life in jail and when I came out I was too old and poor to do anything, so I just come here to beg. Sometimes drivers treat you inhumanely but I understand them because they donâ€™t know. I am just going to wait one more year for pension then I can get off the street. Fikile Ndlovu, 55, beggar/hawker
I worked as a maid for 15 years until my employer left for the United States. I was left unemployed and had to start afresh. I looked for a job, I got one but the lady accused me of stealing and I quit right then. Home is in Zululand; I came to Durban in order to get job opportunities but now I am stranded here. It is even hard to go back home, I canâ€™t go there to just sit and do nothing. My mother back home is struggling and I want to find a job so I can at least take care of her. I have two sons, one does piece jobs but the other one is a nyaope addict here in Durban.

I donâ€™t like begging for money, to get a job would be a blessing for me. I have an RDP house that I applied for in KwaMashu but living in it would mean that I have no food to eat, no furniture and no money to buy other necessities. Living in the streets is hard because it devalues you; people sometimes will give you ten cents which is a clear indicator of what they think of you. Honestly, what can you do with ten cents? Once a month I sell clothes that had been left over from the flea markets. I beg for them, wash them and then sell them. Johan Van Der Merwe, 48, homeless
I am a qualified millwright; I used to work at Sasol as an artisan. Many years ago I was diagnosed with gangrene, and in 2006 I had to be amputated. I lost my job, house, and car as a result. For two years, I lived in a care center in Johannesburg called Angel Wings and in 2008 I moved to Durban. I now sleep in a shelter that opens from 5pm to 7am, after that you have to see where you go. I use this time to sell the necklaces that I make myself. I donâ€™t necessarily sell these necklaces for money, itâ€™s just to pass time during the day until the shelter opens again.

I have been looking for a job for a very long time and have even given up. One time I found a job where I would watch the security camera. My boss liked me and I liked the job but after a short while we realised that the building and the work equipment were not user-friendly for my situation; he couldnâ€™t renovate the place just for me so I had to let the job go. There are a whole lot of other people who have wanted to give me a job but find that itâ€™s very hard for a person in a wheelchair. This issue of mobility is serious and underrated because even in any typical shop, you will find that it is not designed for disabled people. I am old now and I am in desperate need for a stable place to stay, this is no way to be in your final years of life.