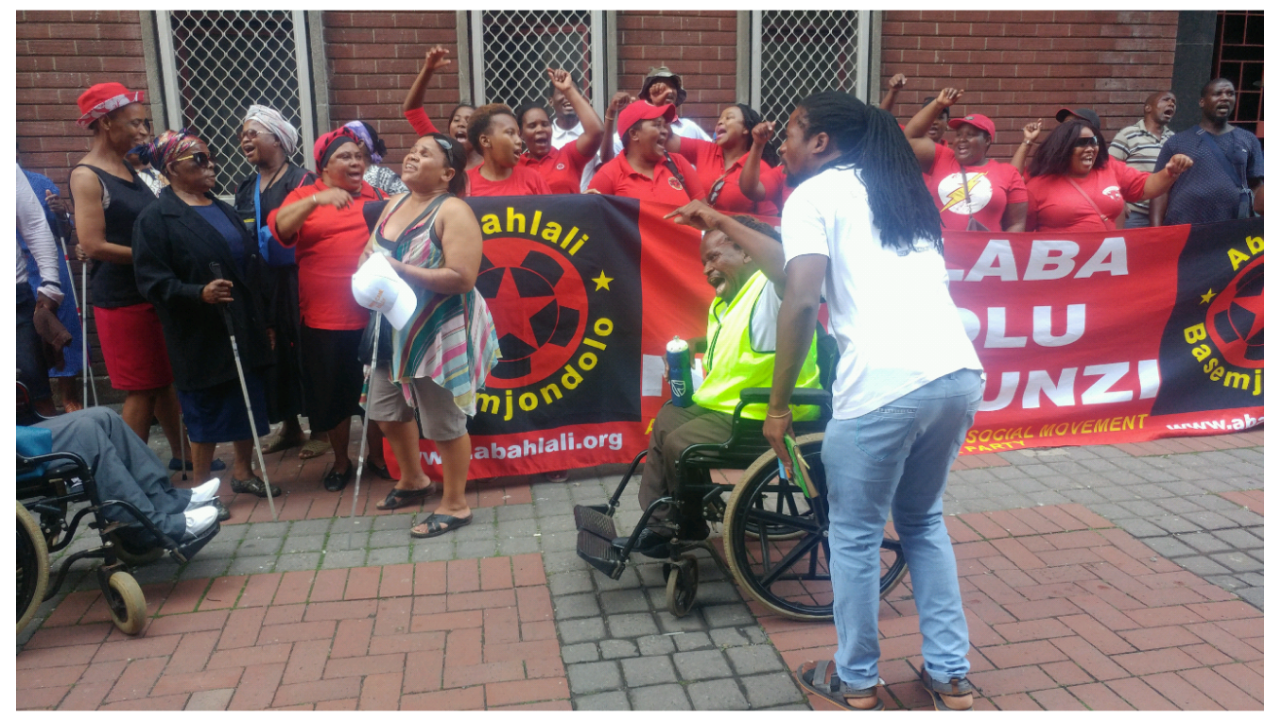 “All we want is to remain at the centre, work and get our money. Our families are hungry,” visually impaired Evelyn Gumede told the Daily Vox.

Last week, Abahlali baseMjondolo filed an application with the High Court in Durban against the department of social development and eThekwini Municipality to reconnect electricity for beneficiaries of Enduduzweni Centre for the Disabled. This, after an alleged power cut by the municipality and the department, in an alleged attempt to evict occupants.

The centre is a home to more than 30 disabled people, whom others of them live with their families. In 2017 the department attempted to close down the place. This after public works released a report condemning the facility saying it was not in a good condition for human occupation especially people with disabilities.

Gumede (65) has lived in the centre for over 20 years, which has been used as a skills training centre for for people living with disabilities, especially those visually impaired. The eviction letters handed out to the residents has left them in a predicament.

“We are elderly people who have families to feed and nowhere else to go. The way they have treated us is unfair in many ways. They first started by cutting our pension money and suggested stipends, which they have also stopped paying.”

“We have needs but they are not considering all that. I have a grandson who goes to school, but now that I don’t have any money I can’t pay for his transport,” she said.

“The department with the municipality have victimised the people. They started by trying to evict them but when that failed, they started intimidating. They would bring in paperwork for people to sign, knowing that they are blind.”

“When people realised what the department was trying to do they started defying them but the department didn’t stop. They went as far as taking them to court, that’s why we are here today,” he said.

These beneficiaries say since 2017 the intimidation they have endured continues.

“We have been without electricity for days now and have been forced to cook using fire. It’s a sad situation,” Gumede said.

The municipality’s spokesperson Msawakhe Mayisela said the municipality was ordered by the department to disconnect the electricity.

“The building is owned by the department of social development and they instructed the municipality to disconnect and remove meters because the building is condemned and poses health risk to people,” Mayisela said.

Thabiso Mbhense, a Legal Resources Centre attorney representing the occupants, said people of Enduduzweni had numerous grievances since the application for eviction was made by the department.

“People have stayed at the centre for years now but after the report by public works, department of social development made an application to evict them.”

“We opposed it because people even work there. What has happened now is that last week, they cut the power, that’s when we decided to file a court application forcing DSD and the municipality to being back electricity. We will also be filing an application for them to give back the people their stipends,” he said.

However, the spokesperson for the KZN social development department Ncumisa Ndelu has rubbished the claims.

“The centre is a skills facility that people have to leave once they have completed their training, but the people have refused to leave although the facility was condemned by public works. They have no ownership of the building.”

“Also, the stipend they were getting was for the hand-work they did, now that they don’t work the department has ruled that they need to apply for social grant, which most of them are now eligible for,” she said.