Home Human Dignity “I can’t do anything to protect myself”: Homeless women on dangers from...
WhatsApp
Facebook
Twitter
Email
Print 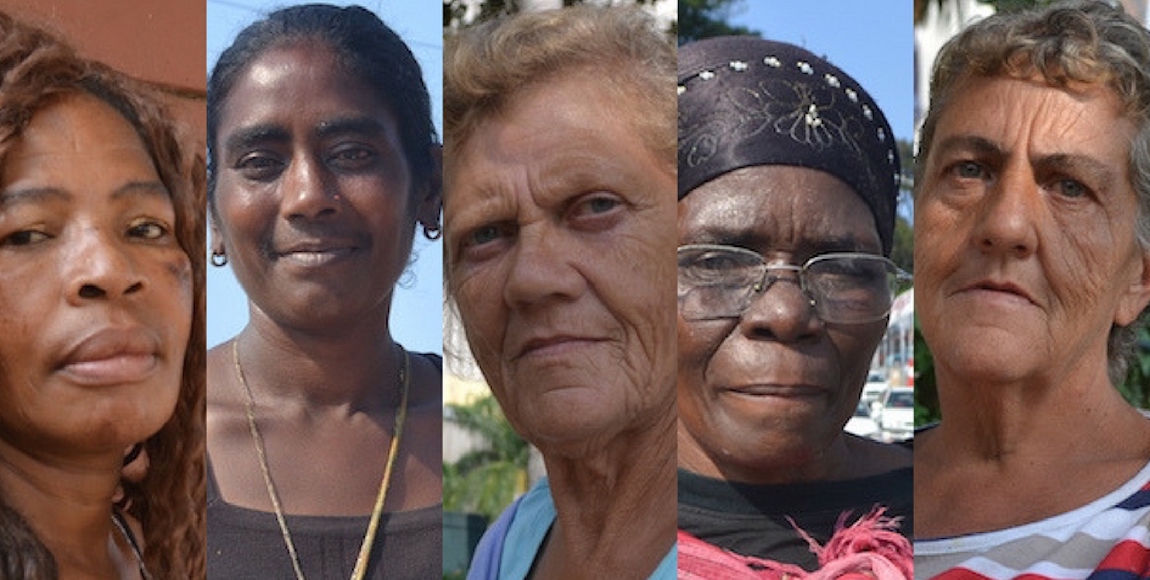 Homeless women and women who live in shelters are among societyâ€™s most vulnerable. They have no walls to protect them from violence, fists, or unwanted glances, but they do what they can to survive on the streets. The Daily Vox asked some women who spend most of their day on Durbanâ€™s streets whether they feel safe. Joanne Posthumus, 57, Durban central
I spend the whole time outside here. You sit here and hope that everyone will look after you – the men and everyone. Sometimes I feel like there is danger, sometimes here there are people who use drugs and everything, and then itâ€™s dangerous. Iâ€™m afraid of rape.

When there is money, I live at the shelter. When there is no money, we sleep outside. We feel safe because thereâ€™s always someone whoâ€™s looking after you, maybe that person sits next to you, maybe it’s the police. I would never sleep alone. Iâ€™m definitely afraid of the men, because you canâ€™t trust a man today.

According to a 2016 survey by the Human Sciences Research Council (HSRC), there are almost 4 000 homeless people living in the central Durban area, most of them male. About half of the homeless people in the city live on the street; the other half live in shelters.Â Trisha Pillay, 31, North Beach
Iâ€™ve been living in the shelter for one and a half years now. I sometimes feel like Iâ€™m in danger when Iâ€™m out here till late, like if we donâ€™t make shelter money and then I have to be out here till late, it depends how the day is. Itâ€™s so risky out here, you know how things happen in this world, you canâ€™t trust anybody. So while Iâ€™m out here, I’m thinking about if I have some little money on me, when we’re walking and going down to the area where we stay. The area where we stay is dangerous too. You know how today the guys have gotten. There are boys there and they hang around till late. They rob anyone as long as they know that you have little cash on you, they wanna attack you and take the money. So sometimes it is dangerous out here.

Sometimes they [men] just want to interfere with women, touch them where they want to. Iâ€™m afraid of this happening to me. I canâ€™t do anything to protect myself, I just avoid being around men. If I see guys around I donâ€™t go near them, I donâ€™t even speak to them. I just stay away from them, I would rather just walk past them or something.

The HSRC says most of the homeless people in Durban came to the city in search of work but were unable to find any.Â Most people living in shelters or on the streets of Durban are young, aged between 19 and 34. Kayroon Melak, 60, Durban CBD
Iâ€™m there [in the shelter] for about ten years now. It is very very dangerous, not sometimes, every day itâ€™s dangerous. The guys are smoking whoonga and taking alcohol, we have to pass them to get into our building.

Iâ€™m scared to walk alone, I have to be with my husband. We try and avoid going towards them. We walk on the sides where there are hardly any guys. When we see a lot of guys, we donâ€™t go towards that place. I trust God, Heâ€™s the only provider.

About 60% of people living on the street and 50% of those living in shelters reported frequent drug use. Joan, 63, Durban Central
Iâ€™ve been living here now nearly four months. I donâ€™t feel vulnerable on the street [as a woman] because thereâ€™s always people; they know you here and they have an eye on you, and at night too.

Iâ€™m not always with someone. Sometimes, but not always. Iâ€™m by myself. On weekends, when people come from the clubs, theyâ€™re drunk and using drugs and that, then they canâ€™t leave you alone. They want to rob me, like take my crutches and stuff like that. There are times when Iâ€™m afraid of men, I donâ€™t want to be involved with men. I like to be by myself. There were a lot of men [who bothered me] but they donâ€™t try anything, Iâ€™m always around security to protect myself. I just chase them away from me, or I walk away from them.

Seven percent of people living in Durban’s homeless shelters are pensioners; 14% are aged between 45 and 59 . I stand at the robots to get coins for bus fare to go home sometimes. I spend most of my time here and I am not safe. My daughter used to work at Cambridge but she lost her job. When I make enough money I go home, otherwise I have to stay here. I have to take care of my grandson too, but if the cops come they donâ€™t care and chase me away. No one else really troubles me because I am old. I live in a jondol (informal settlement) for 20 years. I am a domestic worker but only for two days a week. When I am not at work I collect cardboard, some people donâ€™t like that but others donâ€™t mind. I cannot be out late because I am afraid of some skotten [tsotsis]. I have to rely on God. My daughters have to come home early after school so they are not out late. I also have to go home before it is dark, and when I come home late I have to walk with someone. Anyone can come in and break the door, we live in fear.

Nearly half of those surveyed by the HSRC were jobless. A few reported having secure employment. Many said they had piece jobs, like gardening or guarding cars, or that they begged or â€œhustledâ€.

Read more about the HSRC report “Ikhaya Lami: Understanding homelessness in Durban” and get the full report here.