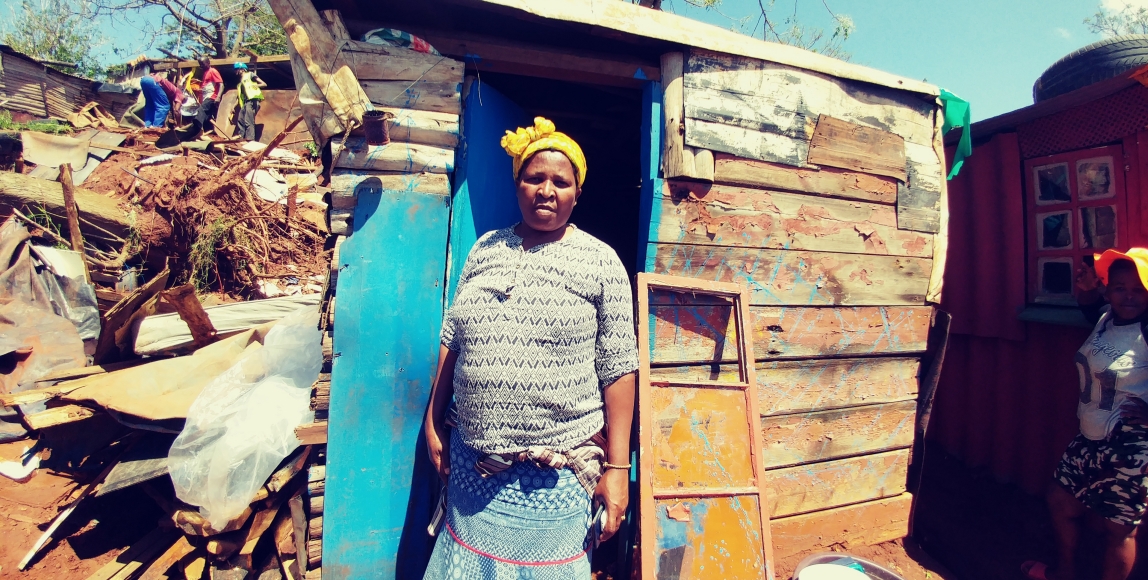 Fallen trees, washed away roads and flooded pavements are not all that the people of Durban have had to endure in the aftermath of last weekâ€™s storm. Many were left homeless, with no shelter or guarantee of safety. A few kilometres from Isipingo lies the Uganda informal settlement, a poverty-stricken area that is home to about 150 families, there is manifests fear and desperation, as people cast about for material to rebuild their homes and food to feed their children.

When The Daily Vox visited the settlement on Wednesday, children were playing around and adults were trying desperately to mend their homes so that they could have shelter when night fell. Many slept in the open on Tuesday night after their shacks were razed by gusts of winds and rain.

â€œWe’ve been trying to restore our homes but it’s not easy. The damage seems to be beyond our control,â€ says Nophumo Mahanjana, 36, pointing at the scraps of debris left from what used to be her home. All that remains in the yards of her neighbours are poles and shreds of metal sheeting. Mattresses and blankets hang loosely on the trees to dry.

The fatal Durban storm reached a confirmed death toll of eight. Some who went missing have still not been found. Roads were washed away and large trees had fallen, wrecking people’s houses and cars. In Uganda settlement, about 75 families were displaced when the storm hit the area.

Sunil Brijmohan, a ward councillor says, â€œthe city is working hard to help those who were displaced. The mayor came to see the situation, people were given mattresses, blankets and food parcelsâ€.

However, days later, the displaced were still without shelter and had to rely on neighbours to let them sleep in their houses. Brijmohan said that they were still waiting for the Disaster Management Unit to hand over material for the displaced to rebuild their structures.

More than 133 schools were confirmed affected. Itâ€™s estimated the city will need R136-million to repair the damage. Several hospitals were also affected. One life was lost when a wall collapsed in Prince Mshiyeni Hospital. On Thursday Premier Willies Mchunu declared the province a disaster zone.

In Uganda, as in many informal settlements in South Africa, the living conditions are appalling. When storms hit the city, shackdwellers are more prone to suffering than anyone else, as their houses are made of refuse material. Illegally connected wires hover visibly above shanty homes.

People’s belongings were scattered all over the ground, including their clothing, furniture and mattresses. The shacks that had survived being washed away were flooded with water. In between houses lay trash, mud and bare wires.

Although the children of Uganda seem jolly (they don’t really understand the dire situation their community is in), the adults are in a mode of devastation. They still remember how they voted for a councillor who they thought would bring them a better life.

Like many poor South Africans, the future of the people of Uganda settlement is bleak. Most people here are unemployed, making it almost impossible for them to even rebuild their shacks. Izinyokanyoka (illegal electrical connections) are their only source of light and warmth.

The wait
Sibusiso Ntanzi, 33, has lived in this settlement for over a decade. He says they were promised houses years ago but the wait is nowhere in sight. â€œWhen we demand houses, we are constantly told to wait but it has been 11 years already,â€ he says.

There’s currently a dire shortage of housing in Durban. The province of KwaZulu-Natal bears a 650 000 unit housing backlog. The eThekwini Municipality has accumulated a series of uncompleted housing projects. According to the department of human settlements, the municipality alone carries a total of 400 000 unit backlog.

For the residents of Uganda, broken promises and hopelessness are all government has to offer. Councillors come and go but the communityâ€™s living circumstances never change. After 10 years, residents still live in cramped informal housing, squeezed close together into a narrow strip of land. Despite the great strides made in increasing access to social grants, with high unemployment, people continue to languish in poverty.

But Uganda is just one in a long list of Durbanâ€™s forgotten communities. While political bigshots canvas for votes ahead of the 2019 elections, social injustice and the cycle of poverty remain rife in South Africaâ€™s informal settlements.