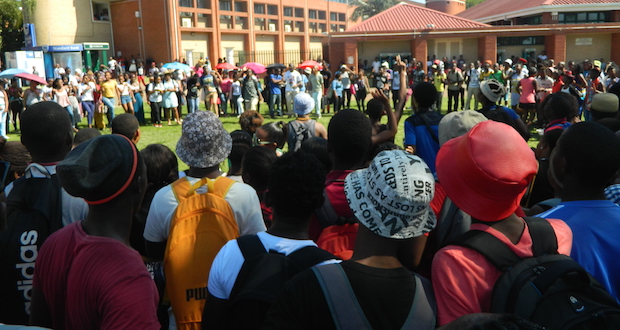 Tensions are simmering at the Durban University of Technology (DUT) with ongoing student protests over financial aid. QINISO MBILI was on the ground to find out more.Â

On Tuesday, both registered and unregistered students marched from ML Sultan campus to Steve Biko campus to protest the administration of the National Students Financial Aid Scheme (NSFAS).

â€œUnequal education is no education at all,â€ Mqondisi Duma, said secretary of the Studentsâ€™ Representative Council, told students who had gathered at the Steve Biko campus. â€œEvery student deserves an equal opportunity.â€

The strike follows a series of discussions between the SRC, DUT management and NSFAS over the funding of needy students.

Some of the demands made in the SRCâ€™s memorandum included that:

The SRC also demanded that the university deregister all Jewish students in support of Palestine.

Asked to comment on this, the office of the vice chancellor, Ahmad Bawa, â€œrejected [the demand] in the strongest possible mannerâ€.

Registration at the university opened in mid-January, but thousands of prospective and returning students are still unregistered due to issues concerning financial aid. The unrest was triggered by claims that unregistered students would soon be stopped from attending classes.

â€œI fully support the right of students to engage in peaceful protest,â€ stated Bawa in a statement issued almost two weeks ago in light of growing rumours that there would be a strike at the university. â€œI must, however, emphasise that protest, has at all times to be peaceful.â€

In the statement issued earlier, Bawa threatened to take strong action against students who embarked on any form of violent action.

Speaking to protestors on Tuesday, Sasco president Zola Mzimela said: â€œWe must fight in order to stay inside the university because conditions are even worse outside university.â€

There was a heavy police and security presence on the Steve Biko campus, with officers carrying paintball guns and rubber bullets.

The protesters threatened students who did not partake in the march by shouting and pointing at them. Although students that desisted from the strike were explicitly threatened and told to either join the strike or go home, no violent incidents occurred. All cafeterias at the food court were closed.

â€œWe will keep the lines of communication open and the vice chancellor is prepared to engage with the SRC,â€ Bawa said in an email to The Daily Vox.

The university would continue to work with the SRC and the National Student Financial Aid Scheme in trying to assist as many students as possible in the financial aid process, he said.