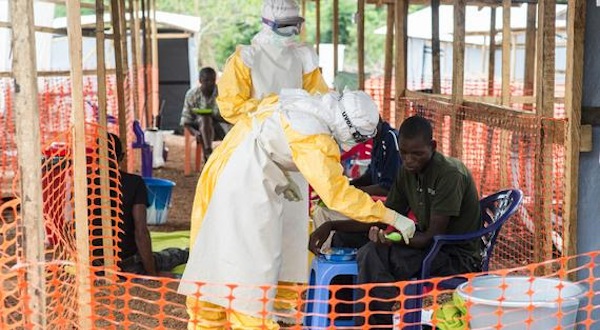 The Daily VoxÂ is running a series of blogs written by DR STEFAN KRUGER, who is in Sierra Leone with Doctors Without Borders (MSF)Â to help combat the spread of Ebola in the region.

With training done, all boxes checked and the green light given, I enter the isolation unit for the first time. My first patient is a nurse from a nearby clinic. He has been seeing many patients, some suspected to have Ebola. He has now fallen ill himself. We collect his blood sample for testing. This is quite a process as well. The sample container is decontaminated with chlorine, it is placed in a plastic bag which again is decontaminated and upon our exit is placed in another bag and decontaminated again. The laboratory will do a highly specialised test, called a Polymerase Chain Reaction, and before lunchtime we will know his result. I pray it will be negative, but he looks quite poorly. Part of the problem with defining the disease is that Lassa fever is endemic in this area. Many healthcare workers have substantial immunity against it as they have previously survived it. The symptoms of Lassa fever and Ebola (and Malaria for that matter) are indistinguishable in the early stages. I wonder how many of these unsuspecting nurses, with the best intentions in the world, have treated suspected Lassa fever cases without realising that it was in fact Ebola.

Doctors without Borders (MSF) is currently working in Sierra Leone, Guinea and Liberia to combat the spread of Ebola across the region. To support this work, go toÂ http://msf.org.za/donateÂ or SMS â€œJOINâ€ to 42110 to donate R30.Â To receive direct updates about Ebola from Doctors without Borders (MSF) SA, e-mail your name toÂ updates@msf.org.zaÂ with theÂ subject line â€œEbolaâ€.