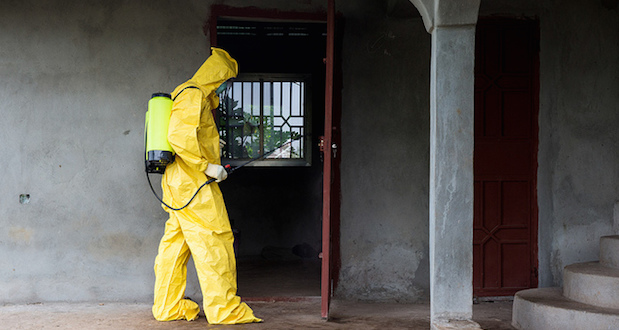 A year ago, an Ebola epidemic broke out in Guinea and spread to Liberia and Sierra Leone, showing the world the havoc a single virus could cause.

Now, though the United Nations is hopeful that Ebola will be eradicated at the end of August 2015, the virus is still casting fear and doubt in the West Africans it has affected.

Less than 12 months ago, the rapid spread of Ebola, and its high fatality rate, had the world scrambling in fear. People were dying so quickly that the World Health Organisation is still tallying the dead. (The figure currently lies at more than 10,000.)

Although the situation has calmed since last year, a new video released by the aid organisation, Doctors Without Borders (MSF), demonstrates the lingering fear medical workers have, particularly now, as the case numbers begin to recede, and people begin to relax.

The video brings back the panic the virus mobilised, showing the sprawling medical camps where patients lie in sterile, white tents.

â€œWe are facing the biggest [Ebola] epidemic weâ€™ve ever seen by its geographical spread,â€ Michel van Herp, an epidemiologist with MSF, says in video footage captured in 2014.

Even medical workers in protective suits were not safe from the virus â€“ just two weeks ago, yet another healthcare worker tested positive for the disease.

At one point, there were just 60 medical workers fighting the outbreak which had gripped Liberiaâ€™s population in fear and, so far, killed more than 4,200 Liberians. Despite the training of additional volunteers in the safe handling of the disease, the drop in case numbers, and a clinical trial being introduced in January 2015, MSF has warned that the disease has not yet been beaten.

â€œThis is the most dangerous moment and the most critical moment in an outbreak,â€ said Ivan Quentin, a water and sanitation expert.