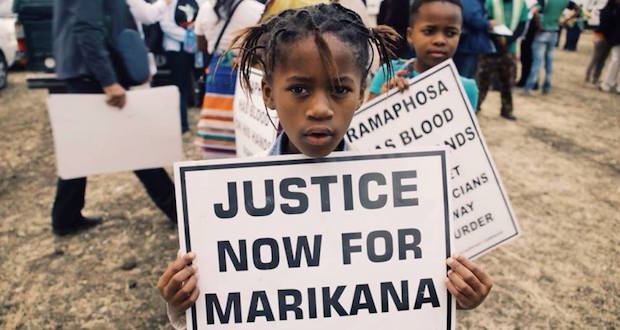 The Marikana report by the Farlam Commission released by President Jacob Zuma on Thursday night was a farce. Instead of addressing the reasons for the Marikana massacre and advancing a programme of reconciliation and justice, the report offered vague recommendations, and provided no closure to victims or their families.

Almost three years after post-apartheid South Africa’s biggest and most brutal incident, the report recommended there be more investigations, more inquiries. But South Africans aren’t fooled by the findings; a massive coverup has taken place here. The massacre at Marikana should never have happened, and the report admits as much. But that is the easy part – the report stops short of pinning blame and providing justice.

Here is what the report should have said:

1. Now deputy president and former Lonmin board member Cyril Ramaphosa didn’t pull the trigger, but that doesn’t mean he didn’t contribute to the rising tension at the mine. Ramaphosa had material ties to the mine and intervened; he must bear responsibility in not contributing positively to the wage negotiations and ought to resign as vice president of South Africa immediately. How will he govern a nation if he can’t intervene during a strike?

2. The police had no business using live ammunition; the response was heavy handed and brutal. National police commissioner Riah Phiyega and the SAPS’ North West police commissioner, lieutenant-general Zukiswa Mbobo, who authorised the plan for the day’s operation should be prosecuted immediately.

3. The police officers who opened fire should face disciplinary procedures, given counselling, and if they are exonerated, given a second chance to do their jobs. They earn a pittance and are pawns in a larger fight between politicians, capital and labour. This was not their fight.

4. For failing to negotiate properly and allowing the situation to spiral out of control, Lonmin and the South African government must compensate the families of those killed and injured, beyond the piece-meal assistance they have offered so far.

5. The violence demonstrated by police at Marikana falls in line with a culture of police brutality that has played out over the past decade. Marikana showed that police services are overburdened and are at the front end of a system that is not working. It is the police who are tasked with containing an irrepressible anger among the poor and disenfrenchised. To this end, we need immediate reform of the police sector including salaries, training and motivation and we need to reconsider our economic priorities.

6. The question of land is central to the Marikana massacre. With the rural economy shrinking, the demands on workers in urban areas and in the mines are bigger than ever. Without addressing land ownership, this commission would be incomplete.

7.The report ignores the fundamental causes of the strike, saying labour disputes were the sole reason for the tragic events. But context matters. The miners live in shacks made from corrugated iron, cardboard and scrap material. Electricity can be obtained only underhandedly, water pipes have been dry since 2013, and, for some, toilets are a luxury.

The report recommended that Lonmin build better houses, but will the mining company listen? Justice is more than financial compensation – it is bettering the lives of the families by respecting their right to live in proper conditions.