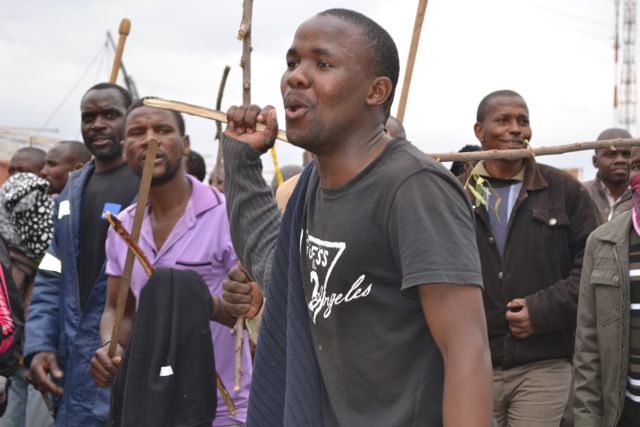 It’s all about land, it seems. All the strife and troubles from sixteen-forty-whenever, when good old Jan van Riebeeck (after whom a school is still named in the Cape Town CBD) stole the land. As commercial mining continued after 1994, nothing had changed. Albeit this time, the land grabbing was not as legally clear and condoned as it was then.

After spending a few weeks at a time in the North West Province, conducting research on mining and land grabbing along South Africa’s platinum belt, I understand the love for the Economic Freedom Fighters (EFF), their stalwart Julius Malema, and the red beret. Because the red beret understands that everything, everything, is about land.

56-year-old Anna Tshabalala lost her family’s land a few years ago, when Anglo Platinum came in and started constructing a mine on which she and her parents and grandparents used to farm and keep their cattle. Anna needs to find a new means of income now. She goes to Rustenburg to look for a cleaning job and earns a pittance. She has to spend it on food, which she used to be able to grow in her backyard. Her four children, aged seven to 21, no longer have their mother home when they come home from school. Her role in society has changed.

She does not have title deeds to her small plot. This western concept was not necessary under communal land practices. Even though there is some protection for Anna and others in her situation under the Interim protection of informal land rights act of 2004, this is overridden by the Mineral and Petroleum Resources Development Act .

Karabo Makenna, who lives in the nearby village of Photsaneng, has two options. A platinum mine is expanding; the operations are now less than a kilometre from his house. He can stay, but will then face blasting noises in the middle of the night, and his walls will crack. He wont be able to use his borehole or grow anything in his garden, because the soil will be contaminated by acid mine drainage seeping out from the mine.

If he accepts an offer to be relocated, if there is one at all, he will likely be moved to an area where the land is not arable, and he will have lost the thousands’of rands he had spent on digging his borehole, and the decades of adding levels to his house as his family grew. He will have a two-bedroom house for his family of six.

The EFF sees this and provides a reassuring hug. They talk about it, nay, shout about it. It doesnâ€™t matter that Malema has stolen public money, or that he used it to buy a Sandton monstrosity. â€œIs it?â€ was the locals’ response to my enquiry about why they would still vote for him. Then they carried on walking.

Malema should not be in power. The EFF should never be in power. But they need to be somewhere pretty high. God forbid they are given free reign over land restitution. But this is an issue that needs to be out on the table in parliament on a level far beyond the joke status that it currently has.

I have my red beret. But I wear it backwards for now.

Ilham Rawoot is a freelance journalist, based in Cape Town. She writes for Al Jazeera, the City Press, Mail and Guardian and Dazed and Confused.