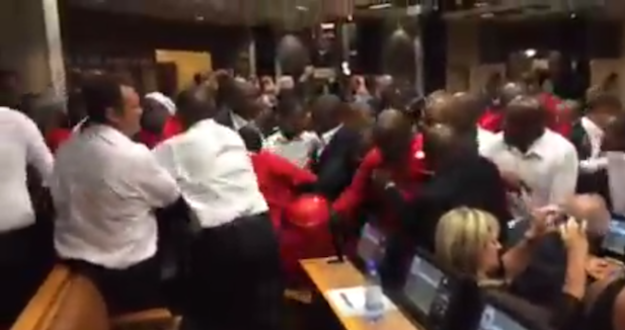 Members of the Economic Freedom Fighters (EFF) were forcibly removed from Parliament after they disrupted the State of the Nation Address (Sona) to ask President Jacob Zuma to #paybackthemoney used to upgrade his personal home in Nkandla, KwaZulu-Natal.

The parliamentary feed from inside the National Assembly was firmly focused on the Speaker for the House, Baleka Mbete, during the entire incident, but video shot on mobile devices soon leaked onto the internet.

Mbete did not reference any specific Parliamentary rules when ordering that EFF MPs be removed from the House.

According to EFF leader Julius Malema, seven EFF MPs were injured in the scuffle.

The opposition DA staged a walk-out after demanding to know whether the security officials who had removed the EFF were part of the parliamentary security detail or members of the South African Police Service.

Zuma continued his speech an hour after he was scheduled to deliver it.

Watch the video of the crucial moments of the EFF removal saga:

Or, if youâ€™re willing to spend more of your time, this video offers extended footage of what went down in the House.