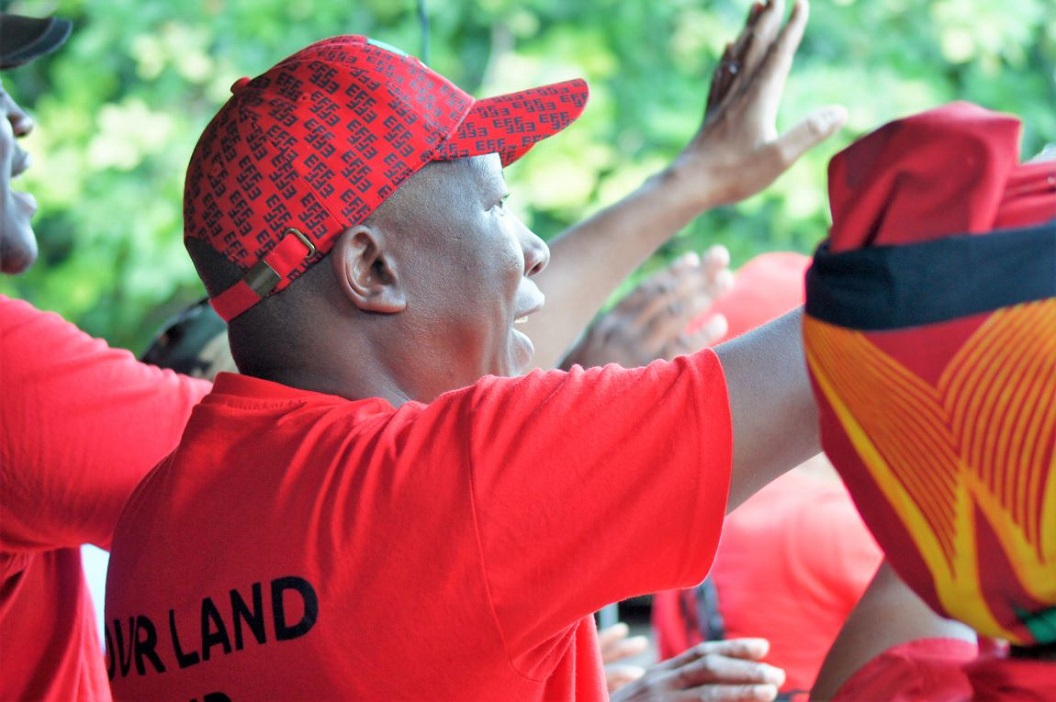 “May 8 is not a voting day – it’s an economic freedom day, ” said Economic Freedom Fighters leader Julius Malema. It was a sombre Malema who addressed supporters at the Orlando Stadium saying: “Political freedom without economic freedom is meaningless.” The stadium was red as fighters filled up the statement for the Tshela Thupa Final Rally.

“We are here today because of your hard work,” said Malema of the ground forces gathered at the statement. He said he was happy to be at the stadium despite losing his grandmother.

“My grandmother would have wanted me to be here. She left me in the good hands of the ground forces of the EFF,” said Malema. He thanked the EFF ground forces, South Africa political parties and South Africans for their messages of support and condolences.

Malem said: “My grandmother meant everything to me. I am because of her […] She stood by me and always believed in my innocence when the detractors accused of all things.”

Malema used his final speech to commend the work that the ground forces of the party did in garnering support for the party. He said they have shaken the African National Congress (ANC) and Democratic Alliance (DA) around the country. “You are amazing ground forces of the EFF. We are proud of you fighters. You run a beautiful, dignified, and decent campaign,” he said.

“We are everywhere,” said Malema.

He aimed strong criticism at their critics who thought the party would not even survive one year. “They thought we were a Mickey Mouse organisation. Now you can’t talk about the future of the EFF without the EFF. We are the future of South Africa,” he said.

Malema said he was happy to see so many grandmothers at the rally. He added this was in direct contrast to past years where there were no grandmothers at EFF events. He said this was a sign that old people are realising that Nelson Mandela is gone.

“Mandela has handed over the baton to the younger generation which is in the EFF,” Malema said.

Malema went to great lengths to speak to people around South Africa reminding of the failures of the ANC government. From Alexandra to Tskane and various other townships around the country, Malema addressed them saying they know the problems they have. He called on them to vote to restore to dignity of the children of Africa.

“Let us vote for the hope of the hopeless messes,” said Malema.

He extended the call to include people with disabilities, teachers and policemen, amongst saying the EFF is the party to help them all.

Malema said the EFF will restore the dignity of the police service. He encouraged the police to stop going after the innocent people. Instead he said they should be going after the corrupt ANC politicians like Ace Magashule, Jacob Zuma, Cyril Ramaphosa amongst others.

“Women will own more than 50% of the land under the EFF,” said Malema adding that women will be in charge. “Women must lead us from the front. They have been better leaders. If you say you can’t be led by women, then you are saying you can’t be led by Winnie Mandela,” he said.

Malema called out the double standards that women face. “Economic freedom without emancipation of women means nothing,” he said.

Malema said they are not trying to exclude white people from South Africa and the economy. Instead, he said they are fighting against the white privilege.

“We are fighting on the dinner table. No one is going to eat until everyone in South Africa eats from the same dinner table,” said Malema.

He said once black people get the land, they must work the land. “Black people are not lazy. Stop making people laugh at black people,” he said.

Malema encouraged everyone to vote. He said that by not voting you are giving a vote to the ANC. He said everyone said saying they are not voting are ANC supporters who are not happy with the party.

“EFF is made by the squatter camps, the townships, the domestic workers, the farm workers, the security guards and all those are oppressed by the current government, not by the media,” said Malema.

“The red flag is going to fly over the Union Buildings after May 8,” said Malema urging all ground forces to be present during the voting at all voting stations.

With his voice cracking Malema ended his speech saying that victory is certain for the EFF. “Let the red flag fly high.” he said.