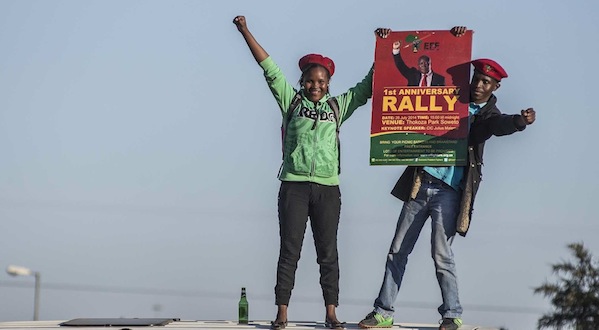 IHSAAN HAFFEJEE attended a rally to commemorate the first anniversary of the Economic Freedom Fighters (EFF).

Itâ€™s been a year since Julius Malema and other disgruntled former ANC Youth League members took a decision to form the EFF, and on Saturday thousands of â€œfightersâ€ gathered at Thokoza Park in Soweto to celebrate the partyâ€™s first anniversary.

People waited in long lines to get into the venue, where they were presented with a signature red EFF t-shirt, a music CD featuring EFF praise songs and a braai pack containing boerewors, chicken and a piece of steak.

A fancy stage and an even fancier VIP section had some journalists questioning the source of EFFâ€™s funding for such an event. (The Russians maybe, the South Americanâ€™s possibly, definitely not the Israeliâ€™s because Malema just informed us that thatâ€™s where the DA gets its money from.)

Atop the massive stage flew the Cuban and Palestinian flags. An EFF member tells me this is in solidarity with the countries that supported the struggle against apartheid during the countryâ€™s darkest days and it was now our turn to return the favour.

By 2 oâ€™clock large sections of the mostly youthful crowd were already viciously drunk and I had difficultly finding someone sober enough to have a meaningful discussion with concerning the future of the EFF.

George from Sebokeng, his red beret fastened tightly to his head, an extra large can of Castle gripped in his hand helped me out. â€œIt’s like [if] I just decide to take your cameras away from you Mr Photographer and then later I come to you and ask you to buy them back from me,â€ he tells me.

â€œThis is what they did with our land, itâ€™s not fair and now we want it back, expropriation without compensation, no questions asked.â€

The official program started with the National Anthem, but not the remixed version which we sing at sports events. Here at EFF events, only the original will do – the no English, no Afrikaans version. By the time Malema was introduced, the park was packed to the rafters and there was a drunk man passed out in a tree.

Julius took to the podium with his usual gusto, telling the crowd the ANC is running scared of a one-year old organisation and that the EFF is here to stay, forever. The EFF must assist the people of Palestine, Western Sahara and all oppressed people around the world to obtain their liberation, he said.

Then he encouraged all the people who voted EFF to not pay their SABC TV licences. â€œWe cannot pay TV licence to the SABC just so we can see Gwede Mantashe and Jacob Zuma,â€ he said.

The crowd hung onto his every word and when he closed his speech with a song in the late afternoon the fighters were in a frenzy, ready to enjoy the long night of partying ahead.

I made my way to my car after Malema closed his speech only to find it was not where I had parked it. Stolen, I thought.

â€œNo,â€ said a friend, to whom I related the story later that night. It was expropriated without compensation. EFF members dancing before the start of the program. Not all EFF members are angry youth, some elders also attended. Thousands of EFF members cheer as the leadership of the EFF take to the stage. Commander in Chief Julius Malema takes to the stage. A drunk EFF member lies passed out in a tree as Malema speaks. EFF members enjoy the party from on top of a taxi overlooking the stage.