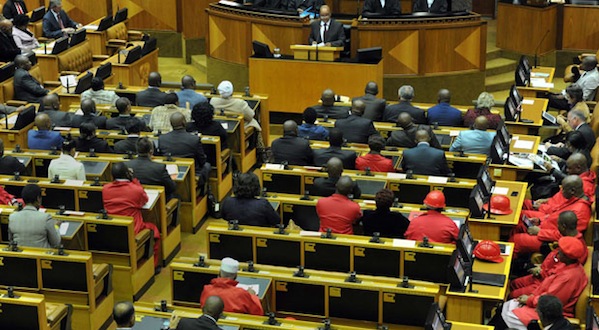 On Tuesday, the EFF walked out of a disciplinary hearing held by Parliament’s powers and privileges committee.Â On 2 August EFF MPs disrupted parliamentary proceedings when theyÂ chantedÂ “Pay back the money!” in reference to Public Protector Thuli Madonselaâ€™s report on the funding of President Jacob Zuma’s private residence at Nkandla. EFF leaderÂ Julius Malema said, â€œThe humiliation the ANC wants to inflict on the EFF knows no bounds.â€ Was the EFF right to walk out on the committee? AAISHA DADI PATEL reports. Mpho Mosia, 23, biologyÂ student, Braamfontein
If they’re being chastised for #PayBackTheMoney, I don’t think they have any faults – they’re asking proper questions. The EFF is known to be radical, it’s expected of them to chant and walk out and do things like that. And in this case I wouldn’t say they’re in the wrong for it, they’re asking for the truth. I think the ANC is purposely trying to humiliate the EFF but it’s expected. They’re trying to cut the EFF out, but it’s not going to happen. Rofhiwa Neluvhalani, 24, mathematician, Bertrams
I think what Julius did was very childish because at the end of the day it was just protocol, you can’t say the ANC were purposely trying to bully the EFF. I’m not sure if Julius and his party know boundaries. There’s a reason why they were called in for this hearing. Obviously we don’t expect the ANC to be friendly to the EFF and there’s nothing wrong with what the ANC did – they should exercise their majority privileges. Karim Sadr, 55, archaeologist, Rosebank
Asking for the money to be paid back in the first place is correct, but whether they should have walked out of Parliament – that’s a political act and a way of sending a signal, and maybe it’s the right signal. All political parties, when in the position to bully a lower party and push an agenda, will do that; so maybe this is what the ANC is doing. It doesn’t sound like they made an unreasonable suggestion, but whether they’re justified in saying it or not – I’m not sure. Ayabulela Mhlahlo, 18, politics student
I like what Julius said – not only was he questioning whether the EFF was out of order, as the Speaker was claiming, but he was questioning the legitimacy of prosecution in Parliament. Our parliamentary structure is very dictatorial and in it’s entirety still colonial. If we are serious as people who want to challenge the status quo or the system, we ought not to fuss over every small thing. And this all leads up to the worker-bourgeois question – the EFF will always be antagonised by the ANC. So even if you look at the EFF with an impartial eye – they were definitely justified in walking out. And the ANC will always humiliate the opposition. That’s politics.