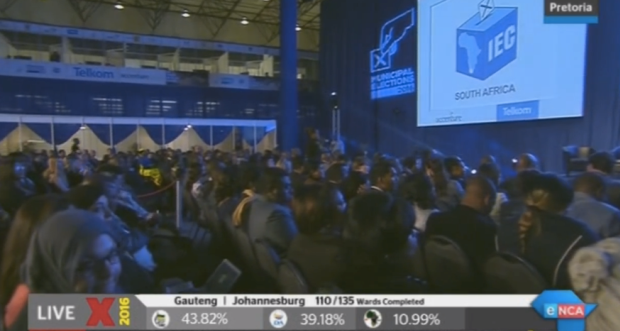 The Independent Electoral Commission has announced results of this year’s local government elections.

Speaking at the IEC operational centre on Saturday, theÂ Glen Mashinini, IEC chairperson said that this was toughest and most contested election since the end of apartheid.

“When we launched the local elections, I said it would be a litmus test for both IEC and South Africa,” Mashinini said.

Mashinini said that they were still collating the data for Johannesburg, which is perhaps what everyone really cares about.

When Jacob Zuma came to the podium to speak, four activists arrived holding up placards “Remember Kwezi” – in reference to the woman who accused Zuma of rape some 10 years ago. The case was dismissed in 2006. Following Zuma’s address, the activists were led away by security.

Earlier, Kate Bapela, spokesperson for the IEC, said on Saturday they were waiting for dignitaries to arrive so that event can start.

IECâ€™s spokesperson Kate Bapela is so calm and composed – as she has been throughout this process. And always acknowledges media.

To watch the results live, see the link below:

Follow our editor @khadijaPatel at the IEC operational centre for live updates as well.