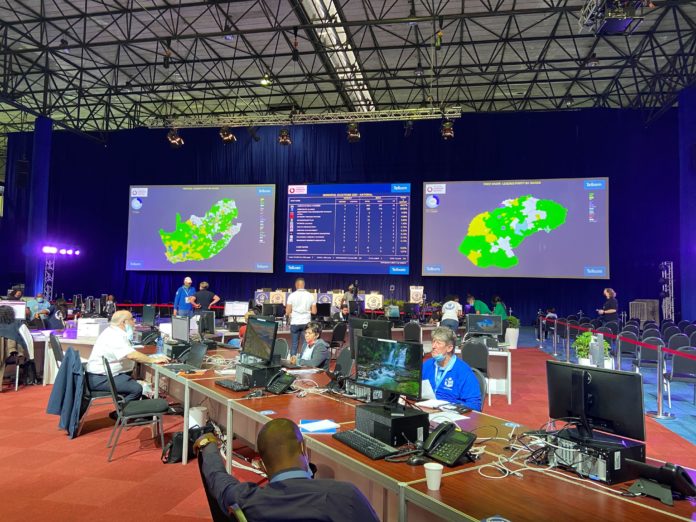 Welcome to The Daily Vox’s live blog. The team will be at the various results centre keeping an eye out on all the results from the 2021 local government elections.

20:17 At 19:30, the Electoral Commission reported that 55% of the 64 502 results expected had been finalised. The Northern Cape has completed 89% of its results, followed by Western Cape at 72% and in third position comes Eastern Cape at 70%. The rest of the provinces completion rate range between 37 and 67%.

18:23 Already the words coalitions, hung councils and majority are being thrown around and it’s probably only going to increase in the next few months. We’ve put together a little explainer on what those words mean.

18:00 Our reporters have left the results centre but will be back tomorrow. It was a particularly hot day in Tshwane and not just because of the spring weather. Earlier today, Eskom announced that loadshedding would be returning. The IEC said they were prepared for this and they seemed to prepare by switching off all the aircons.

17:56 In the Western Cape, there is everything still to count when it comes to the votes. However, the DA are a little concerned about the low voter turnout, especially among young people. Youssef Kanouni from the National Freedom Party said the low voter turnout had many factors. Political parties should take responsibility for not mobilising voters, and especially the youth, he said. He said if he did not encourage his daughter to vote in the elections, she would not have.

14:41 During the run-up to elections, the Daily Vox spoke to Tshiamo Malatji, an independent candidate from Mangaung. Despite not winning the ward, Malatji has told The Daily Vox he is going to continue working to build a better community.

14:38 So far as the results stand, there are seven hung councils. This means that there is no majority. Out of 213 councils, 201 councils are yet to be calculated.

12:04 The IEC has also called on all political parties “to act and speak responsibly”. The DA’s John Steenhuisen has been quoted as saying he has lost trust in the commission.

12:00 Responding to questions from journalists, the Commission said despite the many glitches with the voter management devices, the election would have been impossible with it.

11:59 The Electoral Commission has announced that it is estimated that 90% of the results will be finalised by this evening. The Commision said the remaining 10% will take another 24 hours to complete. Results should be announced on Thursday.

10:58 Our teams will be based at the National Results Centre and the Western Cape Results Centre for the next couple of hours. Votes are coming in slowly but surely at many of the voting stations.

08:03 From midnight, results have been coming in across the country. This is as voting counting and processing takes place. Results at several wards have already come in but there is still much left to be decided.

All the results can be tracked here