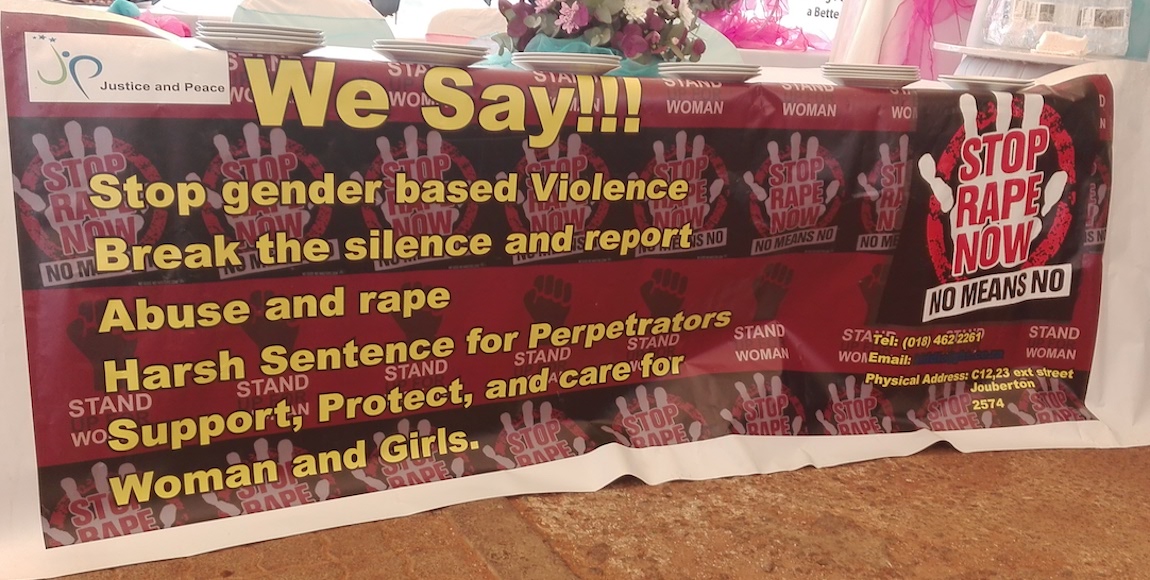 Last week, the Southern African Catholic Bishopsâ€™ Conference (SACBC) and United Nations (UN) Women hosted a community dialogue on how to end gender based violence in taverns and communities at the White Jazz Palace tavern in Jouberton, Klerksdorp. But this dialogue was just more of the same. If we are to end gender based violence, we need to spend less time and energy speaking from podiums and use it instead to hold violent men to account.

A crowd gathered in a tent next to a tavern in Klerksdorp to hear tavern owners and community members’ thoughts on the fight against gender-based violence.

UN representatives and local tavern owners addressed the crowd, with UN Women representative Themba Kalua calling for men and women in society to stand together in the fight against gender-based violence, and saying men should stop viewing women as their subordinates. He said it was important for communities to have more dialogues to discuss solutions collectively. Local tavern owners and department of women representative Ntsiki Sisulu echoed these sentiments and added that community members should drink and spend wisely.

At one point, a woman holding a bottle of Castle Lite who was seated next to me asked what the commotion was about. Before I could explain, she jumped up yelling â€œMy song!â€ when an old pop hit started blaring from the speakers of a Black Label truck. She wasnâ€™t the only one who was there for the party.

Another woman told me she and her friends were just at the tavern to enjoy themselves and that they weren’t paying attention to the speakers. â€œWe just saw a tent in front of the tavern and people under it and we decided to come chill under it,â€ she said.

Almost everyone who danced in and out of the tent over the next five hours was holding a bottle or two of Castle Lite. Some carried six-packs.

Itâ€™s hard to gauge what the event achieved. There have been events like these over the years, events that offer food, drink and entertainment, while officials and NGO-types make speeches from a podium.

Several debates and conversations emerged after the murder of 21-year-old Karabo Mokoena by her former lover Sandile Mantsoe, but it’s unclear whether thereâ€™s been any tangible change in a society where a woman is murdered by her intimate partner every eight hours.

Just this past weekend, the Castle of Good Hope in Cape Town hosted an exhibition and talk on how to end gender based violence in Cape Town communities. But is this not a caJouberton residents who were passing by the White Jazz Palace tavern on Saturday were drawn in by the clamour inside the tent. The programme kicked off with a prayer session, the local pastor competing with the music from the Black Label truck, the truck competing with the music coming from the tavern, the tavern music competing with the sound of dozens of people speaking and laughing loudly in the tent.se of preaching to the converted? Would a man who beats women really volunteer to see an exhibition on violence against women?

Earlier this month, an all-male panel discussion on how to end violence against women came to the same conclusions we always do – we need to relook at how we raise boys, men should take more responsibility and own up to the fact that they are the main perpetrators of gender based violence.

And yet, we live in a country where a high-ranking official like Mduduzi Manana can beat a woman in public and evade censure from the police or the state for days before appearing in court or losing his job.

We must interrogate this generic pattern of hosting dialogues as a way of fighting gender based violence. We can talk among ourselves all we want, but until we start throwing resources behind broad-scale interventions aimed at boys and men, and until we start loudly and publicly rebuking – and jailing – men who enact violence against women, we wonâ€™t achieve anything.

Editors’ note: The first paragraph of this article has been amended as it was found to be inaccurate.