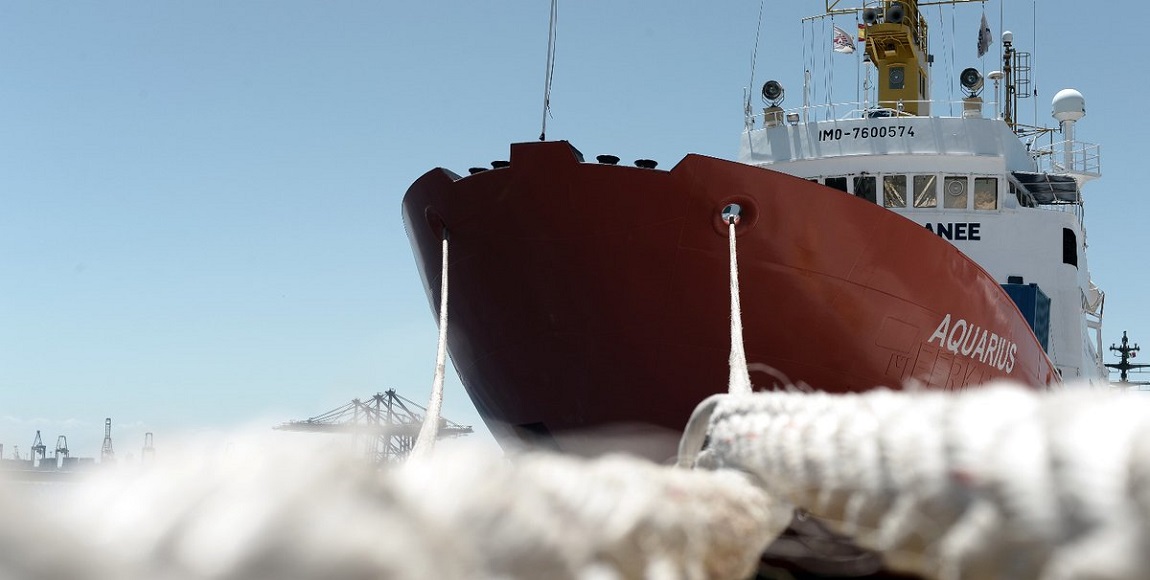 On June 10, Matteo Salvini, Italy’s new far-right interior minister, said he would not allow the MV Aquarius to dock on the Italian coast. The MV Aquarius is a rescue ship that has been operating in the Mediterranean Sea run by humanitarian organisations, SOS Mediterranee and Doctors Without Borders (MSF). The ship has managed to save more than 30 000 people in 170 search and rescue operations. However, the ship has now been banned from docking in Italy.

After more than 36 hours of being stranded in the sea between Italy and Malta, the ship, carrying 630 migrants and refugees were allowed to dock on the Spanish coast. On June 11, Pedro Sanchez, Spain’s new socialist prime minister, offered to accept the refugees into Spain. The ship finally docked in Valencia on June 17.

The days following the debacle saw European leaders all blaming each for their failures in the refugee crisis with the French president, Emmanuel Macron saying the Italian government’s rejection of the refugees were irresponsible with Italy then summoning the French envoy to answer for Macron’s comments.

In response to the arrival of the refugees and migrants, the government of Valencia deployed a coordinated response to help those who come to Spain. Around 1000 Red Cross volunteers helped with medical and psychological evaluation.

Elhadj As Sy, secretary-general of the International Federation of Red Cross and Red Crescent Societies, who oversaw the medical response said: “I would have hoped that welcoming refugees should be such a normal thing to do that would not even attract so much attention and media. I hope there will come a time when we’ll have less people that have to fear for their lives and then flee, and when they come to the countries of destination they will be supported in a normal way without any sensation.”

Despite the actions by the Spanish government, many humanitarian organisations have said while this might mark a change in European policy, the real facts around the policy change need to be developed.

Borrie La Grange, head of Communications at MSF Southern Africa told The Daily Vox in an interview that the actions of the Italian government has turned 630 desperate people into pawns in a political game by prioritising cynical political power players over human lives.

“The underlying issue behind the decision of the Italian authorities to close their ports is a broken European asylum system and the failure of EU member states to relocate asylum seekers who arrive in Italy, their first entry point in Europe. But vulnerable people who have been exposed to abuse in Libya should not be used as political pawns for pressing EU member states to fix the Dublin system,” says La Grange.

La Grange says the asylum system is broken and that European Union’s (EU) politicians are responsible for it. He says that MSF called on European governments to put people’s lives first and to ensure the protection of asylum seekers.

“Many European governments have not prioritized saving lives of vulnerable migrants and refugees at sea. Instead, they have tightened their borders and closed their doors. They have actively supported the Libyan coastguard to return people rescued in international waters to Libya, where they will be forced to endure further inhumane and abusive treatment,” says La Grange.

“European actions of late have been aimed at criminalizing migrants and those who attempt to rescue them with or accusing NGOs of ferrying migrants to Europe,” says La Grange.

The latest incident with the Aquarius comes as, what La Grange calls, a long series of actions that are obstructing the work of NGOs which means that there will be even less capacity for the organisations to do search and rescue work.

Le Grange says it is not a crime to save lives at sea.

June 20 marks World Refugee Day. As the world watches the actions that have been taken by European governments, La Grange says South Africa must learn a lesson from this and avoid doing this at all costs domestically.

In September 2016, Parliament proposed a numbers of amendments to the Refugees Bill which was met with much criticism especially as one of the amendments would require asylum seekers to apply for status within five days of arrival in the country.

La Grange says the Refugees Amendment Bill could cause the ability of refugees to seek asylum to come under threat as they would expose people who are fleeing from unlivable conditions to be put in an even more vulnerable state. Le Grange says it is time for SA to embrace and continue traditions for providing refugees a safe space.

“For South African leaders to take their cue from European leaders would be disastrous to humanity. South Africa and Africa as whole can take the lead and set an example to others, including Europe, on how to humanely treat people fleeing war and conflict. Today, it is in the hands of Africans to help the world reclaim humanity,” concludes La Grange.

Why South Africa Should Not Copy Europe’s Immigration Law

Despite the many obstacles facing NGOs operating in the Mediterranean, the MV Aquarius and MSF teams will be heading back into the waters to carry out their important work of rescuing refugees and migrants.

BREAKING The #Aquarius will leave the port of #Valencia at 2pm today. After an unacceptable 8 day odyssey and 3 days in #Spain, we will be heading back to the international waters off the coast of #Libya to keep on saving lives. Resupply ongoing. Photos: Guglielmo Mangiapane pic.twitter.com/LazcWQn01u