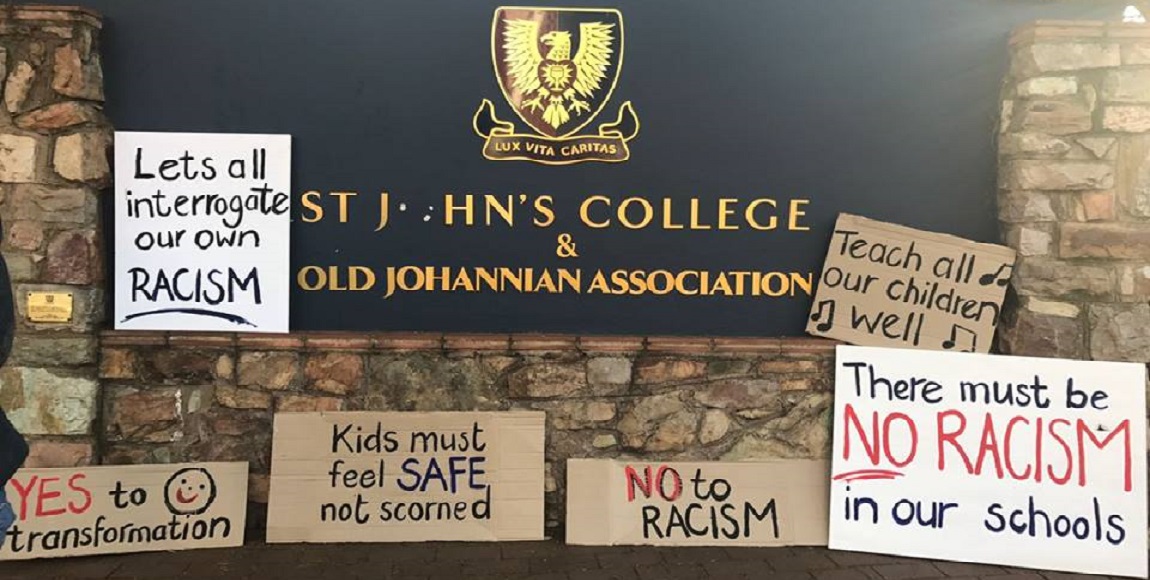 Tensions are escalating at prestigious private school in Johannesburg St. Johnâ€™s College following their lacklustre handling of a teacher found guilty of racism. Concerned alumni, parents, teachers and pupils are calling for an overhaul of senior management and a commitment to transformation – starting with an anti-racism policy. Last week, in a 702 interview, headmaster Paul Edey wrongfully said the school was engaging with Professor Sarah Nuttall – who is also a parent at the school – about transforming and diversifying the school. He has since apologised for invoking her name.

Nuttall explains her struggle in getting the school to commit to an anti-racism policy.

On a Tuesday in September last year I sat down with the Headmistress of St Johnâ€™s Pre-Preparatory School. I am worried about racism at this school, I said to Jane Lane. I am worried for my son. I am desperately worried about the ignorance of parents and the things boys are beginning to say to each other, much of which has obviously come from their homes. It was not enough to talk about care, diversity, difference, I said to her. We would have to address race and racism directly.

Over the next two weeks, the headmistress asked me to speak to the teachers in the Pre-Prep school. We discussed ways to write texts for schools in order to teach anti-racism to young boys. I asked her to convene a meeting with parents, led by black parents, so we could hear their thoughts on this issue. I insisted private schools like St Johnâ€™s needed to radically confront themselves, their legacies, the failures of non-racialism and the need to take action. Universities had received necessary critiques of how they operate and in whose interests; private schools were next.

The headmistress escalated the issues I had raised to a meeting with Paul Edey, headmaster of the school. I told Edey that racism was a clear and escalating problem at schools. St Johnâ€™s needed an anti-racism policy and an office dedicated to this issue immediately. I insisted that school governance structures needed to be reviewed and changed. I asked if I could broker contact with the Wits School of Education to draw in senior black teachers who I thought would be most skilled in talking about racism. Edey said the school does all this already; and that it did not need people to come and talk to the boys.

In late January my child had moved to the Prep school. I went to see the headmaster of the Prep, Patrick Lees. I told him I wanted to help formulate an anti-racism policy for the school. You have an anti-bullying policy, a policy on social media, other policies that are sent home to be signed, I said. You have no anti-racism policy: no breakdown of what racism is, how a boy should proceed if he is a victim of racism or witnesses a racist incident â€“ where does he go, who does he report it to, and what action will be taken. Letâ€™s start drafting a policy that we could take to parents and teachers to be put in place before the end of the year. Lees agreed.

Teamed up with other parents, black and white, we looked at anti-racism policies. We drafted, redrafted, added new content, collected anecdotes from parents about what racism (now) looks like, what forms it takes, how it needs to be countered and stopped. I went to the prep headmasterâ€™s office three more times. We invited parents and teachers from the Pre-Prep and Prep schools to discuss it. A date was set, changed, and set again.

Then, I was called in. A school official told me, we do not want policy. We would like an approach that works with an idea of dignity for all. We donâ€™t wish to single out racism.

I remember the long silence in that room. I disagree with you, I said. South Africa is past constitutionalism to confront racism. Non-racialism has not worked in defeating racism. It may even be that as racism declines in some quarters, it rises on a tide of resentment and white supremacy, in others. Or it happens simultaneously. Our disagreement was deeply political, but it also took us to the heart of the problem: an ethos built on the untruth that if you ignore race, all will eventually be well.

The only way forward now was to meet with parents to discuss â€˜anti-racismâ€™, how to enable our children to be caring, aware, non-racist and non-sexist citizens and collect stories of racist acts and words. This was about two weeks ago. We had over 100 responses to our invitation to parents and teachers, and still more than a week to go. The aim and intention of the meeting: the beginning of a conversation about an anti-racism policy for this school, and a rollout to all schools thereafter.

There is a debate to be had, and I have it regularly, about whether one should place a child in a privileged private school in the first place. One part of that debate is that all forms of stubborn white power must be fought. St Johnâ€™s is more diverse than it was ten years ago. What does this mean if Arlow and his ilk are still there? Or, now that we are rid of him, that so little has been done to address real transformation in this school?

When a class bully once said to my son, “You have a disgusting face,” was it bullying or racism? It was both. My son reported it straight to his teacher. The teacher dealt with it immediately, and the parents were called in by the headmistress. That boy has not done anything like it again. But when I heard a white College boy speaking in the corner of a sports stand to his friends one evening, in front of several girls, in favour of apartheid, I had no direct line to report it to, no one person who would punish him for his hate speech.

On Monday night I joined St Johnâ€™s boys, alumni, several staff, and parents to protest peacefully outside the Council meeting room where a meeting was due at 5pm. When the Council rerouted their meeting elsewhere, we had our own meeting. St Johnâ€™s boys, black and white, talked to us about what they had experienced, seen and heard from their peers in relation to racism, sexism and homophobia. They said that they were speaking of a school that, in the words of one, â€œhas given me so much and taken away so muchâ€.

These stories are the beginning of how to change a school which is now being held to account for failing to meet its duty to protect boys of colour from racism. This school has a number of clear-thinking, politically aware people in it, at all levels. They need to listen to all the stories, embrace the rage that is being felt and has been felt for a long time, adopt an anti-racism policy as a start, and act visibly, determinedly and with speed.

The detailed letter of commitment issued by the school on Wednesday morning is a promise in writing to undertake a series of actions immediately and from here on – and we will need to hold St Johns to these in coming months.

Professor Sarah Nuttall is the director of the Wits Institute of Social and Economic Research.

A Note About Opening The Mosques