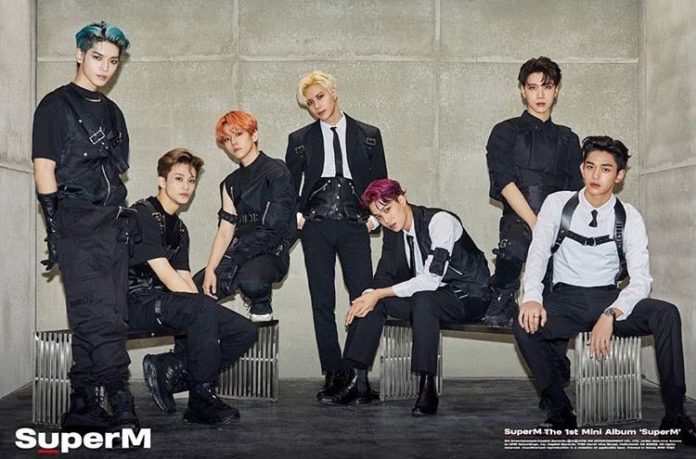 SuperM trended worldwide as the new “super” k-pop group launched. The K-pop industry has a new boy group as of October 4. Launched by SM Entertainment, one of the biggest Korean entertainment companies, and Capitol Music Group, the group is a unique concept. It consists of members of existing groups within the company. The group made their debut with their self-titled album SuperM.

The group’s made up of Taemin from SHINee, Baekhyun and Kai from EXO, Taeyong, and Mark from NCT, and Ten and Lucas from WayV. These are all groups that operate under the SM Entertainment label. Each of the groups is equally successful in their own right.

SHINee is a group that debuted in 2008. Taemin was only 14-years-old when the group made their debut. They’re considered one of the best live vocal groups in K-pop. They are known for their highly synchronised and complex dance routines. Taemin leads the dance line in the group. He brings that talent to Super M.

EXO is arguably one of the biggest K-pop groups. They debuted in 2012 and have won numerous awards throughout the years. Baekhyun is one of the main vocalists in the group. He released his solo album this year to much success. Kai is the main dancer in the group and is seen taking center in the title track, Jopping. Baekhyun, the oldest member in Super M was chosen as the group’s leader during an Instagram live.

The four youngest members of the group: Taeyong, Ten, Lucas and Mark are all part of NCT. This stands for Neo-Culture Technology and is another interesting project from SM. The name refers to the fact that the group has an unlimited number of members divided into multiple sub-units based in various cities worldwide.

In 2019, WayV formed with Ten and Lucas becoming members. The unit is NCT’s Chinese line. Each of the NCT members extremely talented in rapping and dancing. Mark and Ten are the designated English-speaking members for Super M.

The company announced the group would be known as the “Avengers” of the K-pop industry. SM had done this by bringing together some of the most talented members from each group. Jopping has elements of Avengers in it with the popular theme song playing at the beginning of it.

The Avengers, of course for those who don’t know is the Marvel franchise movies that bring together all the biggest superheroes. They come together to fight and save the world. It seems Lee Sooman, the CEO of SM Entertainment created the group with the idea of saving his company or the industry. There is reportedly a deal between Super M and the franchise.

On October 4, the group released their mini-album along with the music video for the title track Jopping. If you’re confused about the title, it’s basically a combination of jumping and popping. The chorus of the song goes: “Now we jumping and popping. We jopping.” It might not really make sense, but that doesn’t mean the song isn’t a jam (which it is).

The rest of the album is filled with many great songs. There’s something for everyone’s taste. There’s the smooth-sounding “2 Fast” to the ballad “I Can’t Stand The Rain”. From start to finish, the album is a true signature SM-sounding album albeit with the new performance-driven vision of SuperM.

The title song, Jopping is amazing while the video is out of this world. Most K-pop videos are an experience and a thrill from start to finish. With Jopping, you can just see the company spent the big money on it. The production value is very high. It feels like a mini-movie.

Continuing with the “Avengers” theme the group has going on, the video plays out like a spy movie. However, the standout thing of the video is performance. Taemin, Kai, and Ten can comparably be called some of the best dancers in their company and in the industry. They display this to the maximum in the video. If you have fast enough internet, we recommend you watch the video in the highest resolution.

There’s the powerful choreography to watch for. There is the alternating dessert and futuristic settings of the video which changes so fast it will leave you breathless. The song features the best of the group’s rapping and vocal abilities. Then there’s Kai “teleporting” into the Dubai desert in the beginning. (EXO fans will recognise this as a nod to his character within the EXO-verse mythology)

Wasting no time to ensure the group gets maximum exposure, the group will be embarking on a North American tour. The “We Are the Future Live” tour kicks off in November and continues into 2020.

Many K-pop groups have tried to break into the world music industry. Of course, there has been an increase in the rise of BTS popularity. Many groups including NCT have traveled to America and Europe and carried out successful tours. However, with the new group, SM has attempted to merge four different fan bases to create a super fan base.

When the group was announced, many fans were apprehensive, especially as they wondered whether their favs would get the recommended attention. That’s likely to still be a huge point of contention even as the group has debuted.

Whether the group makes it as big as is expected of them remains to be seen. However, they’ve made a strong start, to begin with. So you’ll definitely find us “Jopping” this weekend.