Home Online Chatter Everything you need to know about the conflict in Ferguson, Missouri
WhatsApp
Facebook
Twitter
Email
Print 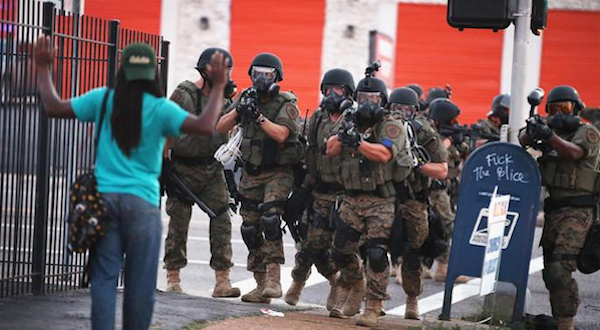 #Ferguson has been trending on Twitter all week. Itâ€™s not a reference to a Premier League football coach. AAISHA DADI PATEL explains.

Ferguson is a city of just over 20 000 in the US state ofÂ Missouri. ItÂ was virtually unknown until August 9, when 18-year old Michael Brown was shot and killed by a police officer. Brown was black and unarmed.

TheÂ FergusonÂ community immediately held a series ofÂ rallies and protested against perceived racism and the excessive use of force against an unarmed teenager. Police reacted aggressively to the protests, brought armoured tanks into the streets of Ferguson and used rubber bullets, teargas, and flash bangs on protestors. The violence escalated from there.

â€œFerguson residents exhibited their lawful right to peacefully protest after Brownâ€™s breathless body lay in cold-blood for four to five hours. What happened next varies on all accounts, but there is no question the protests were initially peaceful. Peaceful protests were met with police departments across the city joining forces in riot gear. K-9 dogs snarled in the faces of a mourning community in search for answers while one police officer was recorded yelling, ‘Bring it on, all you fucking animals!’ Images were paralleled with those of the Civil Rights movement.â€

The conflagration in Ferguson has raised questions about the militarisation of US police agencies. The body armour and weaponry used by police in Ferguson is said to be more advanced than that used by US troops in the invasion of Iraq or in military operations in Afghanistan.

The protests intensified at the weekend. Desperate to contain them, Missouri Governor Jay Nixon called in the National Guard in the early hours of Monday morning and imposed a curfew, after another night of protest descended into chaos with reports of gunfire, looting and Molotov cocktails being thrown.

Sure a good thing those brave brave cops have on camo, can hardly see them… #DONTSHOOT pic.twitter.com/vNlLOwsTUK

One cop seems to be mocking the protestors —> pic.twitter.com/81WsXyvpy3

â€œThese violent acts are a disservice to the family of Michael Brown and his memory, and to the people of this community who yearn for justice to be served, and to feel safe in their own homes,â€ said Nixon.

I wonder if ever in world history there’s been so much military hardware protecting a nail salon #Ferguson pic.twitter.com/JAaHejCMOA â€” Anonymous Operations (@YourAnonGlobal) August 17, 2014

The protests worsened after the results of Brownâ€™s autopsy were revealed — he had been shot at least six times, including twice in the head.

The twittersphere had also reacted to the incident with rage. #Ferguson, #MichaelBrown and most recently #NMOS14, which stands for National Moment of Silence, all trended worldwide this past week.

The hands-up gesture and #dontshoot hashtag have also come to beÂ associated with protests over Brownâ€™s shooting.

Brownâ€™s shooting is the latest in a series of incidents in which black males in the USA have become victims of police brutality.

John Crawford IIIÂ was shot and killed on August 5 for refusing to put down a toy rifle he had picked up while shopping at a Wal-Mart store.

Eric Garner, an asthmatic man, was strangled to death by police in July after he was caught selling cigarettes on the street. TheÂ chokehold tactic the officer used to strangle Garner with is prohibited by the NYPD.

AndÂ In February 2012, 17-year-old Trayvon Martin was shot by George Zimmerman because he â€œlooked suspiciousâ€.

US PresidentÂ Barack Obama has saidÂ â€œmany Americans have been very disturbed by images that weâ€™ve seen in the heartland of our country,â€ and assured Americans that Brownâ€™s death will be independently investigated.

Obama has sent attorney general Eric Holder to speak with officials and community leaders in Ferguson. The presidentÂ is on vacation in Martha’s Vineyard and has been criticised for failing to visit Ferguson himself.