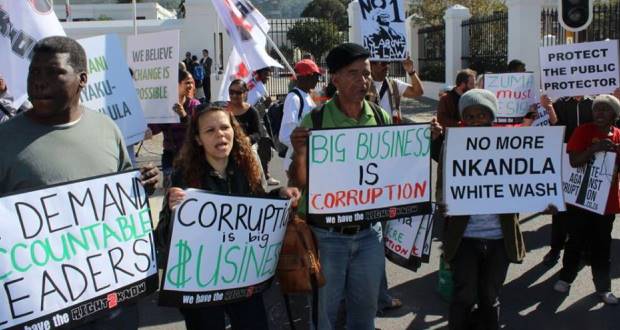 A coalition of trade unions, students and civil society organisations are to march to the Union Buildings in Pretoria and to Parliament in Cape Town on Wednesday, to demand a national intervention against corruption. ZILUNGILE MNISI explains everything you need to know about the march.

So whatâ€™s the deal with this march on Wednesday?
Basically, a group of organisations have come together under the umbrella of Unite Against Corruption to raise awareness about corruption in South Africa, and to demand action from government.

Oh yes, I heard about this march a while back. But then it fell off the radar. What happened?
The march was supposed to happen in August but had to be postponed to allow more organisations to participate.

Exactly how bad is corruption in the country?
There are no accurate statistics on the corruption in this country, but according to the Institute of Internal Auditors, South Africa has lost R700 billion to corruption over the past 20 years. What does that tell you about our democratic governance?

Whoâ€™s running the show?
Former Congress of South African Trade Unions (Cosatu) general secretary Zwelinzima Vavi first flighted the idea of the march, which has been organised by a committee that includes Corruption Watch, The South African Christian Leaders Initiative and NUMSA, among others.

What are their demands?
The main demand is to end corruption in government, another is for greater transparency in party political funding.

So the Rainbow Nation unites to fight corruption, then what?
Well, itâ€™s not all sunshine and roses. The National Economic Development and Labour Council (Nedlac), told organisers they could only embark on a protected strike in two weeks’ time. But the organisers said they applied for permission on time and that this is Nedlacâ€™s way of trying to prevent them from going ahead with the march. They havenâ€™t budged though and have decided to go ahead with an unprotected strike.

Meanwhile the Black Land First (BLF) organisation has refused to participate, saying that it would only serve to bolster former ANC-aligned leaders, like Julius Malema and Zwelinzima Vavi, who they regard as former beneficiaries of corruption, to execute their respective personal vendettas against the ruling party.
Still, itâ€™s estimated that up to 100,000 people could join the march. (Although, this could all just be hot air on the part of the organisers.)

You donâ€™t seem very convinced. Is this whole march going to be a damp squib?
Hard to say. Thereâ€™s likely to be a big turnout and you can expect reams of social media posts about the affair, but will it really do anything to resolve corruption? To confront corruption, we need political will and leadership from the top – and we all know how Number 1 feels about this issue.

And letâ€™s not forget that the the US Securities and Exchange Commission has just charged the Japanese conglomerate Hitachi with paying a â€œsuccess feeâ€ (read: bribe) to Chancellor House, an ANC front company, in exchange for securing contracts to provide boilers to the Medupi and Kusile power plants, both of which have gone grossly over budget.

RELATED: Why Iâ€™m NOT joining the anti-corruption march against our corrupt government

Basically, donâ€™t get your hopes up.

Will you be attending the anti-corruption march today? Tweet us @thedailyvox and tell us why or why not. If you are at the march today, Whatsapp us your comments, videos and pictures: +27764305905.

Featured image via Unite Against Corruption on FacebookÂ