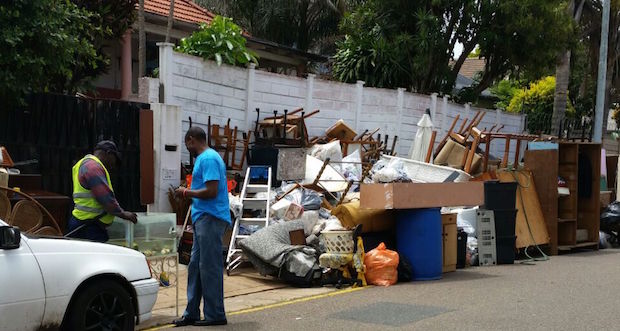 MARIE-ANNE HORSLEY (61) found herself on the streets of Morningside, Durban after her landlady failed to inform her and other tenants of their imminent eviction. She told Zimasa Matiwane about how she became homeless.

The sheriff came around with five guys at 8am or 9am in the morning to remove us. I told the sheriff that we live here and we pay rent. He said he couldnâ€™t let us stay, that itâ€™s what he was told to do â€“ to kick us out and put padlocks on the doors â€“ and now we must all get out. The sheriff then had the five guys move our stuff. I found out form the sheriff that the house had been auctioned last year. Nobody had told us.

The landlady was in town when this all happened. She came back and stayed with us on the pavement until she disappeared on Sunday saying she was going to fix everything for us, for our accommodation.

We were not given any notice to move out. I was kicked out on Friday. I stayed on the pavement outside the house. That night I slept outside with three other tenants, the landlady and her husband.

I have lived in that house since February last year. I paid R1,000 rent a month. I was evicted onto the pavement â€“ I had nowhere else to go.

It was my first time sleeping outside; I did not have a blanket. During the day it was hot and it rained through the night. I slept on a chair. On Friday I had no food, I just had a drink. On Saturday I had a pie. A lady from Olive Church brought food on Sunday. That was my first proper meal since I was evicted on Friday.

I take treatment for high blood pressure, arthritis and I inject insulin for diabetes. Taking medication on an empty stomach made me feel dizzy. I relied on my asthma pump to breathe most of the time. My tablets make me drink lots of water and I had to go squat and wee on the other side of the furniture at night. I ran to Spar to freshen up, but there was no place to bath. My legs were stiff. That was the worst part â€“ not having a place to take a bath and use the toilet.

On Monday the ward councillor came to help us. He found me a room here at the Salvation Army. When I came here, my sugar level was 2.3 â€“ I could go into a coma when itâ€™s that low. I was feeling sick from the sun during the day, the rain at night, sleeping on a chair outside for three nights, and from the hunger.

The landlady keeps on calling me, telling me that I shouldnâ€™t worry, I should stay here at Salvation Army and she will get me a place. I donâ€™t want to talk to her any more: itâ€™s lies after lies. How do I trust her when she left us on the road? My only hope is to get into John Conradie House for the elderly. One of the ladies here is enquiring about whether they have space for me there.

Here at the Salvation Army the rent is R4,000. I live on a government pension; itâ€™s R1,350. I canâ€™t afford to live here. At the end of the month I have to move out. I donâ€™t know where I will go. I have sleepless nights worrying about what will happen to me come month end. I donâ€™t want to be left on the road again. Itâ€™s a terrible thing being homeless. I am scared.

– As told to Zimasa Matiwane.