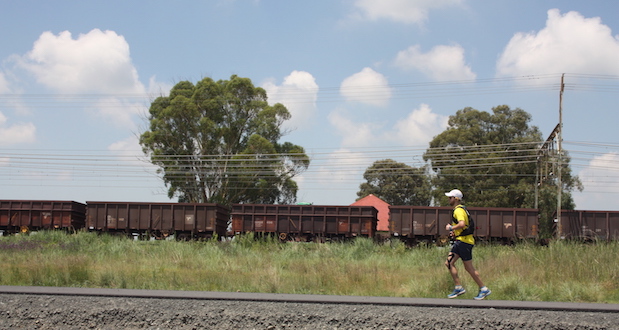 On the morning of January 1, 24-year old urban geographer Brandon Finn started running 40km a day for 10 days in tribute to an unknown part of South African history.

In 1889, 7,000 mineworkers from Hattingspruit in KwaZulu-Natal, together with their families, trekked the 400km from Johannesburg after their trains were commandeered during the South African War. He calls the initiative Expedition Imashi.

Speaking to The Daily Vox, Finn said the inspiration to run the gruelling 400km came in the middle of 2013 after he had just completed a 30-day hike. â€œOne of my friends told me about the story of the 7,000 mineworkers who had to walk from Johannesburg to Hattingspruit in 1899. He suggested that it would be a great new expedition â€“ so I went for it,â€ he said.

As someone who enjoys the great outdoors, Finn says the history behind the mineworkers’ journey was also significant to him.

The story of the miners was captured in South African historian ElsabÃ© Brinkâ€™s book, 1899: A Long March Home. The mineworkersâ€™ journey was undertaken in the shadow of the Anglo-Boer War, which led them to seek safety back in their homelands in KwaZulu-Natal. â€œIt is an incredible part of South Africa’s history; it is not very well known, and it needed to be commemorated,â€ Finn said.

Brink was supportive of his decision to run the 400km; she even showed him the route and the towns that the mineworkers and their families took.

Finn says he is aware that being able to do Expedition Imashi is a privilege many people are not afforded. This led him to the decision to raise funds for the The Big Issue magazine, which assists vendors in transitioning into the formal sector.

A run of this magnitude requires an intense training programme and Finn trained for seven months with the help of a coach. Still, the physical and mental strain of running 40km for 10 days straight took its toll on him.

â€œDays five, six and seven were the most difficult. This was tough because I had already put in so many kilometres, yet still had so many in front of me. This was both a mental and a physical challenge. Once I got past the middle of day eight, I started feeling much better. I think the stress of never being able to switch off during the 10 days was a big challenge,â€Â he said. Finn has completed the run, but Expedition Imashi will officially end only when donations close at the end of January.

Finn says he hopes that this little piece of history will become more well known.

Meanwhile, he is planning more challenges. â€œI will certainly be doing more expeditions, raising more money for worthy causes, and striving to bring a mouthpiece to social and historical issues through completing challenging expeditions,â€ he says.