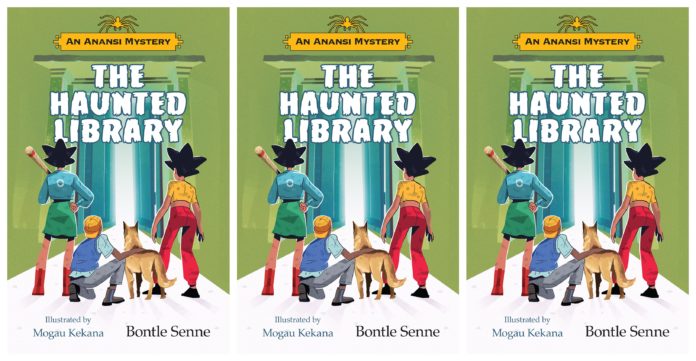 An Anansi Mystery: The Haunted Library is a fun new read for middle-graders. The book features twin sisters, Karabo and Siphe, their friend Bandile and his trained police dog, Zuko, on their adventure at the “haunted library”.

The book is written by Bontle Senne and illustrated by Mogau Kekana. Featuring authentic characters and a truly South African adventure, this book offers young readers the opportunity to explore a magical world in a familiar setting. The book is published by NB Publishers.

The screaming started just as Karabo was about to

“Do you hear that?” Karabo asked, turning to
Siphe, and grabbing hold of her sister’s arm.
Siphe nodded and they both turned to look in
the direction of the sound. Malume TC, the old man
who always shouted at them for laughing too loudly
in the street, was standing at his usual spot under
a lonely lemon tree. Malume started a slow walk to
stand on the narrow strip of pavement in front of
his one-room house, looking in the direction from
which the screams were coming.

The sound seemed to be getting closer. After a
few seconds, Siphe and Karabo saw a dozen men
in dusty blue overalls running towards them. They
had stopped screaming but they were still making
a noise as they raced down the pavement. The old

man cursed and stepped aside to avoid being tram-
pled. Siphe pulled Karabo behind a car parked on

the street and away from the men – some were still
shouting as they passed; others were crying.

One of the men slowed down and the others
left him behind.
Stopping just in front of the old man’s house, he
took off the white plastic hard hat Siphe had seen
builders wear on construction projects all around
their township.
When he bent down, doubling over so that he
could put his hands on his knees, he started to take
deep breaths to calm himself just like Gogo taught
Karabo to do when she got angry.
From their hiding place behind the car, Siphe
saw that the man’s hands were trembling. His hard
hat dropped to the ground and she watched him
clench his hands into fists to stop the shaking.
The old man shouted: “Hey, wena! What’s going
on?” stabbing one finger in the air, pointing at the
obviously shaken man. “Why were you all running
and making so much noise in the street?”
“I’m sorry, Malume, we didn’t mean to cause
any problems,” the man said with an unsteady
voice: “It’s just that . . . things are not right.”

Siphe tried to pull Karabo away, knowing they

needed to get home soon to start on their home-
work. But Karabo shook her head and put a finger

to her lips in a gesture Siphe instantly understood –
neither of the men had noticed that they were there.

Karabo had decided that they should stay and lis-
ten.

Malume TC spoke again over the other man’s
loud breathing: “Heh? What are you talking about?
What’s not right?”
“You know the new library we’re building on
Albertina Street? The project has been nothing but
problems since it started two months ago. I’m sure
you’ve heard about it, Malume. Every day on the
construction site, there have been strange noises.
Sometimes it sounds like children whispering or
laughing but, when we go to investigate, no one is
there.”

Siphe rolled her eyes, but then she saw her sis-
ter’s face and the excited smile creeping from ear to

ear at the ridiculous story they were hearing.

The extract has been published with permission from the publishers.