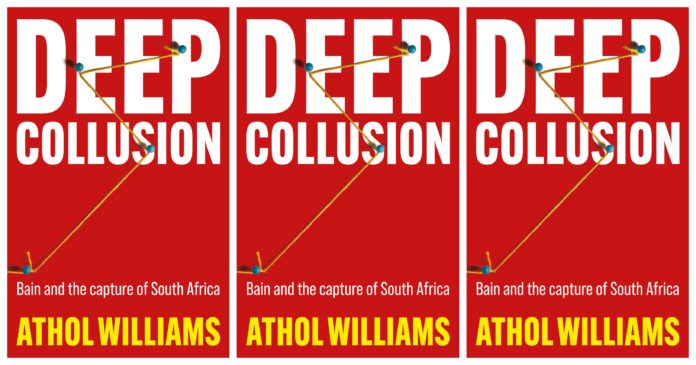 On November 7, writer and poet Athol Williams announced that he was leaving South Africa, fearing for his safety. In his newly released book, Deep Collusion, Williams reveals the reasons why he left the country. The book exposes the greed of corporate corruption. It also highlights the lonely burden of the whistleblower and the great personal cost of telling the truth in the face of overwhelming pressure.

An extract from the book has been republished below with permission from NB publishers. The book is available online and at all good bookstores.

“Why are you doing this?”

I was asked this question repeatedly, by journalists, my wife, friends, my close family, business associates, even Judge Robert Nugent, as well as by many consultants at Bain. It seemed that every reasonable person was perplexed by my risking my reputation to be associated with Bain at a time when it was alleged to have been involved in despicable actions and in lying about them. Just over a week after Massone had testified publicly before the Nugent Commission to Bain’s role in damaging SARS, on 9 September 2018 Bain issued a press statement which included the following:

We have established an oversight committee made up of senior global Bain partners. Athol Williams, a Bain alumnus and a respected independent advisor, will chair this committee on an interim basis. He is a distinguished academic in the areas of corporate responsibility, a corporate leader, and lifelong social advocate. Bain’s contract with Mr Williams calls for him to do what is right for South Africa, without restrictions.

I was right in the thick of an investigation into one of the biggest corporate scandals in South African history. Estimates of what the damage to SARS cost the country in terms of lost revenue ranged from R50 billion to R100 billion. I had seemingly nothing to gain from sticking my neck out, hence the puzzled looks and the frequent questions.

My willingness to get involved was built on a few beliefs. I believed that Bain was a good company that acted with integrity. I believed that Bain wanted to fix the situation in South Africa. I believed that companies must be held accountable for wrongdoing and that they bear a responsibility to make amends for social harms they have caused. And I believed that I could help Bain achieve a good outcome for South Africa and for them too, given my track record with the firm and my knowledge of management consulting, corporate governance and business ethics. I took very seriously the adage that bad things persist because good people do nothing. I considered myself a good person and felt that I could contribute to righting a very wrong situation.

As it turns out, I was the perfect candidate to fall for a con. “It’s the oldest story ever told,” writes Maria Konnikova in her book The Confidence Game: Why We Fall for It . . . Every Time, which details the psychology of being conned. “The story of belief – of the basic, irresistible, universal human need to believe in something that gives life meaning, something that reaffirms our view of ourselves, the world, and our place in it.” I had spent the bulk of the preceding six years immersed in philosophical study at Harvard, the London School of Economics, and Oxford. My head was filled with new ideas and, indeed, new beliefs about new social and economic possibilities in the world. I had been studying, researching and developing ideas for institutional change that advanced social justice in society, and the responsibility borne by corporations to contribute to this change. Helping my former employer through its crisis would enable me to contribute to justice, put some of my theoretical ideas around corporate reparations into practice, and earn some money to shore up my depleted savings from six years of full-time study. These factors combined to prove the truth of Konnikova’s statement about susceptibility to a con: “When it comes to predicting who will fall . . . one of the factors that emerges is circumstance: it’s not who you are, but where you happen to be at this particular moment in your life.”

Being home after my years of study abroad gave me the opportunity to explore academic job opportunities, and in time I was appointed as a senior lecturer at the University of Cape Town’s Graduate School of Business, in the Allan Gray Centre for Values-Based Leadership. My plan was that I would teach and conduct research into corporate ethics and ethical leadership and make progress on my PhD thesis. Little did I know that a month later these plans would be scuppered, and I’d be enduring the most tumultuous period of my life.

Just over a month after returning home, on 30 August 2018, I sat gobsmacked at home, staring at my laptop screen, watching Vittorio Massone’s testimony before the Nugent Commission, which was investigating the near collapse of SARS. Bain’s managing partner for South Africa gave bizarre answers to simple questions, and his body language was that of defeat. It was obvious that something had gone drastically wrong at Bain, but exactly what wasn’t immediately clear. I was not surprised. I had already seen this coming in 2010 when I resigned as a partner over my concerns about Massone’s and Bain’s attitude and behaviour in South Africa.

The next day Massone testified again, but even before he gave his testimony I was fired up to take action. I wrote an email to Paul Meehan, Massone’s boss, expressing my disappointment at what I was learning about Bain’s behaviour in South Africa. Meehan was head of EMEA (Europe, Middle East, Africa) for Bain and sat on the firm’s highest executive decision-making body, the Global Operating Committee (GOC). In my email I wrote that the main reason I had left in 2010 was “my concern over leadership behaviour and attitudes” and that “some of my concerns are playing out now”. In the email I offered my support, although I mentioned that “I am not entirely sure how you might find me useful”.

When Bain partner Tiaan Moolman sent an email to Bain’s former employees in South Africa with commentary on the Nugent Commission, I again wrote of my disappointment in an email: “I am deeply disappointed in what I am seeing, hearing and reading.” This email exchange led to further communication and, combined with my offer of support to Meehan, sparked active discussions about how I could use my knowledge of corporate ethics to contribute to a process to resolve the crisis. I was encouraged by Moolman’s email of 5 September 2018 in which he wrote: “There is a very genuine desire from Manny Maceda [Bain’s global managing partner] down to the team in SA left to address the disaster to DO THE RIGHT THING.” He wrote about seeking to “find the right way forward, true to our values”. I was also encouraged by Bain’s press statement of 2 September 2018 in which the firm stated that it was “undertaking a deep and extensive investigation into all matters relating to our work at SARS” and that it would be “completely open and transparent” about the findings of this investigation because “we believe that is what the people of South Africa deserve”. If Bain was willing to acknowledge its wrongful acts and make amends for the harms caused, then I would gladly support its efforts. Furthermore, in its public statement Bain stated that it would “cooperate with the [Nugent] Commission of Inquiry” and mentioned that it would “support a process aimed at restoring SARS to the once credible institution it was known as”.

Over the next few days Moolman and I exchanged emails and phone calls. In a call on 6 September, he asked for my advice on handling the crisis and asked me to think about the roles I could play. Any support I offered Bain would come at the expense of my thesis and duties at UCT.

Drawing on my work in corporate reparations, the following day I sent an email to Moolman outlining a “process of repair” that Bain could follow. In terms of how I could help my old employer, my suggestion was that I “advise on a process of repair and solution design” and that I “keep the process honest”. I suggested that in future we could possibly consider a more public or operational role to implement any remedial plans developed. Importantly, in this email I emphasised that I had a “hierarchy of interests” that put South Africa at the top of my agenda, my own interests second, and Bain’s interests third. In other words, I wanted to ensure from the outset that my involvement would not entail defending or protecting Bain but acting in the interests of South Africa to bring remedy for harms that Bain had caused.