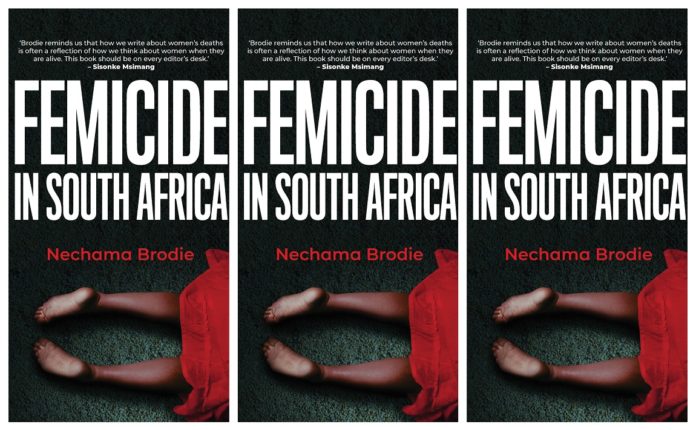 Femicide In South Africa is the latest book by author and journalist Nechama Brodie. The book looks at the story of femicide in South Africa from the past forty years. An extract from the book is published below with permission from the publishers.

Nearly 3 000 women are murdered in South Africa each year. That’s  an average of eight femicides every single day. Can you imagine trying to report not only on the eight new female mur- ders that day, while also reporting on the investigations, arrests, court cases and all the other narratives of  every other murder that preceded them? You wouldn’t just need an entire newspaper, you’d need a phone book every few  hours (if anyone remembers what phone books are), manned by an actual army of journalists. And that’s just for femicides. The reality is that most newsrooms no longer even have dedicated crime or justice reporters, never m ind separate pol ice  and cou rtroom reporters.

There is also fierce competition for space on the page – even with online platforms, prime property is at a premium. Professional news platforms and publications are usually commercial ventures, which means they need to be profitable or at least sustainable. And that means telling stories that your readers believe are important or interesting, sometimes at the expense of  other stories that are perhaps just as important or worthwhile but which, for various reasons, don’t appeal to your readers. Activists sometimes like to pretend as if this is not the case, in the same way some people pretend carob tastes just the same as chocolate. But it’s not only the media who are mercurial and base and driven by trashy celebrity news and tabloid  gossip. Audiences are too. It’s why we raise voices and arms in protest against the killings of Karabo Mokoena and Uyinene Mrwetyana, and don’t know even the name of  the unemployed woman who lived in a shack and got drunk with her husband on Friday night and then they argued, and he didn’t realise he had beaten her to death until he tried to wake her up the next morning.

Like it or not, we  are equally fickle and frequently hypocritical when it comes to which victims matter to us, which bodies count. And we  show this year after year, by deciding that some cases matter more than others. Which is not to say that these mega cases don’t matter – of course they do. The killings of Valencia Farmer, Eudy Simelane, Anni Hindocha, Anene Booysen, Reeva Steenkamp, Jayde Panayiotou, Susan Rohde, Marthella and Chris- tel Steen kamp, Teresa van Breda, Karabo Mokoena, Uy inene Mrwetyana, Zolile K humalo, Franziska Blöchliger … These are individually, stories of great pain and horror, and which devastated families and communities. But they are also not representative (at all) of the reality of femicide in South Africa; nor do they represent  the challenges and limitations of  the current police and justice systems. Uyinene’s killer, for example, was arrested, tried and sentenced within three months of her murder. More typically, cases can take months or even years to get to court – and that is if the perpetrators are ever arrested. Coverage of mega cases makes the average South African intimately familiar with concepts like ‘dolus eventualis’ but leave us poorly informed about the comparatively banal or mundane aspects of  everyday femi- cide, including any real understanding of who is at risk.

One of the most interesting and perhaps problematic examples of how this plays out can be seen not through mega cases, but by analysing how South African media covers femicide stories by race.

Let ’s start by discussing how overall media coverage of femicide breaks down by race.

This requires a slightly expanded discussion on race in the context of news reporting and murder. The attribution, identification and experience of race in South Africa is still strongly aligned with apartheid-era  categorisations  and  has  specific meanings and connotations that are not necessarily common with other regions.

In the broader South African context ‘black’ or ‘African’ usually means black African, and may include some mixed-race indi- viduals; ‘white’ typically means Caucasian; ‘Indian’ refers to South Africans of Indian origin; similarly, ‘Chinese’ (both ‘Indian’ and ‘Chinese’ may be used to refer to recent, that is, first-generation immigrants who were born in those countries, or equally to in- dividuals whose families have lived in South Africa for multiple generations); ‘Coloured’ refers to ‘a phenotypically diverse group of  people  descended largely from Cape slaves, the indigenous Khoisan population and other people of  African and Asian de- scent’9, often described as being of mixed-race origin but associ- ated with specific communities and histories rather than being a catch-all for mixed-race individuals. Unlike the use of  the term in North America, ‘Coloured’ in the South African context is not the same as ‘black’, although coloured individuals may choose to identify as black.

Gender and race also influence risk profiles for violence, which is why it is important to make these factors explicit in research about violence. The Medical Research Council notes that while the ‘concept of “population group” or “race” and its constituents, i.e. “Asian”, “Black”, “Coloured” and “White” are social constructs and are not meant to signify any inherent genetic or biological differences between these groups’, they are ‘used as demographic markers where such profiling allows for identifying vulnerable populations in order to plan and implement effective prevention and intervention programmes.

Within this exceedingly complex context, which cannot ade- quately be covered in this book, the notion of race is important and relevant to understanding  societal data including crime, but it is contested and unfixed. Which means that attributing or inferring race to victims of crime, particularly to deceased individuals, is a challenging proposition – even at a medical level.

In South Africa the official cause-of-death certification (form DHA-1663) is supposed to be filled out by the ‘medical practitioner/ professional nurse/forensic pathologist’11  who determined the cause of  death, and includes a section where the practitioner is asked to ‘[s]elect the race group’ that they consider the decedent to belong to. The Medical Research Council’s femicide studies and other similar mortality studies in South Africa use racial cate- gorisations derived from either police and /or post-mortem re- ports, but even these can include a sometimes large proportion of uncertainty. In the 1999  femicide study, for example, 15.6  per cent of non-intimate victims’ race was categorised as unknown.

These ambiguities obviously make it challenging to infer racial identification from news reports,  as this information is not generally explicit. It is nonetheless  important to include data on race in order to examine the potential role played by the race of both the victim and the perpetrator in media coverage of violence against women.

In my media research, information about victims’  race was determined where possible using a combination of  provided information that could be used to positively include or negatively exclude a victim or perpetrator from a race category. This included photographs of  the victim or the victim’s  family, using the victim’s surname (for example, ‘Singh’ is likely to be Indian, while ‘Dlamini’ is likely to be black), or using her location – for example, an elderly victim living in a rural village in the Eastern Cape is more likelyto be black. However, these approaches do include an unknown degree of uncertainty and recorder bias. Where infor-mation included in news reports was insufficient to include or exclude a victim or perpetrator from specific race groups, their race was recorded as unknown.

In the total sample included in my  initial femicide study, if we look at the 408 victims, 57% of the women were black, 18% white, 5%  were coloured, 3%  Indian, and in 18% of cases the race of the victim could not be determined from the information supplied in the news reports. What appears to be a possible over-report- ing of the proportion of white victims is partly explained by the fact that most newspapers are situated in urban areas, which have higher proportions of white residents – whites make up less than 9%  of  South Africans overall but in Gauteng they might make up as much as 16% of the population. The under-reporting of black and coloured victims would probably be offset to some extent by the ‘missing’ race information in the unallocated 18% of cases noted.

When we look at the number  of  stories per victim,  by race, though, a completely different profile emerges – and one which shows that, although white victims only make up 18% of the total number of victims, their deaths dominate news coverage by the sheer volume  of stories. More than 56% of news stories about femicide were of white victims, while news stories of black and coloured victims only made up 26% and 15% of news coverage respectively.

This book is available at all bookstores and online.