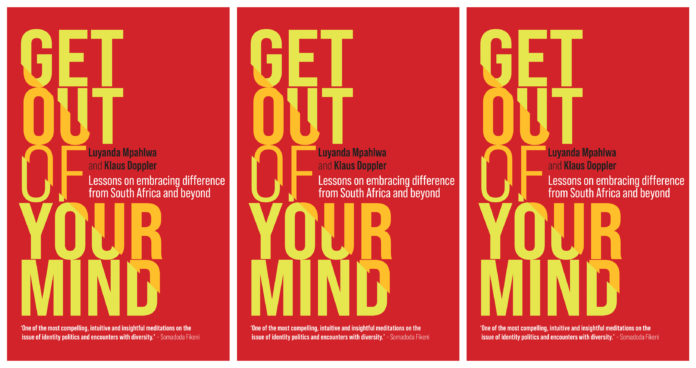 In “Get out of your Mind: Lessons on embracing difference from South Africa and beyond” Luyanda Mpahlwa and Klaus Doppler use their shared experiences. They present practical tools for managing change and transformation in this new context. The pair share personal insights into their different worlds and ways. They show how they personally deal with issues of identity, culture and otherness.

I grew up in the small town of Mthatha in the Eastern Cape, the former homeland of Transkei. I knew nothing about architecture and nothing about design. isiXhosa does not have a word for architecture because building is done by communities and not by specialists. I have come to realise that this rural background had a major influence on my thinking as an architect, as did my upbringing, culture and my socialisation. They all played an important part in my practice and understanding of architecture.

In apartheid South Africa, all schools and universities were divided according to race. Consequently, I went to a school for black people only (Bantu Education Act2). ‘Bantu Education’ did not encourage us to take subjects with technical and creative content and I was never taught how to draw and did no artwork at school.

After completing high school education in 1976 – during the time of the Soweto student uprising – my father encouraged me to pursue engineering studies because he believed engineering was the future. My mother suggested architecture because she remembered that on the two-kilometre walk to school, I had drawn a house on my school slate and shown it to her. In those days, architecture was not offered in universities for black people. It was offered in universities for white people.

This was the essence of apartheid – racial separation of all amenities.

From this background, I witnessed one of the most significant historical changes in the world: the end of apartheid. The 1976 uprising, which was led by students and left about a thousand dead, was to be a turning point in the history of South Africa. Many left the country to join the liberation movements, while white universities began opening their doors to black students. This was one of the first signs of the reform of apartheid laws.

Despite these changes, I was only able to enrol for my architecture studies in 1978, two years after matriculating. It took me a year to obtain a permit, a kind of forced gap year. I was among the first group of black students allowed into the hallowed white halls. When I was a child, there was not a single black architect in South Africa. It was believed that black people ‘could not think in three dimensions’ and therefore ‘there was no point in teaching them to design and to be creative’. We heard similar comments from some of our lecturers who couldn’t understand why we had enrolled for architecture.

This is a story for another day.

My decision to study architecture was also my protest against apartheid segregation. Although I was allowed to study at the University of Natal in Durban, I was not allowed to live on campus because the university was in a whites-only residential area. As per the Group Areas Act, I could not live in such an area. All black students at Natal University, then called the University of Natal Black Section, had to live in Austerville, a township outside Durban. Here our residence, the Alan Taylor residence, was located in a former army barracks. To get to class and back meant four hours in a public bus every day.

Despite the opening of the universities, the political tensions in the country and the brutality of the state increased throughout the 1980s. Everything I faced was a struggle that could only be won through my convictions, my belief in justice and human rights, a belief in myself and my determination to pursue my quest for freedom and democracy. Thus was my thinking shaped.

Because of the uprising of 1976, and the brutality of the 1980s, I became politically active as a student, as did most young black people. During that time, activism was risky, even for students, because the major political organisations had been banned in the 1960s. In 1981, the political conflict in Durban reached a peak and a number of my friends and comrades were arrested. I had to live ‘underground’, frequently changing my place of residence to avoid being caught. Yet I managed to write my examinations that year. Then, on 3 December 1981, police arrived at my examination room and arrested me as an anti-apartheid activist.

After a year in pre-trial detention in solitary confinement, I was brought to trial in the Supreme Court of Pietermaritzburg as a key witness in a treason case against members of the then-banned ANC. In the dock were the late Judge Patrick Maqubela, Mpumelelo Gaba and Mboniswa ‘the General’ Maqhutyana. In a political act, the five state witnesses, of which I was one, along with Bulelani Ngcuka (who later became the Director of Public Prosecutions), Litha Jolobe, Mpilo Taho, Mbulelo Hongo, refused to testify for the prosecution and were convicted to prison terms of up to five years. I was convicted on a charge of ‘refusing to testify’ and sentenced to imprisonment in Robben Island high security prison.

On Robben Island, my commitment to freedom and justice was strengthened. I broadened my political horizons and gained a deeper understanding of our struggle for freedom and democracy, thanks to the lessons from my fellow political prisoners, primarily from the

ANC, but also from those of other political parties. I benefited from the wisdom of Mandela and his comrades of the Rivonia Trial – Govan Mbeki, Walter Sisulu, Ahmed Kathrada, Andrew Mlangeni, and others. I also had the benefit of the younger leaders, such as former President Kgalema Motlanthe, with whom I shared a cell in G-Section, and Tokyo Sexwale, who was one of the leaders in B-Section.

I was released from Robben Island in 1986. At the time, South Africa was in a state of emergency and the risk of ‘re-arrest’ or ‘disappearance in mysterious circumstances’ was ever present. With the help of Amnesty International, I went into exile from Umtata (now Mthatha) in what was then Transkei, via Gaborone in Botswana, to Germany, where I lived for fifteen years, completing my architectural studies at the Technical University of Berlin in 1997.

International solidarity played a major role in the struggle against apartheid. Apart from the major international actions and initiatives of the anti-apartheid movements, there was also support at a personal level. In my case, this meant a plane ticket to Germany.

My escape, together with my younger brother (who has unfortunately since passed away), was a dangerous nighttime undertaking.

Fortunately, in Germany I was welcomed by a childhood friend, Mavik Matutu, who was already studying architecture at the Technical University in Darmstadt. A group from Amnesty International in the Ruhr area, together with the pastor Ben Khumalo, oversaw those who, like me, had fled the nightmare of apartheid South Africa. Soon I was accepted into the refugee programme of the Diakonisches Werk and undertook a language course in Bochum. Later, in Berlin, my studies were co-financed by the Friedrich Ebert Foundation.

Like many students, I supported myself through student jobs at the TU-Berlin’s student employment agency (TUSMA). This meant that I – a freedom fighter – quickly had to learn a new way of being self-sufficient.

Dr Luyanda Mpahlwa is a Cape Town based architect and urban designer. He obtained his master’s in architecture at the Technical University of Berlin. He is the Director of DesignSpaceAfrica. He is also a former Robben Island political prisoner who went into exile in 1986.

Dr Klaus Doppler is a German management coach, organisational consultant and author of several non­fiction books. He became known through his contributions on the subject of change management. His book Change Management has been translated into several languages and is considered a classic.