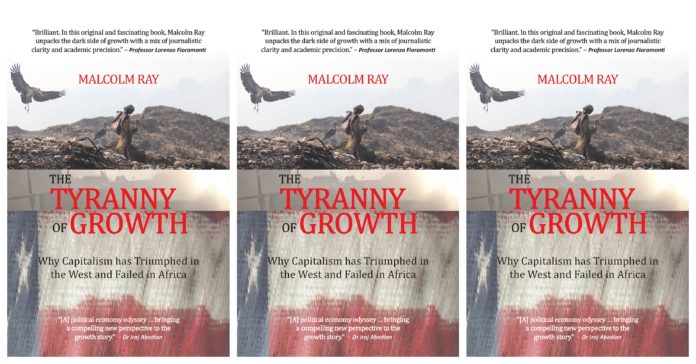 Set in the past, The Tyranny of Growth is a book about the present. It provocatively recounts how and why the 2008 global financial meltdown and present COVID-19 pandemic have become the leading cause of governments’ and multilateral institutions’ global spectacular failure.  Written by Malcolm Ray, The Tyranny of Growth  strives to give the reader a new way of imagining the world and transcending the limits of the disaster that is all around us by offering new and brilliant ideas to achieve change.

The extract below has been republished with permission from the publishers.

When, in 1987, US Secretary of State George Shultz insisted that the US government policy direction could damage the economies of developing countries as surely as natural calamities, he probably had his own government’s experiences in the front of his mind. The World Bank concurred, establishing a subsidiary to insure foreign direct investment in developing countries, while the US lobbied the Inter-American Development Bank to reorient lending to favour foreign investment.

But foreign investment as a ‘solution’ to developing country financial problems neglected a few facts. First, the transformation of existing debt into equity did nothing to increase the net financial resources of developing countries. At best, it allowed them to defer some payments because profits on equity need not be paid as regularly as interest on loans.

In vain did local economists try to convince their medicant governments that the US had become a net importer of direct investment funds; that US investments in developing countries had “long been self-financing, using their borrowings in host countries to transfer profits back to the US”.

Such investments no longer included Latin America, where US banks had been losing money and scaling down their operations. Perhaps there was another way. What if investment funds for other developing countries came not through the established US corporations but through recycling the money that had fled? Baker led the way, publicly asserting the need for other developing countries to create a favourable environment for private investment.

The entreaty to foreign ownership, the dismantling of state sector natural monopolies, the phasing out of government participation in industrial development, and the moves toward an exchange of international debt for equity – were now extended to Africa. It was the dawn of the age of what would become known as ‘neoliberalism’ in Africa, a policy arena in which IMF structural adjustment conditions would demand of African countries the sell-off of their assets for loans – the ABC of debt-equity swaps.

The 15 April 1988 edition of The New York Times carried a photograph that sat incongruously alongside the headline, ‘Nigeria Opens its economy’.The picture was of a nickel-and-dime Nigerian street vendor behind an assortment of goods decked out on a makeshift stand in the capital, Lagos, and it captured the basic dynamic of a vast informal economy that pulsed alongside the atrophying formal one.

The New York Times, through the late 1980s, was an irrepressible crusade against economic nationalism, and it was especially aimed at swashbuckling American businessmen eyeing developing countries in Africa, where the transition to the market economy had just begun. Every businessman who had known Nigeria’s populous economy instantly recognised the scene. Despite its abundant oil endowments, Nigeria was a creaking deficit-ridden economy whose only redeeming feature was to allow people the indignity of ‘self-employment’ as survivalist street traders. Its crude oil revenues had fallen from $25 billion in 1980 to $6 billion in 1987. From 1985 to 1987, per capita income in a country of 107 million people around that time dropped from $800 to $380.537 In formal recognition of the new poverty, the World Bank had just announced plans to reclassify Nigeria from a “middle-income” country to a “low-income” country.

Without adequate revenue inflows from domestic economic activity, its foreign debt obligations had breached $27 billion by 1988 and sent its federal state officials scrambling to the IMF to reschedule the debt. Now the debt was an opportunity to get in on the action, and it was American and European multinational corporations, not banks, that were angling on new bargains.

The Nigerian government had decreed a sweeping privatisation plan involving sixty-seven state companies, including the national airline, and the partial privatisation of the major banks. “For those who know Nigeria, the climate is so improved that it’s the difference between night and day,” one American, who had ten years of business experience in Nigeria, was quoted as saying in The New York Times piece. The difference between day and night, of course, depended on which side of the Atlantic you were.

Central to Nigeria’s privatisation decree was a new debt-equity swap programme agreement with the IMF and creditor banks to reschedule payments due on Nigeria’s $27 billion debt.

After General Muhammadu Buhari’s coup in 1983, the military government used the cover of war on corruption to speed up the privatisation of state companies, whose shares would be sold to loyal servants of the new regime and foreign investors. The instrument was the loan-back scheme, the reconversion of dollars to the local currency, the niara, and the repatriation of those dollars to the United States Federal Reserve Bank.

With the petrodollar rush around that time came huge contracts for public works programmes, which were handed out to Western companies that were colluding in bribery. “A legal scam; a disguised form of capital flight,” is how Stephen Ellis, a leading scholar who had lived in West Africa, described the scheme to me. “Basically, the foreign companies made common cause with Nigerian politicians to rip off the Treasury, and for banks this was perfect. Because they could facilitate these repatriation deals between Western companies and the Nigerian elite … it was the start of an unending party of grand theft.” Zaire, similarly, introduced liberalisation measures at almost exactly the same time: removing price controls, eliminating subsidies, abolishing major import controls, cutting government expenditures and phasing out public sector companies in exchange for the purchase of debt by foreign investors.

Some forty-seven state companies were scheduled for liquidation or ‘reorganisation’ on commercial lines, including Air Zaire, the Compagnie Maritime Zairos and Petrozaire. And the red carpet was rolled out for foreign investors, with the free repatriation of profits permitted for the first time in a decade. With unemployment and the price of basic goods rising sharply and the black market legalised, Ronald Reagan publicly expressed his “admiration” for Zaire’s efforts.

However, generating foreign investment, either for new projectsor to purchase the established companies, was still something of a problem. In May 1982, when Zaire’s kleptocrat Mobutu Sese Seko’s appalling human-rights record finally convinced the US Congress to cut off economic ties, Zaire restored diplomatic relations with Israel, which promised to fill the gap and to help Zaire in its relations with the US. Realising that restoring ties with Israel had cost him $350 million in Arab aid, Mobutu promptly signed technical operation agreements with Israel and a deal giving special legal protection to Israeli investments. In return, the Israel lobby to the US pushed Congress to step up American investment in Zaire.

What he was doing to the economy, Mobutu was also doing to public security and law enforcement – turning them into his own fiefdom. From Israel, Zaire also received more of that weaponry from PLO stockpiles that apparently rivalled those of the Bolshevik Red Army. In essence, Israeli advisors and Western military equipment created an elite unit to protect Mobutu – from his own army.

What Congolese citizens were witnessing was a consolidation of power in the hands of one man – the creation of a police state and the birth of a dictatorship. Israel had authorised a multi-million dollar plan to reorganise, retrain and re-equip the Congolese security forces from top to bottom, under the control of Mobutu, to suppress any form of protest against his continued rule. It was an extraordinary gift. The instrument was the loan back securitisation scheme.