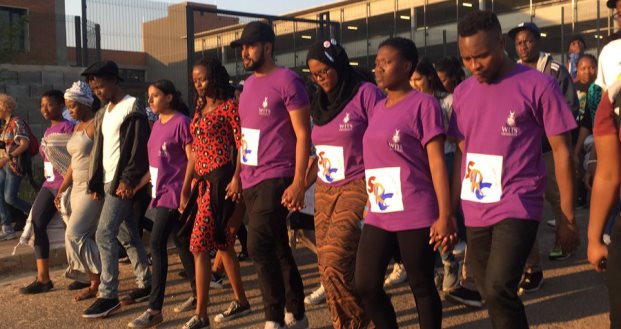 Fasiha Hassan, spokesperson for the SRC at Wits University, says students are deeply saddened by the death of a worker during the ongoing protests against the cost of tuition at the university. On Monday afternoon it emerged that a worker contracted to Wits at the Jubilee Hall of Residence passed away last week, after students released a fire extinguisher in the building.

â€œThe worker was rushed to the Campus Health and Wellness Centre and then taken to hospital where the worker was treated for a few days. The worker was discharged from hospital and then passed away,â€ the universityâ€™s spokesperson Shirona Patel said on Monday.

In a statement released on Tuesday, Patel confirmed the name of the cleaner as 39-year-old Celumusa Ntuli. He had been admitted to Milpark Hospital on Tuesday, where he remained and was treated for three days and was then discharged. He returned home but developed complications and passed away while being transported back to hospital.

Patel said that the cause of death has not been established yet, but campus Control and the company that employed Ntuli are investigating the incident. The university passed on its condolences to Ntuli’s family, loved ones, colleagues and friends.

Students protesting across Wits campuses on Monday received news of the death during a march.

â€œWhen we received the information we turned the protesting down and had a moment of silence and we committed to meeting with the families and providing whatever support we can,â€ Hassan said.

Asked whether the death of the worker would influence a change in tactics of the student movement at the university, Hassan said students were already reviewing the efficacy of their strategies.

â€œThere’s a lot of rethinking already happening. We’ve spoken about researching the model, redirecting energies in different directions other than what we’ve been doing now so I think that discussion has already happened,â€ she said.

JUST IN #Fees2017 Nzimande says Wits confirmed death of the worker – who was asthmatic and apparently forced march. They are investigating

â€œWe also want to call out the university and Minister Nzimande for their very dirty politics,â€ Hassan said. â€œThere is no way that a human life can be used to delegitimise a protest or delegitimise a very noble cause, and that is something we reject.â€

She emphasised that students saw the worker as one of their own, and questioned the manner in which government and the management had released the news.

â€œWe are disgusted at the university and the minister for releasing that information on a public network without consulting the family and the university community. And that for us is very disrespectful,â€ she said.

What about the #Wits worker who has died as a result of inhaling fire extinguisher fumes set off by protestors? Outraged& heartbroken. RIP

â€œWe need to speak with proper facts, because right now there is a lot of speculation around the cause of death, and we can’t really speak until we formally know,â€ Hassan said. â€œAt the same time, we need to give some space to the family and space to the forensics to complete their work.â€

Editors’ note: This story has been updated with a statement from Wits University.