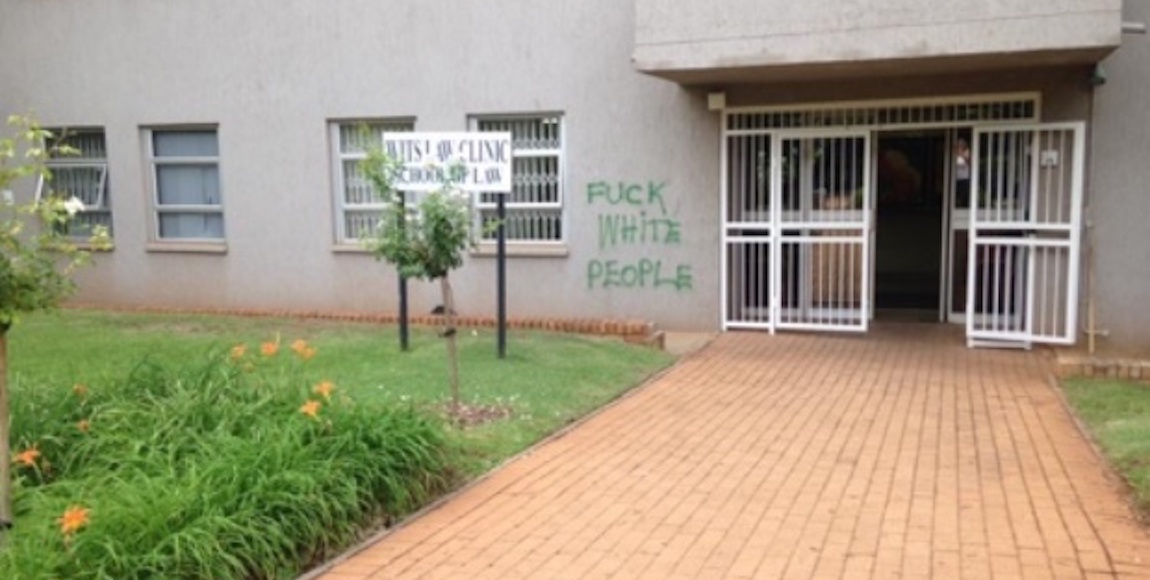 On 4 July 2017, the Judge Thulare of the Equality Court in Cape Town handed down judgment in a case filed by the Cape Party against the Iziko Gallery. The complaint was filed after the gallery displayed a poster which featured the phrase â€˜Fuck White Peopleâ€™ repeatedly as part of an exhibition on the role of protest in democracy. The artist Dean Hutton had been inspired to create the piece after another student faced expulsion after wearing a shirt painted with the same words. The poster was displayed with a pair of gold boots, a chair and a label which explained Huttonâ€™s motivation to create the piece. The label read â€œâ€¦white pain demands attention all the times, while black pain flows constantly… what we must strive for is complete dismantling of the systems of power that keep white people racist. Learn to fuck the white in you too.â€

After the piece was exhibited, the Cape Party lodged a complaint with the Equality Court under the Promotion of Equality and Prevention of Unfair Discrimination Act, 2000 (PEPUDA). Their complaint alleged that Huttonâ€™s piece, and the phrase â€˜Fuck White Peopleâ€™ was unfair discrimination based on race and was also hate speech. While the Act lays out definitions for these offences, one of the biggest factors in determining whether expression amounts to hate speech is context.

Consequently, much of the decision was focused on what the phrase meant in the context of Huttonâ€™s work and the exhibition as a whole. The Cape Party had highlighted the Oxford dictionary definitions of the words â€˜fuckâ€™ and â€˜whiteâ€™ but Thulare viewed South African usage of to be more complex. When considering the meaning of the word â€˜whiteâ€™, Thulare highlighted Madibaâ€™s famous words about â€˜White dominationâ€™ from the Rivonia trial and Albert Lutuliâ€™s description of apartheid as “oppression, white supremacy and race discrimination”. The court found that in the context of Huttonâ€™s work, the phrase ‘Fuck White People’ actually meant ‘reject, confront and dismantle structures, systems, knowledge, skills and attitudes of power that keep white people racist.’

Following this understanding, Thulare then had to decide whether Huttonâ€™s work amounted to unfair discrimination based on race or hate speech under the Act. The key aspect to both unfair discrimination and hate speech with the context of Huttonâ€™s work is whether the speech incites violence or harm against people based on race. The court held that Huttonâ€™s work did not incite any form of racial violence and, consequently, did not contravene the Act. Beyond this, both PEPUDA, and the Constitution, provide special free speech protections for artistic expression and scientific work and so Huttonâ€™s work would have been protected under these sections.

Thulare highlighted how it is natural for those who enjoy and benefit from white privilege to find challenges to this comfort distressing and that â€œ[i]n this festival of ideas, one needs to be sensitive to Black pain and White Fearâ€. The court held that dialogue which contributes to the creation of just and democratic society must be allowed and should not be stifled by those in positions of privilege.

It is important to recognise the role of privilege and history in determining whether certain kinds of expression are hate speech or unfair discrimination. Thulareâ€™s judgment highlighted the substantial history of racism created, maintained and propagated by white people in South Africa, but this same legacy does not exist in the case of black people and so-called â€˜reverse racismâ€™. While the phrase â€˜Fuck White Peopleâ€™ calls for movement towards a more just democracy in South Africa, a phrase like â€˜Fuck Black Peopleâ€™ would likely be viewed as a more hateful call that promotes apartheid-era ideology. Thulareâ€™s judgment is an important recognition of the historical structures that maintain white privilege and how, though it may be painful, the privileged few will need to change to allow for the creation of a new South Africa.