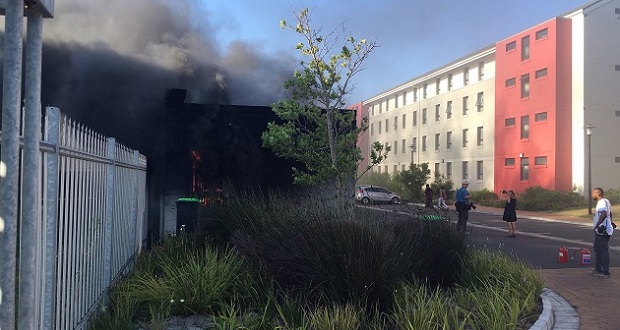 Management at the University of the Western Cape (UWC) suspended all face-to-face classes at the university due to the FeesMustFall protests that have been going on for the past four weeks. Students have been given the option of writing their exams in November 2016 or in January 2017.

On Tuesday night, police and private security reportedly entered residences searching for protesting students who they believed were hiding from them.

#Fees2017 #UWC Police and security officials moving in to one of the residences on campus. KB pic.twitter.com/CtO3guMvNy

#UWC students are saying police are getting into their residencies and searching. Students say they’re afraid. #UWCshutdown

Protests at the university escalated on Wednesday after the university did not meet with students and informed students that they could not comply with the studentsâ€™ demands.

Onke Lokothwayo, a member of UWC Fees Must Fall, said that students from UWC SRC and UWC Fees Must Fall met with management on Monday. He said that management gave them the same responses theyâ€™ve always been giving them, which students feel are inadequate. The students then gave management 48 hours to give another response to the students. They were supposed to meet on Wednesday with the chairperson of the universityâ€™s council, Mthunzi Mdwaba.

Lokothwayo said: â€œWhat happened last year was the management agreed to some of our other demands and the chairperson of council said itâ€™s null and void.â€ This is why students wanted Mdwaba to be at the meeting.

Before the meeting was due to take place yesterday, petrol bombs were found on campus and management declined to meet with the students.

Lokothwayo claims the petrol bombs were not there when patrols were done by the bomb squad on Tuesday and they were probably planted. Afterwards, students became agitated because management then sent around an email which, students say, did not address their demands.

Students at UWC have been demanding – along with the call for free, decolonised education – for the issue of dangerous location of studentsâ€™ residences to be addressed, for all debts to be scrapped and for 10GB of data for students living at residences. The university responded to the studentsâ€™ 40 demands in a statement, but students are still unsatisfied with management’s response. Students began protesting violently and clashed with police.

Lokothwayo said: â€œPolice started shooting and it was a mess. A building got set alight. I donâ€™t know by who. I donâ€™t have that information at the moment. Windows were broken by police. Some students got shot through windows. A differently abled student was hit by private security and his legs were almost broken and the private security told him, â€˜I want you to not be able to walk againâ€™.â€

Students who had been hiding from police were only allowed back at their residence at about 2am. Lokothwayo said the students had to go to othersâ€™ rooms because they could not return to their own rooms for fear of being arrested. They were also told by police that they could not walk in groups even though the students did not feel safe walking alone because the â€œpolice were hunting them downâ€.

The situation is currently calm with students due to meet to discuss the way forward and strategise. They also plan to visit the students who have been arrested who are due in court on Friday. According to UWC Fees Will Fall on Facebook, 37 students have been arrested and they are collecting funds for their bail. It is unclear however, where the arrested students are being held. Students have said that the arrested students are at the Bellville South police station, but the police station could not be reached for comment.