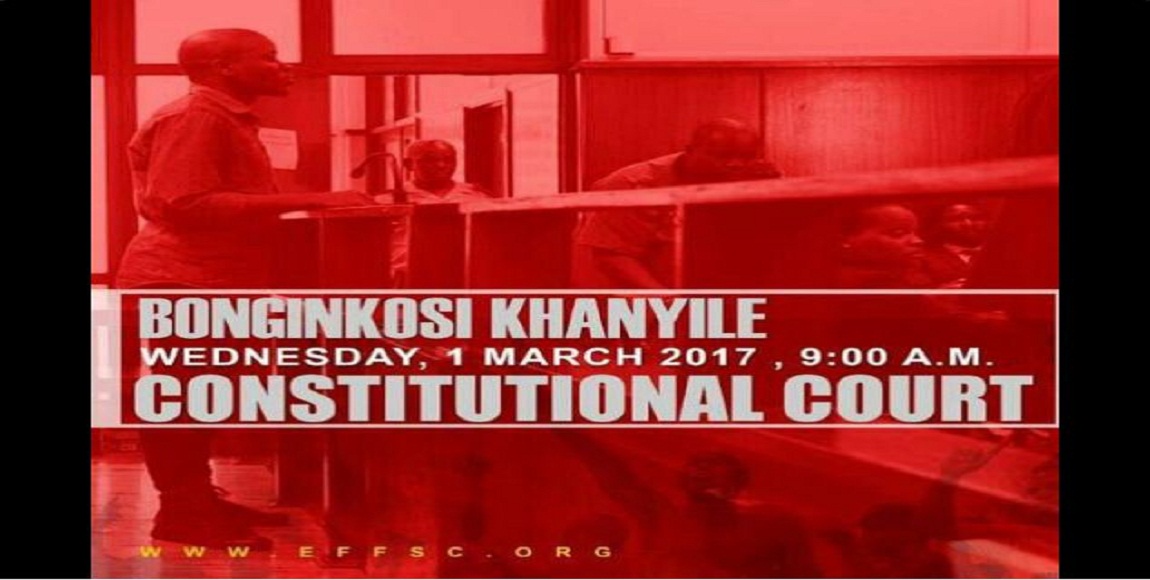 An unprecedented battle for student leader Bonginkosi Khanyileâ€™s release on bail was taken to the Constitutional Court – the first bail application to be taken to the highest court in the land.

Khanyile was arrested with 28 other people on 4 February 2016, on various charges related to the #FeesMustFall protests. The next day he was granted bail, with conditions, but was arrested again on 27 September during further protests. He remained in jail for almost six months as his legal team took his fight for bail through the magistrates courts, the high court, and even the Supreme Court of Appeal (SCA), where he lost each time.

On Wednesday, the Constitutional Court granted him bail of R250. The conditions of Khanyileâ€™s release include that he must not intimidate staff and obstruct the work of the police. He will be reporting back to the Durban magistrates court to face the charges against him.

Khanyileâ€™s defence, led by advocates Dali Mpofu and Tembeka Ngcukaitobi, argued that the magistrate had misinterpreted and misdirected the law when passing judgment on denying Khanyile bail after his arrest for his role in student protests last year.

The state, represented by advocate Andy Bester, argued that Khanyile was still a threat to public safety. He has been detained in prison for almost six months and had to write his exams in prison. Despite the difficult circumstances, he obtained four distinctions.

People following the case were frustrated at the lack of live coverage of the hearing.

no live coverage on TV #BonginkosiKhanyile

The EFF had marched to the Constitutional Court in solidarity with Khanyile. The gallery was filled to capacity with journalists, party members, and students. EFF leader Julius Malema and formerly detained student leader Mcebo Dlamini were also present.

The hearing began at 10am and the first argument, presented by Ngcukaitobi, was on the magistrateâ€™s misinterpretation of section 60(4) of the Criminal Prosecuting Act. The stateâ€™s charges against Khanyile were: convening or gathering without notice, convening or attending an illegal gathering or demonstration, interference with police duties in an illegal gathering, and trespassing.

Mpofu argued that there is no evidence of Khanyile being a ringleader, which was one of the stateâ€™s defences. The advocate, who is also a member of the EFF, made the argument that a reason why Khanyile was still in prison is because he is an EFF member. Chief Justice Mogoeng Mogoeng stopped Mpofuâ€™s argument, saying that conspiracy theories donâ€™t help the court.

Mogoeng wondered why Khanyile has been kept in prison for so long. â€œRapists get bail, murderers get bail,â€ he said.

His only crime was to fight for a black child to have decent and free education. Today Bonginkosi must sleep at his home #BonginkosiKhanyile

Mpofu argued that according to the prosecution team, President Jacob Zuma had instructed authorities to clamp down on Fees Must Fall protests, and that they wanted to make an example of Khanyile. However, Mogoeng said Mpofu’s statement was dangerous because it meant the magistrates and judges were part of these authorities.

After a short break, Mpofu resumed the defenceâ€™s submission. He stated that what stood out about this case was the overzealous nature of the prosecution of this case by the National Prosecuting Authority (NPA), which ignored the initial findings of the SCA. The SCA changed its judgment after the KwaZulu-Natal director of prosecutions insisted on the appeal going ahead.

Mpofu: Many other students who did worse things are roaming streets. We come back to that he’s being made an example #BonginkosiKhanyile

Khanyile was denied bail on the grounds that he had violated the conditions of his bail and the state felt that, because of his past actions, Khanyile was a threat to public safety. They also felt that he would commit those offences again. They used the fact that Khanyile had been expelled from college before as a testament of his character.

Bester moved on to defended the decision of the lower courts to deny Khanyile bail. The Chief Justice reportedly gave him a hard time.

#BonginkosiKhanyile C Justice Mogoeng is asking Adv. Bester (for state) to explain what factors were relied on to keep Khanyile in prison

Mogoeng asked the state to explain that while there were many student leaders involved in the movement, why Khanyile was being singled out.

In its arguments, the state alluded to the burning of buildings. They claimed the magistrate saw that there was a likelihood of that occurring. It was not clear if they were alluding to the possibility of Khanyile being involved in those acts had he been released.

Mogoeng: So it’s burning of property and what else? (asking reasons why he was denied bail, wants clear factors) #BonginkosiKhanyile

The state maintained that Khanyileâ€™s previous conduct cannot be ignored when considering whether heâ€™ll incite violence again. They believed that he will likely break the law.

#BonginkosiKhanyile Bester says he used a slingshot. Mogoeng asks if there’s a likelihood that he will use a slingshot again.

Khanyile’s team argued that such a reliance on his past conduct is unfair. â€œThe correct approach,â€ the submission said, â€œis to determine the probabilities … to assess the future conduct of an accused.â€

CJ Mogoeng is questioning Adv. Bester whether #BonginkosiKhanyile‘s detention is as a result of what the Fees Must Fall protests stood for

Chief Justice Mogoeng asked this because, in the magistrateâ€™s judgement, it that said â€œall of this is a result of his actionsâ€.

Bester said that Khanyile expressing that he would do anything for the movement shows what he is capable of doing.

” When we revolt itâ€™s not for a particular culture. We revolt simply because…we can no longer breathe”
Fanon #BonginkosiKhanyile pic.twitter.com/1WxlGDdEik

The Chief Justice asked the prosecution if they considered Khanyileâ€™s case an exceptional circumstance. Bester replied that the courts found it so.

Mogoeng: Why couldn’t he just be charged for using a sling? And for using the m-o-e-r word? If that is an offense? #BonginkosiKhanyile

It seemed that matter was still not clear to the Court. Justice Mbuyiseli Madlanga asked the prosecution why the state had not reviewed the bail application because new facts about the case had been brought to light.

The prosecution had apparently not considered this as Bester responded that he canâ€™t answer Justice Madlangaâ€™s question. This induced laughter in the gallery. The state was given ten minutes to formulate an answer to the Justiceâ€™s question.

#BonginkosiKhanyile When Chief Justice Mogoeng asks you so many questions for clarity, it usually means things are not going well for you.

Acting Deputy Chief Justice Bess Nkabinde also asked Bester how long Khanyile will be detained for because a trial date had not even been set.

All in all, the hearing went well for Khanyile. The judgments that were passed by the lower courts were dismissed. Initially, the Court set bail at R1 000. After the Justices had convened and discussed the agreement, bail was reduced to R250. So far, the state has not opposed the Courtâ€™s decision.

This is a historic, and long overdue, moment for Khanyile, his family, and the struggle for free higher education. The ruling of the Constitutional Court has, in some peopleâ€™s eyes, shown that the apartheid-era tactics used by authorities will not work.