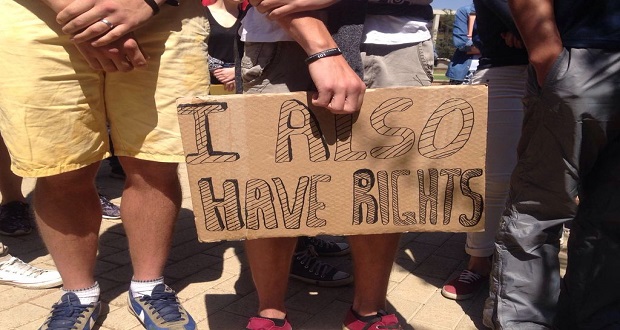 On Wednesday, a group of students at Wits University tried organised a silent march from the science stadium to the Great Hall under the banner of â€œTake back our Wits.â€

The students said they are in solidarity with Fees Must Fall but they want the academic programme to resume.

The protest trended on Twitter under the hashtag #TakeBackWits and peeps wasted no time in calling the students out for their privilege, among other things.

Here are some of our favourite tweets:

See all those people who are taking part in #TakeBackWits.

You won’t find them when the #TakeBackTheLand movement starts

Hey, #TakeBackWits, prove to us you got some coordination.

Ofcoz #TakeWitsBack is a silent protest. They don’t have struggle songs coz they’ve never struggled.

Surely you can get a refund on international flights if you have travel insurance. No? In that case, #TakeBackWits.

Do you want to #TakeWitsBack because your hoilday plans are non-refundable? Must be niceðŸ’…ðŸ’…

Come on guys, weâ€™ve BEEN renaming streets in the CBD. We only just got used to saying Miriam Makeba Street instead of Bezuidenhout Street.

#TakeBackWits South Africa is not ready for a White Hero. We are still renaming CBD Streets

White privilege is not contagious, people. But perhaps it’s rubbed off on some folks?

To my black sisters and brothers who are for #TakeWitsBack please remember. White privilege is not contagious.

In the spirit of reworking songs for Fees Must Fall (Like Babes Wodumoâ€™s â€œWololoâ€ ), Comrade Bae did a young remix of Beyonceâ€™s track â€œHold Up.â€

On #TakeWitsBack; #HoldUp they don’t love u like #FeesMustFall loves you! It’s not the right to study, it’s the right to pay u fighting for!

And while some of us are struggling to keep our eyebrows on fleek, others have eternal protection from police on fleek.