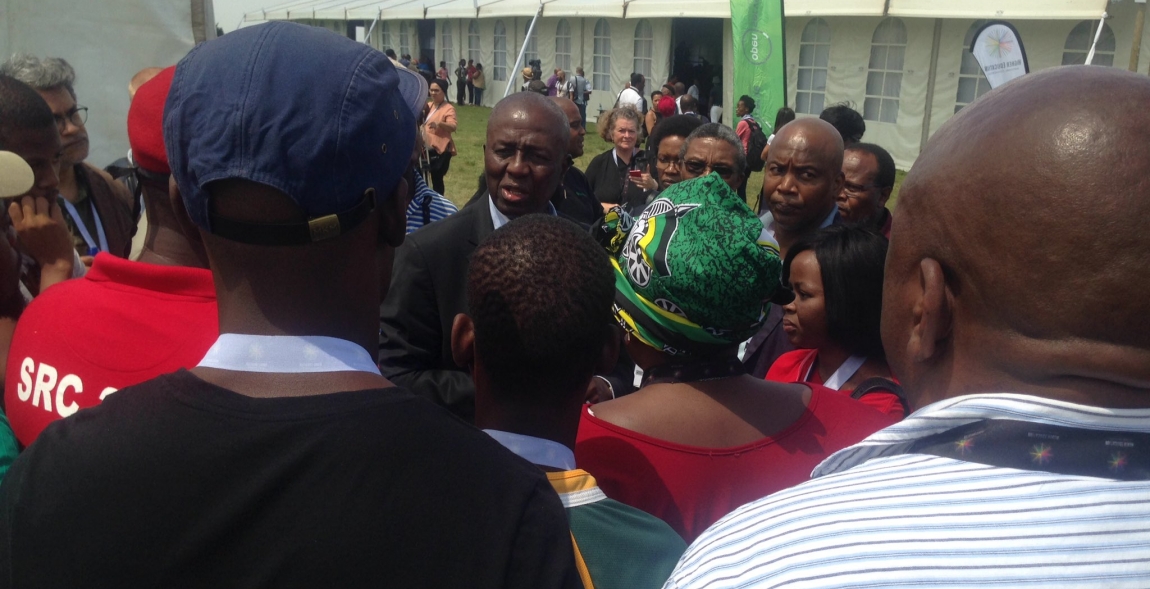 Behind one of the many buildings that dotted the Eskom Learning Centre in Midrand, a huge white marquee had been erected for the Higher Education National Convention due to take place on 18 and 19 March. Various stakeholders from government, student leadership, and civil society were to gather and discuss ways to solve the higher education crisis that is facing South African tertiary education.

Rows upon rows of chairs filled the tent with a huge podium erected in the front of the tent. Justice Dikgang Moseneke, various student leaders and Higher Education Minister, Blade Nzimande were due to take to the podium at 9am. However, the programme was significantly delayed as student leaders from around the country were caucusing before arriving at the venue. This was according to the programme director, Irvin Phenyane.

Waiting around, I found myself talking to the person sitting next to me, a woman from an insurance company who started an internship programme for university students. She said she hoped more answers would be gained from today.

That was not be.

At around 10:40, students had arrived and settled down, signalling the start of the programme. However, there seemed to be an arrogance emanating from people like Phenyane and Moseneke in their actions.

It came from things like Phenyane trying to emphasise there was no hierarchy in the room, yet the vice-chancellors scored the good seats at the front. It was also in the way the students were acknowledged for their bravery in making the nation see the crisis happening. I couldnâ€™t help but wonder if the efforts of the students are really appreciated – especially by the older generation – considering how the entire movement has caused so many to question their privilege and positionality in a way that has made many uncomfortable.

This was not the space in which I could see discussions about decolonisation happening.

There was also a sense of ignorance from the conveners, I felt, with their mention of thanks to banks, which caused inevitable cries of â€œwhite capital!â€ from students. Judging by some of the faces of the vice-chancellors in the room, there seemed to be such surprise that the students donâ€™t respect â€œeldersâ€, evident in the fact that the students are calling out the older generation and trying to carve a space for themselves.

Many disruptions preceded the final one when it was decided by the conveners the event would be postponed.

While everyone gathered outside after the first disruption, I asked a fallist what was happening and he said it was because there was discussion over whether a white AfriForum member could be allowed to address the crowd. While the resistance to allowing a white person to speak on decolonisation was understandable, it was far more puzzling why five minutes prior, objections had been raised by student organisations, PYA and EFFSC when a fallist took to the stage.

Itâ€™s hard to keep up. Fallists – who form part of the non-partisan Fees Must Fall movement – are not recognised by SRC members, as well as the students from various political parties. All of them are fighting the system but wonâ€™t recognise one another. All the parties agree on the importance of the fight for free, decolonised, quality education and insourcing of workers, yet party politics, personal differences, and other factors seem to be keeping the movement back.

I am relatively unfamiliar with the inner politics behind Fees Must Fall, which as of 2016, got very confusing very fast. I canâ€™t say Iâ€™ve become more aware of the nuances of the movement and I certainly canâ€™t comment on its intricacies fully, but it was disheartening that petty politics seems to have taken over.

As the various student leaders took to the stage, they were booed at times by other students and then applauded when they said something the students agreed with. It is all so confusing.

Speaking to students from various political affiliations provided little clarity as each blamed one another for the breakdown in the convention and eventual postponement. One told me that it was the other who came with an agenda to disrupt, while some claimed innocence and blamed all the other parties. No one wants to listen to each other, even though many of the students said they came to listen and get solutions.

Being a student as well as a journalist gives me an interesting space to navigate these gatherings, but that all seemed to fade away as I ran out of the main tent as students clashed. My job as a journalist was furthest from my mind as a group of people seemed to hurtle towards me and I had to get out of the way to avoid getting knocked down while watching someone else fall down.

Attending the event was not a waste of time, but demonstrated one important thing. Each of the stakeholders said they were not being listened to – yet when others spoke, they didnâ€™t listen. Students are out there being suspended, expelled and financially excluded from universities. Colonialism and apartheid are at the root of the deep structural problems facing higher education (unless of course, youâ€™re a Democratic Alliance leader who believes otherwise – the partyâ€™s student body was mysteriously absent on Saturday), and itâ€™s important to open up conversations and seek solutions to these issues.

After Saturday though, I realised itâ€™s not just students who need to introspect but all those other stakeholders who are supposedly committed to the struggle. I get why students don’t want to listen to those in authority because they feel like they’ve failed them. But as to reasons why they don’t listen to each other, I really don’t know. Because if everyone talks but no one listens, will anyone hear?