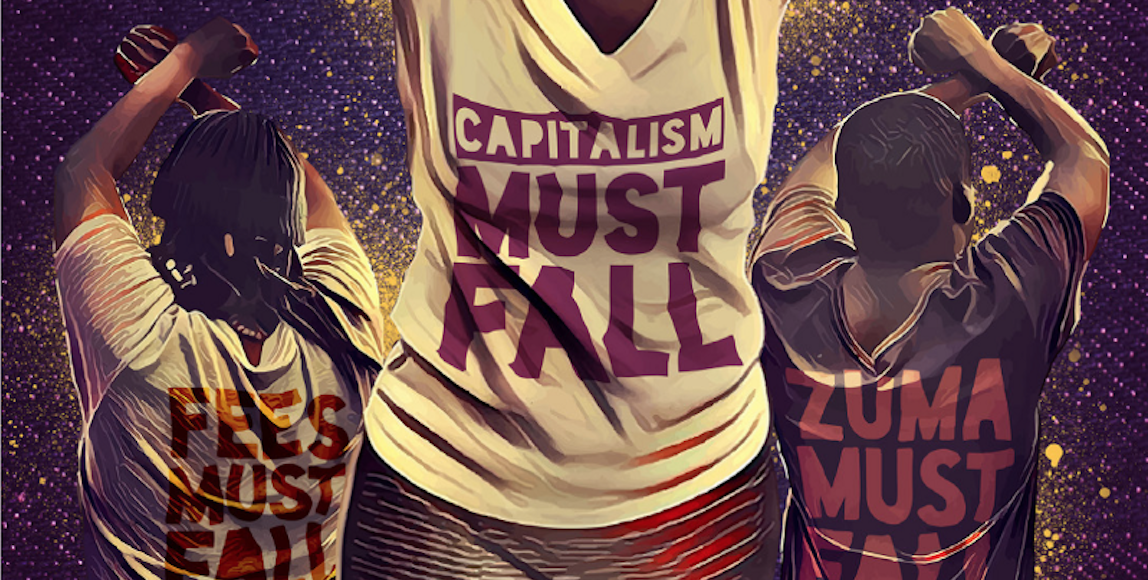 Over the last few years, Fees Must Fall and Zuma Must Fall protests have mobilised thousands people around the country. Mehul Sangham argues that, despite their differences, these movements have one thing in common: they both miss the point.

Twenty-two years after the release of Nelson Mandela, South Africa is still a society marked by entrenched institutional racism, ubiquitous social and economic inequality and political crisis. Today, according to a 2016 research paper which draws evidence from 1.2 million personal tax records, South Africa remains one of the most unequal societies in the world: 10% of the population owns 90-95% of all assets, compared to elites in other rich countries who own between 50% to 75% of all assets. This inequality is even more stark between racial groups, with the white population dominating the top 10% of this already exclusive group.

It is the lack of justice in the aftermath of apartheid, most visibly manifest through staggering levels of inequality, and the emergence of a new elite who have benefited from the crony capitalism, that most clearly sum up the crises that South Africa faces today. And over the past three years, the ‘must fall’ memes have provided a way for South Africans to discuss the state of their country and demand change.

Fees Must Fall (FMF) took off in October 2015, continuing the conversations started by Rhodes Must Fall (RMF), but demanded a reduction of tuition fees and living costs. In April 2017, Zuma Must Fall (ZMF) became the rallying call in response to President Jacob Zuma’s corruption scandal. At The Rules, we analysed 700 000 tweets that carried the hashtag #FeesMustFall in order to better understand the movement, its drivers and the sentiments that pervaded it. Later, when the ZMF movement arose, the scope of the analysis was expanded to include another 700 000 tweets for #ZumaMustFall.

As a result, we have been able to compare and contrast these two movements – their similarities, their differences, and what they say about South Africa today. What we found is that while both the FMF and ZMF movements have been able to draw attention to a common underlying theme with some success, neither goes far enough with their assessment of the problem. As a result, neither presents a narrative of radical change the nation so desperately needs.

From the conversations on Twitter, we learn that FMF was a diverse movement with groups ranging from LGBT, to pro-Palestine and feminist communities propagating the meme. It was self-organising in that despite its beginnings in Johannesburg, conversation and actions spread throughout the country and further. The movement was about unearthing the trauma of the past, and reclaiming the future, but rather than adopting a hopeful tone, the overarching sentiment of the movement was of anger and injustice.

Interestingly, the data analysis reveals that messages spread through student movements, not through the mainstream media. While FMF made national and international news, and that coverage helped spread the meme, the media did not make up more than 11% of the discussion.

ZMF was a very different movement. The conversation was dominated by the three main political parties: the ANC, the EFF and the DA. It appeared to be championed on social media predominantly by these polarised political voices, with people from diverse political and social backgrounds not very actively engaging. While Fees Must Fall wanted a reckoning for the past, Zuma Must Fall sought to forget it: the sentiment of the movement was one of reconciliation, arguing that the colonial past was not the issue, but rather an incompetent South African presidency.

Zuma Must Fall constituents would probably have described the movement as a well-behaved revolt, and saw maintaining nonviolent behaviour as an important factor to distinguish theirs from the student movement. From the viewpoint of FMF protesters, the insistence on civility denied the very basic impulse and need for symbolic violence as the actual means of deep institutional transformation.

It is clear that the ZMF movement, despite coopting the â€œmust fallâ€ meme which began as a decolonisation rallying cry, did not itself have a strategy of decolonisation. However, that doesnâ€™t mean it hasnâ€™t contributed to the overall decolonisation movement: ZMF still serves to show that the colonial forces within South Africa have mutated into a new form. The government of Jacob Zuma doesnâ€™t bare the traditional hallmarks of racial and economic privilege, yet it is still oppressive, and accused of benefiting the elites.

It is the underlying causes of oppression that neither #FeesMustFall nor #ZumaMustFall challenges directly. At the core of both movements are the limitations of an economic model whose sole purpose is to generate more capital; a model where civil rights are subsumed by the rights of those who can produce more capital. In connecting the dots between the legacy of the apartheid regime and the existing structures, we find a common enemy: late-stage capitalism. In FMF it is manifest in the conversation about how higher education serves those who have been economically privileged as beneficiaries of the apartheid state. In the ZMF movement, capitalism is embodied in the new ruling elite.

Though not explicitly, both movements did recognise the importance of economic transformation, and the way economic structures put power in the hands of the few at the expense of the many. But where is the call to dismantle that system? Where is the exploration of alternatives? Even at the height of the movements, the analysis of Twitter data shows that neither pushed the conversation to recognise this crucial perspective – that a transformation of the underlying economic logic is needed. As the public conversation continues, perhaps it is time for South Africans to adopt a new meme that represents their shared struggles, Capitalism Must Fall!

Mehul Sangham is technology director at activist collective The Rules, and a PhD student at the University of Cape Town. Follow @therulesorg on Twitter.

All images provided by Mehul Sangham