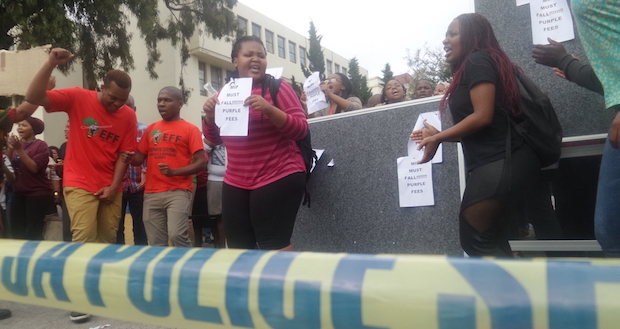 Protesters at Rhodes University have now joined students at Eastcape Midlands College, an FET college in Grahamstown, who have been on strike for the last five weeks over non-payment of their NSFAS grants for living expenses from the college. STUART LEWIS reports from Grahamstown.

After meeting with them outside the gates of the college both groups of students attempted to force their way through the main gate of the FET institution. Grahamstown police, who were on scene, fired three stun grenades to disperse the protesters, according to the SAPS’s ColonelÂ Monray Nel.

Students, who at first thought the stun grenades were tear gas and rubber bullets, fled the scene. One protester fell and cut her head but she was tended to by first aiders from the Black Student Movement.

Rhodes vice-chancellor Dr Sizwe Mabizela, who had been holding a meeting with students at the Barratt lecture venue on campus, arrived on the scene an hour later and attempted to speak to a representative from the college but was not allowed into the premises.

He then pleaded with police to de-escalate the situation. Nel agreed to this so long as students stopped attempting to gain entry to the college grounds, adding: â€œControl your people and Iâ€™ll control mine.â€

In the meeting at Barratt earlier, Mabizela and university management agreed to fully support the students in their protests. He also proposed a solution to to the Minimum Initial Payment (MIP) issue, which would also assist international students who currently have to pay 100% of their fees for Rhodes upfront.

He also invited students to take part in the university budget discussions about the proposed fee increase for 2016, which has not yet been finalised. Mabizela noted that student fees would only be used as a last resort to balance the books but cautioned that the university could not legally draw up a deficit budget. He also suggested that all parties work together to find alternate funding sources.

As outsourcing of labour has been raised as a significant issue at other campuses across South Africa, Mabizela was also asked about how Rhodes handled its labour practices. He pointed out that the only outsourcing Rhodes does is to supplement itsÂ security staff through the private security company,Â Hi-Tec.

Most Rhodes support staff are employed full time, directly by the university but the local branch of trade union NehawuÂ has raised issues in the past about staff being employed on temporary contracts, which are never converted to full-time work.