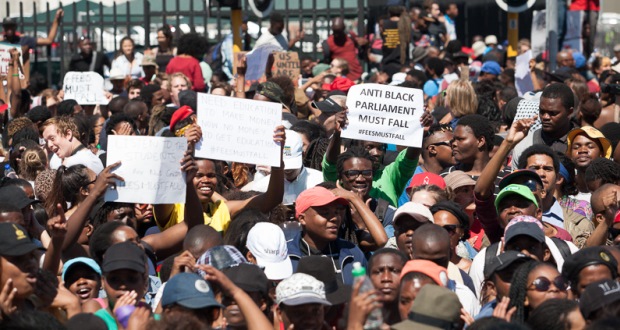 The top three political parties competing in the 2019 national elections have all released parliamentary lists, and all three have made important nods to youth leadership. However, that is no automatic guarantee that youth issues will be centered in their policies and laws. Looking at their past record tells us a lot about how they’ll approach young issues. By SHAAZIA EBRAHIM and FATIMA MOOSA.

Election day (May 8) is fast approaching.

March 13 marked the final date for all competing political parties to submit parliamentary lists to the Independent Electoral Commission (IEC). The parliamentary lists are made of the representative of each party who will sit in the National Assembly – depending on how many seats the party wins.

The ruling party said that 20% of its 200 candidates are young people, who will play a critical role in the renewal and innovation of our legislatures and government, the party announced in a statement. The youngest candidate on its lists is 20 years old.

How Serious Is The Government’s Plan For Free Education?

The Democratic Alliance (DA) released its party list on March 18. The party federal executive chairperson James Selfe presented the list, saying: “Our lists are diverse in every sense race, gender, religion, sexual orientation, skills set, geography, class and the blend between youth and experience. When the people of South Africa look at the DA lists they will see themselves. No other party can claim to represent all South Africans.”

Mmusi Maimane places first one the list, with the party’s North West Premier Candidate Joe Mcgluwa at number three. The youth leader Luyolo Mphithi is at number 15. The former head of party policy Gwen Ngwenya is at 23 with DA councillor Thamsanqa Mabhena at 36.

How The DA Would Fix Higher Education

Pambo was one of the main student leaders of FMF at Wits. Keetse was elected as the spokesperson of the first EFFSC, later becoming the president of the student command. He is currently the national EFFSC president.

Chirwa was a student leader at the University of Pretoria (UP) during the height of FMF. and is a former national spokesperson for the EFFSC. Noted for her gender activism, in 2016 at the IEC centre she and three other activists took part in the #RememberKhwezi demonstrations.

During a January press conference, Malema announced that the parliamentary list were decided through secret ballot. Issues like gender balance, youth representation, geographic spread, criminal vetting, and political and organisational conduct were considered for the potential parliamentary representatives.

How has each party fared with youth issues

The ruling party goes the elections with former president Jacob Zuma’s free education plan as its adopted education plan. President Cyril Ramaphosa and finance minister Tito Mboweni both used the state of the nation and budget speech respectively to signal the adoption of the plan. This is despite the overwhelming evidence showing that the policy is collapsing for a lack of proper financing.

During FMF protests, the ANC often found itself on the wrong side of the protests when they backed the violent repression of the protests. Even now the ANC-government continues to stand against student issues without providing any concrete solutions – even in its manifesto.

The EFF, on the other hand, has always supported the Fees Must Fall movement, and has always championed youth issues. The EFF has previously shown its support for movements through direct representation in parliament.

In the 2014 elections, the EFF sent a Marikana activist Primrose Sonti to Parliament to ensure the voices of the community and widows of Marikana was heard. It then comes as no surprise for the party to give a platform to FMF activists.

The DA has never supported the free education movement and continues not to do so. Its plan for higher education – contained in its 2019 manifesto – is a comprehensive bursary package to students from low-income families who are unable to afford to study. The DA often condemns student protests, especially if the protests turn violent on campuses.

What it means for student leaders to enter government structures

In an earlier interview with The Daily Vox, political analyst Sithembile Mbete said it isn’t surprising at all that FMF leaders are moving into mainstream politics. Mbete was commenting on former Wits FMF leader Mcebo Dlamini competing for the position of ANCYL presidency last year.

That’s par for the course with youth movements and radical student movements. Many politicians not only in South Africa but all over the world cut their teeth on radical student politics, Mbete said.

However, Mbete said often student leaders who enter the mainstream often don’t remain as radical as they were in their youth. As people get older and join the responsibilities of adulthood, their politics change. That’s why we need a new cohort of student leaders who continue the cause or take up new causes that are emerging, she said.

It will be interesting to see how the young people will bring youth issues, particularly the woes with the higher education system, to the fore.