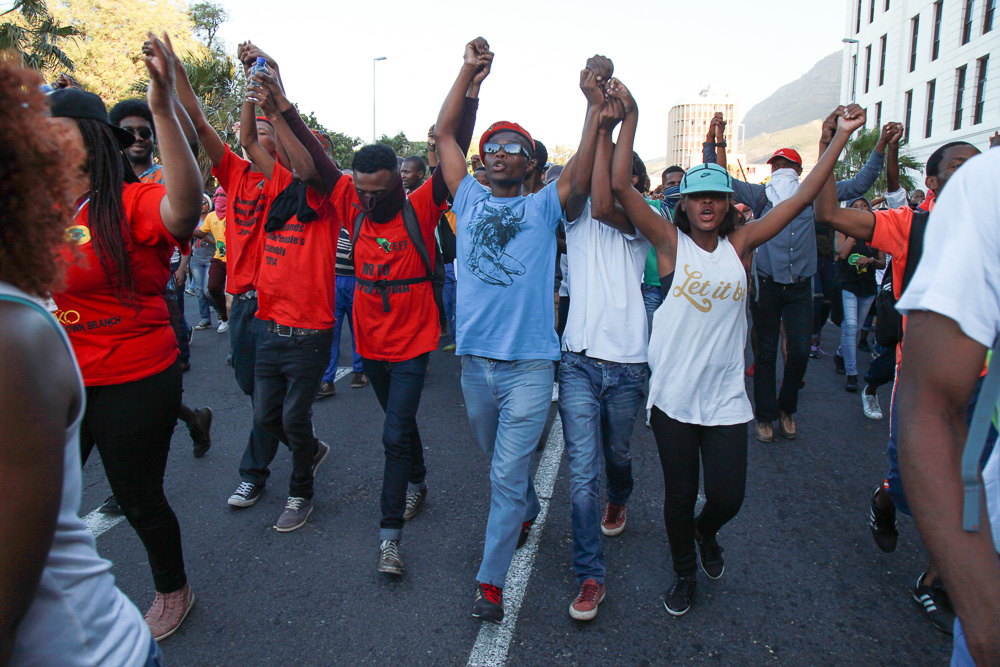 All academic activities at the the University of Witwatersrand (Wits) remain suspended on Monday, with many students readying themselves for another week of protest. An open planning meeting on Sunday was attended byÂ aÂ few hundred students.Â ManyÂ students expressed concerns about a continuing protest hindering their academic progress. Other students however insistÂ that the protest continue, acknowledging that the issues of outsourcing of workers and free education were not brought up.any students were given platform to speak and voice their concerns. It was eventually decided that the shutdown for tomorrowÂ will continue, and that aÂ University Senate meeting expected to take place at 11:00 will be turned into aÂ University Assembly, in front of all students, workers and staff present, to decide on a way forward.

At the University of Johannesburg, classes are expected to resume on Monday.

In Pretoria, managementÂ of theÂ Â Tshwane University of Technology say classes will resume on Monday. Students at TUT have however rejected President Zuma’s moratorium on fee increases for the 2016Â academic year and further protests are expected. At the University of Pretoria (UP), management has announced the resumption of the academic programme on Monday. However students heldÂ a mass meeting early on Monday morning and decided there to continue their protest. A small group of students have occupied the Client Services Centre and at least one lecture was disrupted this morning. Apart from the freeze on fees for next year, students have other issuesÂ which they want the university to resolve. TheÂ following correspondence from student leaders at Tuks outlines the students’ grievances. The university however has distributed a letter to students in which it has vowed to step up its assistance to financially qualifying students. Protesting students however, say the commitments are too vague. In Durban, at the University of Kwazulu Natal (UKZN), management have announced a resumption of the academic programme on Monday. However students at UKZN and Durban University of Technology (DUT) are expected to continue protesting.

At the University of Free State, academic and administrativeÂ activities will resume at all three campuses on Monday. However, the SRC willÂ deliver a memorandum to the Vice Chancellor Prof. Jansen on Tuesday. The university alsoÂ lifted a court interdict against protesters following President Zuma’s announcement of a 0% fee increase.

We will be having a silent march on Tues at 13:30, from the student centre to the Main building, to submit a memorandum to Prof.

The Â University of Western Cape (UWC) will also remain closed on Monday, and students are still occupying the Student Centre. Ra’eesa Pather spoke to Awongiwe Mango, 21, Bsc Biodiversity & Conservation Biology at UWC, one of the #UWCFeesMustFall leaders who said,Â “The 0% was the first step to getting the reassurance that our voices are more powerful than we thought it was was in unison, but then again, we can’t be deterred because now the revolution seeks to achieve free education, because our ideology has gone to the extent that education can’t come at a price and be available only to the highest bidder. 0% increment won’t liberate us from our debts and with that we won’t be able to liberate our people across the board. We want our people ‘less privileged’ to be on par with those that are privileged. So our fight has now escalated to that extent and we wont stop until we get there. Â

“Our internal grievances are the semi private expensive residence (Kovak) within our yard, that segregates students by class, [because they are more expensive than the university owned residences]. Historic debt at NFSAS also leaves you with a bulk loan to pay over nothing less than 10 years post graduation. “The way forward is we will meet the rector on Monday to respond to our grievances we shared with him on Friday. So I’m assuming the verdict of whether we should remain militant will come out of that address. We are still currently occupying the Student Centre. On Monday morning, we are mass mobilising to gather enough numbers for the Rector’s response.” The University of Cape Town (UCT)Â cancelled classes for the rest of the week.Â A fictitious message has also been broadcast claiming UCT students will sit their exams in January, sowing panic among some students. No such decision has been taken. Â Classes are however expected to resume at the University of Stellenbosch.Â  Â

At the University of Fort Hare, students will be marching to the local government seat in Bisho where they they plan to submit a memorandum to the Premier of the Eastern Cape. Other universities in the province have also been invited to attend the march. In PE however, classes will resume at Nelson Mandela Metropolitan University after a statement released by the university management declared President Zuma’s freeze on university fee increase as a “victory”.Â There appears however to be some discontent with the SRC’s decision to cease the protest at the university, with some students insisting that the protest continue.Â  Â

NMMU SRC are not bigger than students if they dont wanna take part.Students must must tell them where to fokof.They were elected by students â€” Fighter Piletso (@PiletsoT) October 25, 2015

While inÂ Grahamstown, classes are set to resume at Rhodes University on Monday.

Editor’s note: This post has been updated with new information.