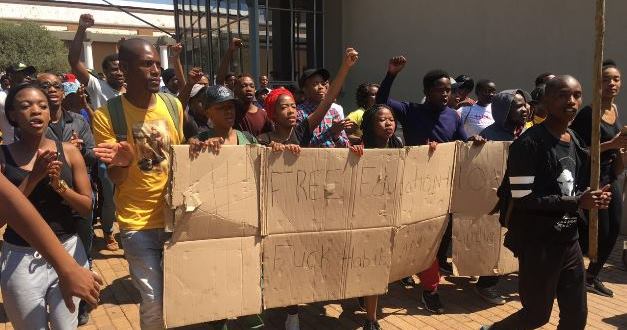 Ntando Sindane believes that the student struggle for free education in South Africa is in danger of making the same mistake that many revolutionary movements in history have made: failing to develop a hegemonic project capable of leading the broadest range of popular social forces.

The question of public sympathy for #FeesMustFall has been met with a knee-jerk response from student leaders. They say they wonâ€™t use the types of strategies that will entice public sympathy if it means watering down their course of action. The comrades who lead the struggle argue that solidarity from the various stakeholders in society should be unconditional. Student leaders stand on podiums and make a clarion call for society to enter the fray and fight alongside them. Adults reservedly pledge their support but rebuke students for their conduct, particularly when it is violent, saying things like: â€œYeah, we support free education butâ€¦ do these buildings really have to burn?â€ To many students firmly rooted in the picket lines, it is insensitive and hastily insincere for the public to want student leaders to commit to nonviolence in exchange for public solidarity and sympathy. Even more insensitive is the call for students to consider retreating in order to allow the academic programme to continue.

It is my contention that our #FeesMustFall campaign is isolated and it continues to isolate itself more and more as days go on. This observation is not a swipe at any of my fellow comrades and leaders who are at the helm of the movement. This must be looked at or engaged with soberly and with careful thought. In light of South Africaâ€™s potent capitalist machinery, an isolated struggle waged by students is extremely dangerous because it exposes the entire struggle to the same type of response that the post-1917 working-class movements received: being crushed by the state.

The discord between the students and the public is clear for all to see. It is ever clearer for the state. It deploys maximum police force, orders in blood-thirsty bouncers and detains the likes of Bonginkosi Khanyile, Amla Monageng, Rassie Rasethaba, Masixole Mlandu and others indefinitely. The state does all of these things with confidence and without fear of contradiction because it understands that the discord between students and the rest of society legitimises its violent crackdown on students.

At the sight of state violence, students respond with violence too, not knowing that this plays right into the hands of the state. The state knows it will always win this type of combat because students cannot sustain violent exchanges against a well-oiled state machinery. It is a given that the state will always crush students. The media assists in painting the picture that students are the ones instigating violence, which further deepens the discord between society and students whilst also legitimising state violence.

All these skirmishes speak to a deeper discord that defines the campaign for free education, and has affected working-class struggles throughout history. The demise of working-class movements of the world, especially after the fall of the USSR in 1991, is partly due to their failure to mobilise popular social forces in their various societies. These movements became overtly sectarian in their approach and conduct of the struggle, becoming isolated factions of their societies. Antonio Gramsci, an Italian Marxist imprisoned by the Fascist government in Italy in 1926, made some observations about the failure of working class formations outside the USSR after the Russian Revolution of 1917. He posited that part of the reason for the failure of revolutionary struggles was that these working class formations isolated themselves from popular social forces. These forces, as they later learned, proved to be strategic centres of power. The lack of popular support made it easy for capitalist states to neatly crush and cheaply brutalise all these working-class movements everywhere in the world where they tried to emulate the Bolshevik Revolution of 1917.

Whichever way you look at it, the isolation deepens and the grip students have on the department of higher education begins to loosen. The solution lies in the problem itself. It begins with coming to terms with the rigid fact that the call for free education is not a small project and that in order to attain this historic feat, there can never be shortcuts. For us to think that we will win free education in our lifetime without having completely mobilised all sectors of society is a pipe dream. Equally, for us to expect the rest of society to automatically identify with our struggle solely because they might have been students before, or because they are parents of students, or because they hear us on radio and TV speaking about free education is naive.

A hegemonic project ought to be the driver of the struggle in our campuses. Sleeves must be rolled up and all activists must begin to lobby society forthrightly and honestly. The fiery speeches in our campuses are not enough, have never been enough and are not going to take us further than where currently are.

Ntando â€œChairmanâ€ Sindane is a proud member of EFFSC. He is a final year LLB student and an African Communist.