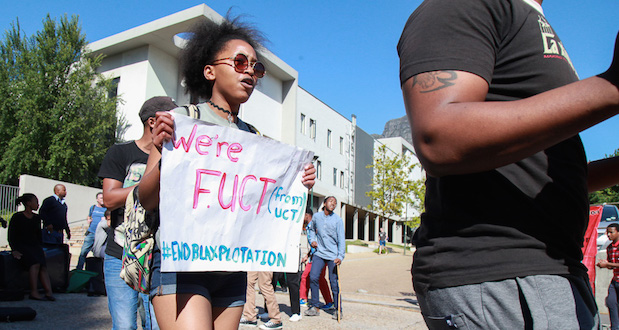 The University of Cape Town was on Monday afternoon granted a court interdict preventing student protestors from “disrupting or otherwise interfering in any way with the normal activities of the university”. RA’EESA PATHER reports.

Ru Slayen, a student involved in the Rhodes Must Fall movement, read out the court order outside the university’s administrative offices, Bremner building, around 5:30pm.

News of the court order stunned the protestors, who were particularly taken aback by the references to arson contained in the court order. Except for two incidents earlier in the day in which people trying to enter the campus had driven cars through groups of protestors, the demonstrations on campus have been peaceful. The students heckled acting vice-chancellor Francis Petersen, arguing that management had acted in bad faith. “We engaged you peacefully. We did not hurt you, we did not touch you,” one student told Petersen.

“Do you know what’s unlawful? Me being barricaded from a university because I can’t afford it” #FeesMustFall pic.twitter.com/lYr6LSdMz4 â€” raeesa pather (@raediology) October 19, 2015

Peterson responded saying that management was prepared to meet with students. However, the students were unhappy with this, arguing that they’d wanted to meet in Bremner Building earlier in the day but that management had told them that they should meet in the parking lot.

In a move reminiscent of the Friday’s #WitsFeesMustFall protest, the students demanded that the university’s executive committee meet with them tonight.

A small group of students had earlier broken into Bremner building, with the intention of occupying the space but they later left following resistance from the rest of the protestors who argued that their plan of action concerned blockading the university, not occupying it. After hearing about the court interdict, they revised their position and their intention now is to occupy the building for the night or until police arrive to remove them.