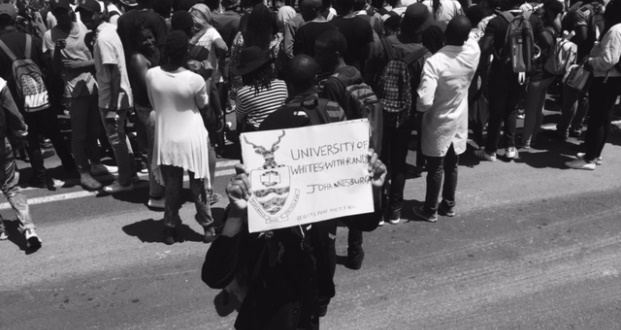 When #FeesMustFall protests first hit South Africa last year, writer MONAKO DIBETLE wasn’t convinced they would have much of an effect. But he was proven wrong. He explains why a 0% fee increase is not enough, and why the NSFAS system needs to be reformed to include middle-class students.

In the wake of the #FeesMustFall campaign in November 2015, I watched with moderate interest how the student anti-tuition fee increment campaign has evolved over the years since my first registration as a freshman at an institution of higher learning.

The #FeesMustFall campaign did not initially excite me, and I thought of it as one of the many demonstrations against fee increases – just like the ones we had when I was still a technikon student. Experience has taught me that as a result ofÂ these on-campus demonstrations, the universities would still maintain the fee increases, albeit at lower percentages than had initially announced.

Frankly, I thought of #FeesMustFall as a bluff and that government and university councils will ultimately have their way, as in many instances before.

How wrong was I?

However, the developments which followed the mass studentsâ€™ demonstrations of November 2015 made an impression on me. The recent resurfacing of demonstrations, despite a â€œzero fees increase in 2016â€ commitment made by the president of the republic and the ministry of higher education late last year, further made me realise that thereâ€™s more to #FeesMustFall than I had initially anticipated.

What stood out the most for me, however, was that the fees demonstrations were for the first time led by a racially diverse collective of students attending affluent traditional universities such as Wits, UCT and Stellenbosch. It was refreshing to finally see these students joining on an old campaign which was previously spearheaded by poor, often academically excluded students in neglected technikons and former â€œbush colleges.â€ Their participation gave the #FeesMustFall campaign national prominence and a global audience â€“ thanks to the hashtag.

When I was a student, it was known that at the beginning of each year during university registrations, students across the country would invariably hold demonstrations against tuition fee increases. Similar demonstrations would be held later in the year, just before sitting for final examinations â€“ akin to #FeesMustFall in November 2015. These events also invariably brought with them the unfortunate vandalism of institutionsâ€™ property, looting of the campus cafeteria and a generally violent behaviour exhibited by students. However, these wild and often violent demonstrations were synonymous with selective types of institutions of higher learning â€“ those less prestigious institutions offering sub-standard higher education thatÂ admit mostly the previously disadvantaged majority.

The struggle for low registration and tuition fees belonged to poor students in previously black institutions, and only the poor took to the streets demanding reprieve from annually escalating higher education costs.

This week though, as the #FeesMustFall campaign took to campuses again and disturbed registration at various institutions in Gauteng, I felt a little bit at ease when the higher education ministry announced further budget increases to address this matter. But what further eased my concern was the pronouncement by Higher Education Minister Blade Nzimande that students do not need to pay upfront registration fees. He also suggested a planned inquiry on the accessibility of tertiary education which will look into the issue of students who don’t qualify for NSFAS but who still can’t afford their fees. It’s quite interesting to hearÂ that coming from Nzimande, who notoriously remarked that “students must fall”, during the height of the #FeesMustFall campaign last year.

I think it makes sense to expand the NSFAS to include middle-class students who have been excluded from government funding for a very long time. What do I mean by this? Well, qualification for financial assistance by NSFAS has rather stringent requisites which are to some degree exclusionary towards the middle class student. A student whose parents are in governmentâ€™s payroll or fall within the South African range of â€œmiddle income class (R5000 to R40 000 monthly household income after tax), for instance, does not qualify for NSFAS assistance, as their parents are considered earning enough to can register and keep them at university â€“ buying of books and stationery, paying residential and meal fees, and covering the daily expenses of campus living. Often, these parents can barely survive on what they earn, let alone paying exorbitant university tuition fees. Being excluded from NSFAS assistance can as a result lead to academic exclusion on the basis of not affording university tuition fees and most concerning, broken dreams.

It is also worth noting that in South Africa this kind of exclusion is not only limited to tertiary education. By the time a township or village learner from a poor family reaches matric, the design of the schooling system and geographical location of the school have already dealt them a massive blow and the effects are lifelong. According to the University of Cape Townâ€™s (UCT) 2015 Child Gauge report, poor school performance in South Africa reinforces social inequality and leads to a situation where children inherit the social position of their parents, irrespective of their motivation or ability. The study further found that low-quality education becomes a poverty trap from which it is almost impossible to escape. What is more alarming is that this situation applies to the vast majority of learners in South Africa.

So, achieving that tertiary qualification, regardless of the prestige of the university that bequeaths it to the student, is of utmost importance as it is the key to a rather better future and lifestyle (not the best though) than that of the studentâ€™s parents.

Just to bring this matter a bit closer to home: I did not qualify for NSFAS because of my civil servant parent, although I needed it. This affected my choice of university and field of study because I had to opt for something which my parents could afford. Although I ended up receivingÂ my four-year technikon degree, the financial strain caused by my being at school on the family was evident in many aspects of our everyday lives. It is disturbing to know, despite having done well for myself, that I had initially wanted my life and career to have taken a different route. I became a victim of an exclusionary system based on a perceived financial capability afforded to my parents, which is linked to them being well-paid civil servants.

Many government aid deserving students across the country have experienced this kind of exclusion, and many more are yet to experience it. Not all of them will be as fortunate as I have been, though, unless drastic action is taken to expand eligibility for government aid to all students who academically deserve quality higher education.

Monako Dibetle is a Johannesburg based independent writer and former education and grassroots journalist for the Mail & Guardian newspaper.