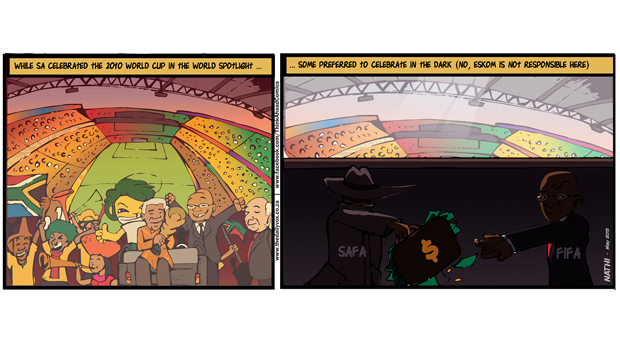 Think back to June 2010. Even the most cynical South Africans were swept up by the infectious atmosphere of hosting a soccer World Cup. We started to believe that maybe the rainbow nation wasnâ€™t a myth after all; that Bafana Bafana might just squeeze through to the knockout rounds; hell, even that BaGhana BaGhana couldâ€™ve taken home the trophy if Uruguay hadnâ€™t been such dirty cheats.

And the fact that Fifa basically took over our country for sixÂ weeks; that millions were spent on white elephant stadiums; and that much-touted economic benefits for South Africa failed to materialise? Weâ€™d think about such pesky issues when the last vuvuzela had been sounded, and Phillip had left the stadium.

But we never did examine the ramifications of our awfully big World Cup adventure, not really. Until now.

On Wednesday, the US announced the results of an investigation into Fifa â€“ and arrested 10 officials to boot. That wolf in wolfâ€™s clothing, Sepp Blatter, seems to have escaped censure but two â€œhigh-rankingâ€ South African officials, who remain unnamed â€“ for now â€“ are referenced in the indictment. The report states that these officials paid Fifa officials $10-million for the dubious honour of hosting the World Cup.

South Africa 2010 doesnâ€™t seem like such fun and games now, does it? While even Eskom pulled it together and kept the lights on for the World Cup, our officials were counting on a cloak of darkness to shield their murky dealings.

Sports and recreation minister Fikile Mbalula has come out all guns blazing, claiming that South Africa never bribed anyone, and that the investigation is pure speculation.

But for anyone whoâ€™s read anything by investigative journalist Andrew JenningsÂ , whoâ€™s made it his mission in life to expose Fifa, such certainty is impossible. As we wait for further information to emerge, we can only thank the US for casting some light on the situation.