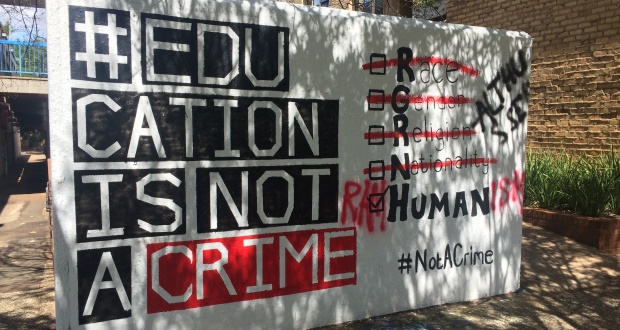 With so much action going on at universities this year, itâ€™s hard to keep up with what the different Fees Must Fall movements at each university are upto. The Daily Vox spoke to five fallists from universities across the country to catch find out where to from here.

What is the current status of the Fees Must Fall movement at your university?

[dropcap]â€œ[/dropcap]A lot has happened at the university currently known as Rhodes to caution fallists against protesting. The interdict has silenced students and derailed the movement. We have been afraid to protest because of the legal implications. We are trying to connect all the constituencies. We want to involve everyone this year. There have been serious issues of intersectionality.

We understand that we want 0% fee increase and we want free education. We want to explore new models for acquiring free education. I am also curious about what we did previously to get to the place where we currently are.â€ – Lazola Kati, student, the University Currently Known as Rhodes

[dropcap]â€œ[/dropcap]There have been a lot of splits at the University of Cape Town because people are not wanting to deal with the difficulties within the movement around homophobia, queerphobia, transphobia, patriarchy and misogyny. That has resulted in women and queer bodies who have put themselves on the line no longer wanting to do that because they donâ€™t feel welcome.â€ – Alex Hotz, expelled student and Rhodes Must Fall activist, UCT

How have suspensions and interdicts impacted the capacity of the movement?

[dropcap]â€œ[/dropcap]The nature of the repression we are experiencing both at an institutional and national level criminalises protests at universities. It makes it really difficult to do things the way we know how to do them. We have to adopt different mechanisms to sway the system in a particular way.

Currently, we are doing a sit-in at the library which is a peaceful protest where we are just defying the curfew. Our comrades canâ€™t participate in something like this because they were put on a â€œsuspended suspensionâ€ which is a threat against taking any action. Itâ€™s very crippling to be put under these circumstances. I have my doubts about whether the different factions of the movement can come together and mobilise before the end of the year. A lot of us are willing to put everything on the line to make that happen.â€ – Simone Cupido, Fees Must FallÂ activist, Stellenbosch University.

Do you think the Fees Commission will assist in developing solutions for financial stability and new educational policies in universities?

[dropcap]â€œ[/dropcap]I donâ€™t think the Fees Commission is going to do anything, like every other commission that has ever been set up by the government. The Truth and Reconciliation Commission did not do anything, the Marikana Commission didn’t do much either. It was just about quelling the rage of the black people in this country. It’s just an advisory commission for the Minister of Education and the Presidency. They have invited academics, vice chancellors and administrators to make presentations. None of this has been done in consultations with students. They have handpicked a couple of students but they donâ€™t represent the studentsâ€™ movement for free education and I think that is hugely problematic.

Last year, certain student organisations and the ANC government made people think that fees had fallen. We didn’t ask for a 0% fee increment, we are asking for free education and that is fundamentally different. We are asking for free decolonised, socialistic and black-centred education which fundamentally deals with access to the university. We are talking about how representation matters at the university. And how to retain students at the university irrespective of how well they do. We are saying education is a right, not a privilege.â€ – Alex Hotz

Is there a possibility for mass mobilisation before the end of this year?

[dropcap]â€œ[/dropcap]We are at the stage where we are gaining momentum and public support. People are becoming more aware of what is happening at UKZN. The movement has the potential to grow and to be more than what it is currently. We have been getting support from academic staff and other institutions. People from various organisations have approached us offering their assistance on various issues. It’s important to take into consideration the material conditions that exist in UKZN which is mostly comprised of students that come from impoverished backgrounds. The majority of the fallists at Wits and UCT come from the middle class. This is something that we must take into consideration as well. The movement goes beyond political affiliations and individualism because our identity must remain as one. It must remain that of the Fees Must Fall movement.â€ – Siphelele Nguse, SRC president and Fees Must Fall activist, UKZN

Do you think there is a need to adopt different strategies?

[dropcap]â€œ[/dropcap]We canâ€™t engage in strategy because students are not willing to come together for a #FeesMustFall meeting at the moment. Although we are in solidarity with UKZN and what happened there, people don’t understand why protests must come about again. We need to think about how we are going to mobilise around the same ideological standing so that we donâ€™t make the same mistakes as last year. Then we need to get this ideology out to students in alternative and strategic ways. I think we should no longer hold meetings at Solomon House or anywhere on campus.

We need to think about unconventional ways of agitating outside of the university. The fight for free decolonised education is not institutional but it is rather a fight against the state. It’s not the university but that state that is refusing us free education. We need to see how we can work with the university or how we can conscientise the masses enough to go directly for the state.â€

At the moment, Wits is presenting their private security as just civilians walking around campus. They are no longer in their uniforms but they are still following some cadres here and there. Specifically those attending the disciplinary hearings that started last week. Private security is not only being used as a form of protection for the university, the staff and the students as the vice chancellor says, but now they are being used as spies. This is more dangerous than anything else and this scares us comrades. The university is prepared for any physical action that may occur. They are able to pre-empt any kind of direct action that we might employ on campuses.” – Busisiwe Seabe, suspended Fees Must Fall activist, Wits University