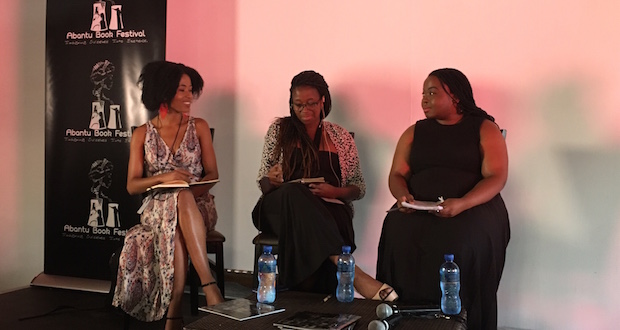 The Daily Vox had the pleasure of attending the first day of the Abantu Book Festival at the Eyethu Lifestyle Centre in Soweto. It began with a panel discussion on â€œWriting and rioting womxn in the time of Fallismâ€. The panelists were Sandy Ndelu and Mbali Matandela – fallists from the University of Cape Town who were part of the Rhodes Must Fall movement – and Simamkele Dlakavu, from the University of Witwatersrand, a prominent figure of the Fees Must Fall movement and member of the Economic Freedom Fighters.

Hereâ€™s what we learned in the dayâ€™s first session.

1. History erases the work of black *womxn, so writing while rioting is revolutionary work

Historically, colonialism erased and destroyed the social history of black people, but black womxn in general still face erasure in activist spaces – where men are more likely to be the narrators of the history or the ones idolised within it. The act of writing for black womxn is thus necessary to ensure this erasure does not take place, but also for black womxn to tell their own stories.

“One of my the things that is important to me is to write myself, as a queer, trans body, into history” – Sandy #AbantuBookFest

2. Black womxn are either erased within fallism, or individually celebrated – this binary must be broken

Dlakavu noted that, aside from erasure, the tendency within the movement was to individually celebrate and idolise specific leaders within fallism. In this way the movement centres specific womxn, while the collective narrative of womxn in struggle spaces remain secondary.

3. Thereâ€™s a need to incorporate African languages into fallist writing and activism

An audience member pointed out that there was a tension that existed in fallists pushing towards decolonisation, yet still centring the English language over the languages from the homes we come from.

Audience member: how do we include our own languages in our writing and activism? #AbantuBookFest pic.twitter.com/s3JGhriU3x

Well, there’s a lot that needs to be unlearned.

4. While being decolonial activists, fallists are still colonial subjects with a lot of internal work and unlearning to do

As much as fallists are activists who are actively pushing for changes within society, all of us are still colonised subjects whoâ€™ve been conditioned in various ways – thereâ€™s much unlearning to do. This includes how many continue to centre the English language and the gender binary within our writing and activism. This means that as much fallists attempt to externally change systems, thereâ€™s also a great deal of effort that must be put into internally challenging the ways in which weâ€™ve been colonised.

“As much as we’re activists, we must also realise that we’re still colonial subjects” – @Eyakwa_Ndelu pic.twitter.com/fLhn4sAPJf

It was pointed out that thereâ€™s a need for a national black feminist movement that legitimately centres the interests and concerns of black womxn in South Africa. While currently there are individual enclaves of black feminists doing amazing work, many in the audience and panel suggested that the lack of a mass black feminist movement was the reason why pressing issues such as rape and the murder of lesbians werenâ€™t given the attention they required on the national agenda.

In closing @MbaliMatandela puts out call to action for womxn in the space to chat about the formation of a national black feminist movement pic.twitter.com/4eUOlZjazk