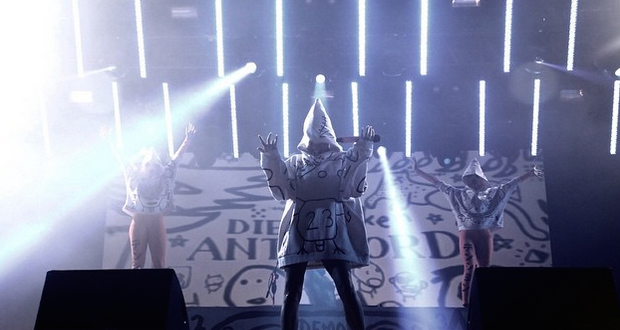 Racism is alive, well and kicking ever so freely in the music business. It seems itâ€™s not enough to simply entertain a crowd these days â€“ some musicians feel they have to use their concerts to drum up publicity by upping the shock factor. FIRDAUS KHAN sums up five acts that crossed the line.

1. â€œMy mamma used to say only Jesus can save usâ€
Kanye West’s 2013 album, Yeezus, in which he described himself as â€œa close highâ€Â to God, caused online rows and religious controversy, but if that werenâ€™t enough, a performance he did in the same year featured a â€œwhite Jesusâ€, which some Christians found disrespectful. And the cherry on top? Outside the venue, T-shirts featuring the Confederate flag, an infamous mark of slavery and segregation, along with a caption which said â€œI ainâ€™t cominâ€™ downâ€ were sold.

2. â€œNow we’re talking astrology, getting our nails did all Japanese-yâ€
Katy Perryâ€™s 2014 song This Is How We Do brought up all kinds of racial stereotyping with its lines about â€œJapanese-yâ€Â nails (whatever those are) and â€œchique at La Super Rica, grabbing tacosâ€. The 2013 American Music Awards also saw herÂ perform the songÂ Unconditionally dressed as a geisha. Weâ€™re still not sure how the costume and the song related, and while Perry has claimed that her interest in other cultures is a doting obsession, it doesnâ€™t always translate that way.

3. â€œTo my home girls here with the big butt…â€
Miley Cyrusâ€™ twerking made headlines around the world for its shock-value and humour, but also for its cultural [in]appropriation.

Twerking, which sprung from Jamaican and New Orleans dance styles, is characterised as part of ratchetÂ culture, and Cyrus â€“ who once said that she wants to make music that â€œfeels blackâ€ â€“ drew a slew of criticism for â€œaccessorisingâ€ with black people and for her cultural appropriation of twerking.

4. â€œMy brother said some racist shit a couple years backâ€
Last year, rapper Macklemore donned a plastic hook-nose and fake beard to sing his hit single Thrift Shop, drawing criticisms of anti-semitism. HeÂ denied the allegations, saying the get-up had been a last minute attempt to disguise himself using items from a costume store on his website, before arriving incognito and surprising the audience. But fans werenâ€™t buying it.

.@macklemore really?? Because if I told someone to put together an anti Semitic Jew costume, they’d have that exact shopping list. â€” Seth Rogen (@Sethrogen) May 19, 2014

Added to their routine use of blackface and vividly racist lyrics, you have to ask why Die Antwoord are still en vogue.

@johnwilkezbooty their set at ultra had videos of each member of die antwoord putting on KKK masks and outfits in their video. just my view

im pissed because die antwoord SOUNDS cool but they literally had a video with blackface in it and seem really racist even w/o that? â€” deadlock (@HYPERlONCORP) April 23, 2015

So, are these just careless slips or carefully calculated publicity stunts?Â Give us your take in the comments.