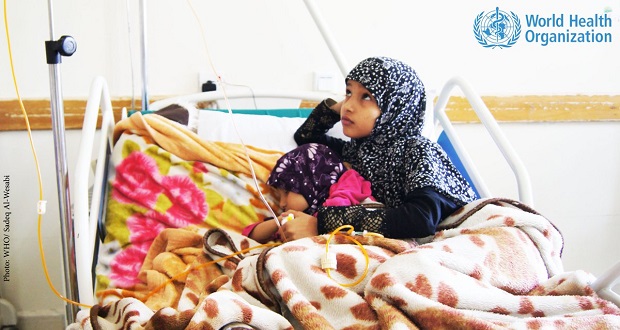 For more than 22 months, a coalition of Arab states led by Saudi Arabia have been pounding Yemen, the Middle East’s poorest country, with near-daily air strikes.

M/than 200.000 AirStrikes by #Saudi aggression fighters on #Yemen since 22 months all are #US-backed,logistic,refueling,Spy satellites, etc. pic.twitter.com/MwAUccBAxt

Attempting to roll back advances made by the Houthis, a group of Shia rebels that control the capital and vast swathes of the country, the coalition has dropped more than 8, 600 bombs – destroying schools, hospitals, factories, heritage sites, refugee camps and homes.

Trade and businesses have been all but decimated, more than half of all health facilities have been forced to close and the United Nations peace envoy recently warned that the country was teetering on the “brink of the abyss”. More than 21 million Yemenis are in need of some form of aid, and at least 7.6 million are “severely food-insecure”.

While over 120,000 have fled to other countries, including war-ravaged Somalia, more than 2.4 million have been forced out of their homes to other areas of the country.

However, families too poor to flee or those living under siege have had their lives torn apart by attacks inflicted by both the coalition and the rebels.

Families in #Yemen are struggling for food.Many are broke,hurt & hungry. Everybody is in pain.I am not talking poor but middle class. ðŸ’” pic.twitter.com/EanarSRtY2

Calculating a precise death toll is a near impossible task but, according to the UN, at least 10, 000 people have been killed, including around 1, 400 children.

With the violence showing no signs of abating, several organisations are helping provide food, water and medical supplies to those desperately in need. So here are five practical ways you can help.

1. Donate to relief efforts
The Saudi-led coalition has imposed an aerial and naval blockade on Yemen, but several local and international NGOs are still on the ground.

Doctors without Borders, Red Crescent, and Oxfam are doing tremendous work helping those in hard to reach places, in particular those precariously at risk of famine.

Many of these organisations rely heavily on private donations, so give generously.

2. Join demonstrations where you live
Protests have been held across the world, from London to New York, Jakarta to Karachi.

I just arrived at the protest against #Saudi crimes against #Yemen & #Bahrain outside the Saudi Embassy London. pic.twitter.com/7th9R3QBe6

By being in the open, demonstrations garner more attention than individual statements, Twitter posts and Facebook posts ever could. So help break the fear that silences communities by attending rallies in your local area. If their aren’t any, hit up your friends and organise one.

3. Contact your local councillor, MP or senator
Saudi Arabia invests tens of millions of dollars each year in public relations, so make sure to bombard your local representatives with phone calls and emails and let them know you want them to do more than just “condemn” the violence. Tell your local representatives that refugee families are welcome in your area and you’d would be willing to foster an unaccompanied refugee child if need be.

Pressure your representatives to provide emergency funding for victims and call on world leaders to demand an international probe into human rights abuses. It’s important to note that Yemenis don’t want a no-fly-zone or foreign interference but a cessation of hostilities. Champion their cause, don’t impose your own.

4. Airbnb your flat/house to refugees
Refugees are in need of everything from clothes to food assistance and legal advice, but one thing that is crucial for any asylum seeker adjust to a new environment is housing. Put your spare room/flat/home on AirBnB for $10, the minimum amount the site allows, and ask that only refugees contact you. Once the guests arrive, reimburse the $10 and help restore their faith in humanity.

5. Support the global refugee effort
Nearly 60 million people were forced from their homes in 2014 because of war, conflict or persecution, a statistic not seen since World War II.

With thousands dying each month while trying to escape the fighting, a failure to respond risks further conflict, triggering further refugee flows. Speak out in support of refugees – whether it be online or in public, fight racism and xenophobia, and listen to the stories of refugees.